So as you may have gathered, I didn’t manage to get a preview completed yesterday in between the 2 hours of me getting up and going to work , so yeah, apologies etc!

It turned out to be a day for the breakaway, like I thought it might, and in the end Kennaugh took a strong win ahead of former team-mate Swift.

Herrada held onto an attacking Bardet and outsprinted the Frenchman to nab third place on the day.

Maybe I should blog less often?!

Behind, Porte looked imperious with only Fuglsang able to hold onto the wheel of the Australia, with Froome coming off worst out of the GC contenders. It means that Porte has a minute buffer over the Brit going into the final stage tomorrow and you would expect that to be enough to hold on for title.

Let’s have a look at what’s in store for them.

A short and intense day to end the race!

The road rises from the gun with a tricky, uncategorised climb before flattening out and rising almost all the way until the first summit of the day. I expect a lot of riders to be on rollers!

The opening three climbs aren’t too difficult in terms of average gradient but with them coming in quick succession we might see a few riders who are on a bad day struggle.

With 35km to go the riders will crest the penultimate climb and face a 15km descent before hitting the valley roads that see them travel to the foot slopes of the Plateau de Solaison.  The “easy” gradients on the earlier climbs are certainly made up for here! 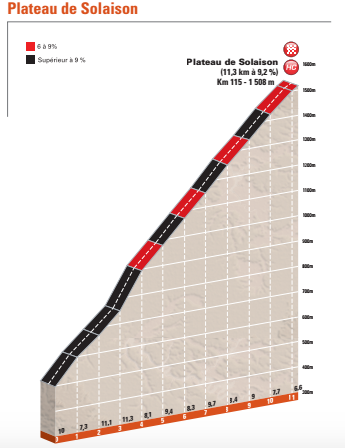 11.3km at 9.2% it’s another brute of a climb for the riders to deal with! Thankfully for some, the gradient does ease a little by the top down to a measly 7% roughly…

Will we see a solo winner again?

It’s a really tough stage to call as we could see some early GC fireworks but there is also the possibility the break makes it all the way.

With Porte having such a big lead and looking so strong, I’m not sure how willing other riders will be to spend a lot of energy early on to animate the race only for the Australian to be able to follow everything easily. Furthermore, BMC have looked strong so far and have been able to hold everything together reasonably well and I would expect a similar performance from them tomorrow.

It also all depends on where the breakaway goes and who’s represented. I think we’ll see it get up the road on the first categorised climb so it should be filled with strong climbers who are capable of winning the stage. If no GC rider has sneaked their way in and enough teams are represented then I think it can go all the way.

A few darts to be thrown here…

The young Austrailian has been very consistent so far this Dauphiné and finds himself sitting 26th on GC, almost 10 minutes down on his compatriot. With Yates and Chaves underperforming, Orica will no doubt be looking towards the breakaway for success. Could Haig take a memorable win?

The winner of the Tour de Yorkshire this year, the Belgian always seems to find himself in a breakaway at some point during a week-long stage race. He’s not been in one so far, but that could well change tomorrow! Having been so close to a win at the Tour last year (on the farcical Alpe d’Huez stage) coming up against a flying De Gendt, he has proven that he can climb exceptionally well. In the right move he has every chance.

After his early season return to form, the Pole but in a great shift for Froome today, pacing the GC group. Is he eyeing up a spot in their Tour mountain train?! With Froome suffering, I think we could see Kwiatkowski “set-free” like Kennaugh was and to chase his own personal glory. Clearly going well, I have him as my favourite for the stage. He just has to make the break first…

I like to throw an obscure name into these every so often, but the Ecuadorian is a rider you will be hearing a lot about over the next few years. Extremely talented, he picked up a second place behind Yates (Adam) and ahead of Uran at the GP Industria earlier in the year. Since then, he has gone on to pick up two top-10s on GC at 2.1 races. Not bad for a first season in Europe and in the pro peloton! I’m not sure how he’ll fare over the longer climbs but I am keen to watch on with interest!

As I said above, if Kwiatkowski makes the move, then I can’t see many riders beating him. Sky to go back to back! 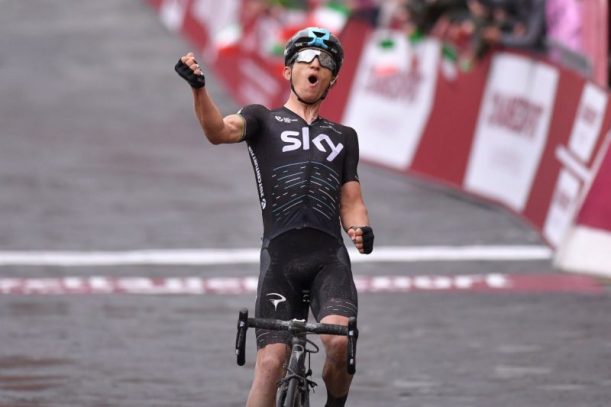 Tweeted this out before…

I think they’re still both value at 66/1 and 80/1 respectively so would still recommend it.

Thanks as always for reading and as usual any feedback is greatly appreciated! Who do you think will win tomorrow? Will it be another GC showdown or will the break have its day again?

I shall be back for the British national champs (men and women) and if I get bored, then maybe a .1 or .HC race in-between somewhere. Anyway,