A day where all the action was in the final few kilometres and that once again saw Gaviria win the sprint. He didn’t have it all his own way this time though, as he had to come from 20m back, delivering a truly impressive turn of speed to pip Bennett before the line.

As for Ewan, I thought he had the win in the bag with roughly 300m to go. Richeze was giving him the perfect lead-out but the Aussie rider seemed to hesitate and got boxed in by both Richeze and the Bora lead-out rider (I’m assuming Selig). It looks to me as he’s lost some confidence over the past week as the Ewan we saw at the start of the year would have squeezed his way out of that one or committed to going around the other side.

Let’s have a look at what’s in store for them tomorrow.

The third stage in a row that is all about the closing 20km. Not exactly prime viewing for a Saturday afternoon!

Thankfully it’s the shortest stage of the race so it shouldn’t be too long until we get to the main event of the day which is the climb to Oropa.

The road actually rises for around 15km before the climb properly starts once the peloton passes through the town of Biella. 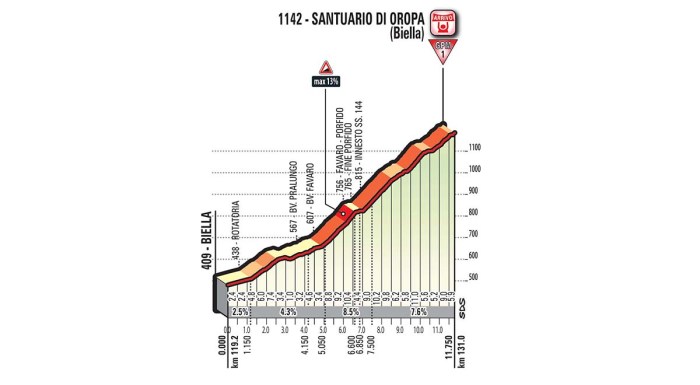 11.75km long averaging 6.2%, it is a fairly tough climb but it is the second half that is the most difficult. After the opening 5km, the gradient barely dips below 7% for the rest of the climb, although there are a few false flats and shallower sections involved.

With these steep ramps near the top, you would expect the climb to suit a more diminutive rider/mountain goat who can manage a more explosive kick on the tougher stuff. However, with the easy run in to the climb, everyone should arrive fresh and I wouldn’t expect the gaps to be too big at the end of the day. 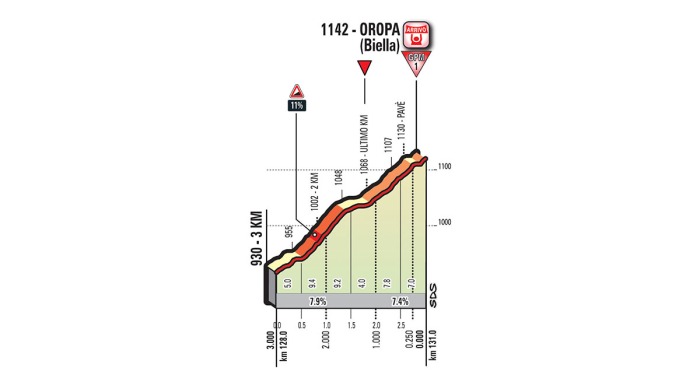 The climb was last used in the 2014 edition and that saw a break stay away after a much harder run in to the foot slopes. Quintana managed to take a few seconds over his GC rivals but the gaps were not massive. Will we see something similar this year or will Movistar close down any breakaway in the hope to set up Quintana to take some bonus seconds?

It is one of those 50/50 days where it could go to either the break or the GC guys.

In favour of the GC guys, it is a short stage with a lot of flat which should in theory make it easy for them to control.

However, a lot of the riders will know Quintana will fancy it so I’m not sure if their teams will want to assist with any work to help chase down the breakaway.

I imagine Sunweb will be quite happy to ride it defensively and let the break get up the road to take the stage win. Dumoulin himself said in his post-race interview that tomorrow will be a relatively easy day with a 20-minute climb at the end. He sounds confident in his abilities to follow everyone else and to be honest, I am too.

Originally I was 100% behind this being a definite GC day, but the more I think about it (which is never a good thing) the more I am leaning towards the break staying away. It all depends on the number of riders to make the break and the teams represented, but also on Movistar’s attitude. They tried something on stage 11 but that didn’t really work out for them so they might keep their powder dry for later in the race and just hope to tire Sunweb out by allowing them to control the pace.

So with that being said, it’s time to play everyone’s favourite game…

The issue now is that for a rider to win then they need to be a good climber, but to get into the break they also need to be strong on the flat as well. A good slice of luck is important too! Nonetheless, I shall throw a few names into the proverbial hat. With the stage starting in the Coppi’s hometown I’m sure the Italians will want to feature in the move…

Valerio Conti – Bitterly disappointed to have crashed when in with a chance of the win on stage 8, he’s bound to have another go over the next week or so. He looked great on the climbs that day, although a little too lively at times, but with it being only one big effort so to say he should be in with a chance.

Manuel Senni – The Italian was struggling at the start of the race but he seems to have recovered from that. With Van Garderen struggling, BMC will be attacking for the rest of the race and the young Italian climber might salvage something for the American outfit.

Michael Woods – After Cannondale overcame their World Tour drought in California, they could well go on to pick up another win here. The Canadian is far enough down on GC not to be a threat and the steep gradients look great for him. He also has the possibility of maybe contending for the stage from the bunch as well if he’s given freedom that way.

Vasil Kiryienka – Sky are most definitely chasing stages now so I’ll be very surprised not to see them in the move tomorrow. Kiryienka is a strong enough on the flat to make the move but he will need to attack solo before the steep parts of the climb if he wants to have a chance of winning.

No #Wongshot from me today as I don’t have enough time!

If it comes down to the GC contenders, it is hard to see past Quintana.

As I’m not convinced either way how it will play out tomorrow then I’ll have a few small punts on the breakers;

Quintana at 2/1 is a great price if you think it is a definite GC day but because of the nagging doubt in my head, I can’t be backing that!

Thanks as always for reading! Who do you think will win tomorrow? Will a break make it or will Quintana be victorious? Anyway,