We did get that inevitable sprint in the end, with no turning of the wind in the morning. Much to my disappointment!

It was Gaviria and QuickStep who timed the charge to the line perfectly in a tricky head-wind sprint, beating a fast finishing Mareczko and Bennett to the line.

Will the Colombian be there to compete at the finish line tomorrow? Let’s have a look at what’s in store for the riders tomorrow.

Back onto mainland Italy, we head north along the west coast of the country to Terme Liugiane. At 217km it is a long day out in the saddle for the riders but surprisingly it is only the 6th longest stage of the race!

A flat start to the day changes after 25km where we have the first categorised climb of the day, before a descent and a run towards the TV’s which really should be KOMs more than anything!

Once we pass the second TV, the parcours is flat for the following 100km or so but it is in the last 30km of the day where things start to get interesting and the road starts undulating more seriously again. At roughly 25km to go we have a 1.5km climb that averages over 7% and this should shake out some of the sprinters. A short descent follows before it kicks up again for another kilometre before continuing the descent again.

The penultimate rise before the line which crests at 5km to go. Averaging 5.9% for a kilometre it’s not too tough but it will be attacked at a fast pace because there is a very technical section once they are over the top.

The quick succession of hairpins will string things out even more as they continue towards the finish. A series of false flat and shallow descending will take riders to the 2km to go banner where they turn left and start climbing to the line.

Initially the rise is not that steep, roughly 2% for a kilometre, but the second kilometre is closer to 7% with a 10% max gradient.

You don’t want to open up the effort too early and be left flagging by the line. It’s the same finished that was used back in 2003 so you can get a rough idea of who will be fighting for the win.

Break or no break? That is the question.

As so often is the case when we get stages that don’t have a clear narrative, i.e. the nailed on sprint stage such as today, we’re once again left discussing if the break makes it or not.

Over the past few stages we have had no “fight” at all to make the move, with the longest it taking being 11km back on stage 3 for the escapees to get a sizeable gap. Furthermore, we haven’t had a big group go yet either, with most of the breakaways consisting of 4 riders.

However, I think all of that will change tomorrow and there will be a greater motivation within the peloton to send riders up the road.

The reason for this is that as I have mentioned above, there is no clear-cut outcome for this stage so it will take a lot of resources from a team if they want to control it. Secondly, there are big enough GC gaps now to let riders get in the move and not be worried about the overall picture. QuickStep might even be happy to relinquish the jersey for a few days! With a few awkward stages to come and with one-eye on Blockhaus, I don’t think the GC guys will be overly fussed about keeping it together for a crazy final 20km, hoping to sprint for bonus seconds.

Therefore, I think the break has a good chance of making it all the way. We’ll see a move of around 10-12 riders go and that will be it for the day.

Like normal, I’ll throw a few names into the hat; some sensible-ish, some curveballs and hopefully at least get someone up the road!

The Willier rider has been very quiet this race so far, rolling home every day. That could be because he is conserving as much energy as possible and targeting a few stages, or he might just be ill. I’m obviously hoping it’s the former! Still without a pro win in his career, he is a solid climber who packs a good sprint so he should be able to handle this explosion finish. Firstly it is a question of making the break, but then who is there with him. He certainly has a chance of taking his first win in the correct company.

A strong rider who has taken two wins at the Giro in the past, he seems to be turning his hand to the sprints at this race. Nonetheless, he is much more adept at the short hills and tomorrow’s stage looks ideal for him. Exceptionally impressive at this race last year, working as the main lieutenant for Kruijswijk in the first couple of weeks, he looks back to that form again. I think he might be given the freedom to attack tomorrow before returning to team duties later in the race. He is a rider the others will be wary of if he makes the move.

The Austrian arrived here as Bora’s long-shot GC hope but he drifted way out of contention on Etna and finds himself over 10 minutes behind Jungels. Maybe he has caught whatever Bennett had the other day? If not, like a few others he could well just be conserving energy to attack some stages. Tomorrow looks like a good day for him as he is a strong all-rounder but packs a fast-punchy sprint which will suit him in good stead for the final rise to the line. His 7th on GC in Pais Vasco at the end of April is testament to his climbing ability as well! 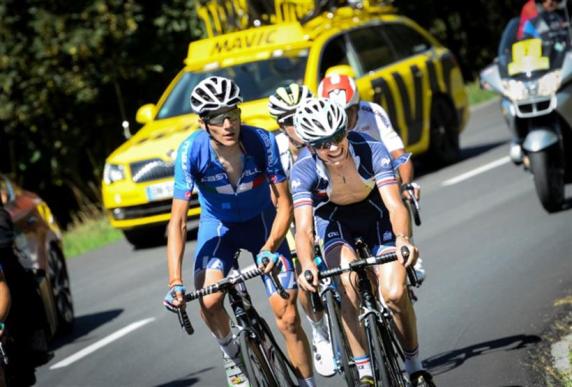 A promising young Italian climber, the UAE Emirates rider finished second at the Tour de l’Avenir last year. Not a big name in the peloton just now, he may benefit from that anonymity to surprise from the break!

I’ll go for a rider who seems to go well here to take the win. The finish looks great for him and he has a chance from both the break and if we get a bigger group come to the line. Battaglin to steal the day!

Thanks as always for reading! Who do you think will take the stage and how? Anyway,