We did end up with a break winner and it was the only rider left standing from the original move, Jan Polanc, who took a wonderful win, holding off the GC favourites.

Behind, Zakarin attacked and gained back some of the time he lost the other day coming home solo in second place, with Thomas winning the GC bunch sprint for 3rd.

That result leaves Jungels in pink with a whole host of other overall contenders not too far behind. Let’s have a look at what’s in store for the riders tomorrow.

The riders head south from Pedara before heading north and skirting past Etna, eventually heading along the coast towards Messina. 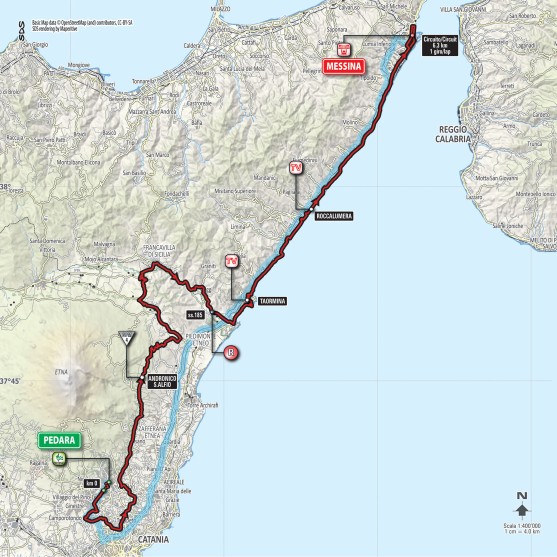 The first half of the stage is what I would call “rolling”, with a lot of uncategorised climbs out on the route but nothing too severe. In fact, we only have one Cat-4 climb to reward the breakaway with KOM points.

There is roughly 2500m of elevation gain throughout the stage and most of that comes in the first 100km; deceptively tough! However, the rest of the stage is almost pan-flat for the remaining 60km as the road hugs the Sicilian coast line so the sprint teams will hope to use that to pull back any break.

When we enter Messina itself, the riders will face a local circuit that they’ll complete 1 full lap of, but join the circuit with roughly 2/3rds left for a first “lap”.

As you can see it is a fairly technical finish with a few 90-degree turns littered throughout the circuit. However, the only real challenge towards the end is the roundabout they have to do a 180º turn on at roughly 1.7km to go.

It *should* be a fairly straightforward sprint for the peloton…

With the rolling parcours in the first half of the race some of the sprinters teams might not be too keen to control the stage from the off and instead chance it until they get to the flat coastal section.

Jungels being in the Maglia Rosa has really thrown a spanner into the works regarding my thinking for this stage though. If let’s say for example Thomas was in Pink, Sky don’t have a designated sprinter so as long as there is no GC threat then they would be happy to let the break go. Quick Step obviously do have a sprinter in the form of Gaviria so they’ll be more likely to pull hard over the opening part of the stage to keep the break in check.

Once onto the flat section we might get representatives from the other sprint teams, namely Lotto and Orica, coming to help with the pace making and bring it all back.

I mean it should be a sprint after all of that, and if you were to only look at the profile then it would seem nailed on. Yet, at the Giro nothing ever seems to be nailed on 100%.

We often see expected sprint days turn into breakaway wins at the Giro as teams don’t co-operate 100% behind to bring the race back and tomorrow does have that sort of feel about it. With a lot of climbing today, some of the riders might be wanting an easier day in the saddle tomorrow.

It looks set to be another sunny day in Sardinia but that’s not what interests me! Sounding very much like a broken record here, it is the wind and its direction that I care for most.

The above image is for Ali Terme which is roughly 45km from the finish line. As you can see, there is a reasonably moderate wind coming from the South/South-SouthEast which looks to be fairly consistent throughout the afternoon. Consequently, the riders will have a cross-tail wind for the majority of the flat run in to the line. Admittedly, it’s not as strong as the wind we had towards the end of stage 3 but it can still cause some damage.

The road to Messina from Ali Terme looks like this for the majority of the way. Sea to the right, or cliffs to the left. There is no real room to hide from the wind at all, especially on the relatively narrow roads.

I think we could see some splits on the run in tomorrow and unfortunately they might be caused by crashes due to the nervous and fast racing.

With that in mind, the break should be brought back but then it is just a case of whether or not we do get the splits and if we do; who makes them.

If it is a full bunch sprint, going off of form it looks to be a battle between Greipel / Ewan / Gaviria.

Greipel made the front echelon on Stage 3 before an unfortunate collision took him out of contention. He seems in great form and will want to make amends tomorrow.

Gaviria obviously won that stage and you would expect him to be challenging again, especially when you consider how strong Quick Step are in crosswinds. Nonetheless, he is still young and if he is not being shepherded at all times, I fear he may miss out if there is a split due to that inexperience. QS may then look to Richeze as a possible option.

Ewan will be bitterly disappointed coming away from Sicily empty-handed. He was dominant in the sprint for second on stage 1 and who knows how we would have fared on stage 2 had he not had the mechanical. He made the second group on stage 3 and will hope to make any splits this time. However, like Gaviria I think his inexperience might get the better of him.

Away from those three, Nizzolo looks the best sprinter on a flat day and he rode well for 3rd place on stage 3. He seems to be growing into this race.

After talking him up pre-race, Modolo has disappointed so far but I would expect him to go better tomorrow. Or I at least hope so, he needs to do something!

If it does get crazy then we could have a few groups on the road before we do get into Messina but the likelihood is we get some kind of sprint, unless it gets ridiculous which even I can’t see it being.

Look to second sprint options from teams, such as Hofland and Mezgec for example.

One rider I am interested in is Filippo Pozzato. The Italian veteran has been very quiet this race so far, saving energy with targeted stages in mind. Now, I’m not saying that tomorrow will be one of those targeted days, it is more a case that his young compatriot Mareczko has been pretty disappointing so far this race and I can’t see him turning that around tomorrow. If we do get some splits tomorrow, Pozzato may well be given the chance to go for the sprint. He’s not a spring chicken anymore, but he’s still no slouch and could be up there if he’s lucky!

We’ll get a sprint of some description at the end of the day and Greipel will make amends for what happened on stage 3, making his experience count and taking his second stage of the race! 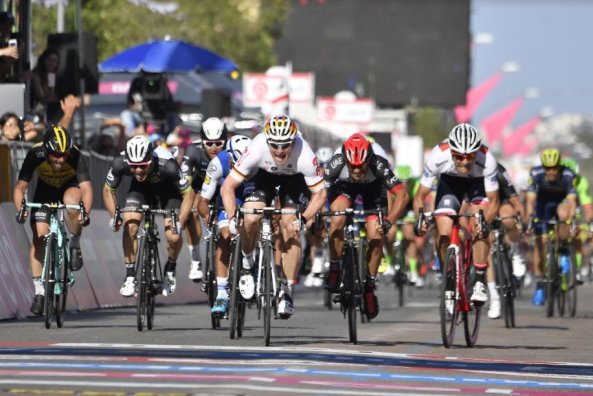 Watch out for a wily Italian though if things get choppy out there!

Thanks as always for reading! Who do you think will win the stage tomorrow? Anyway,