A wet and miserable TT rewarded the risk takers of the peloton. In the end it was Fabio Felline who took a great win. He was putting down a serious amount of power in the closing straight, with the back wheel sliding all over the road. Possible flat tyre? Impressive either way!

Alex Dowsett was the last rider down the ramp but kept things interesting, only losing by 2 seconds to the Italian, with an impressive ride from youngster Alexander Edmondson to take third.

As for Albasini, he looked to be going okay on the first part of the course, but seemed to lack the confidence in the second half. Probably didn’t want to fall after knowing I had put the curse on him. Oh well!

The GC guys took as few risks as possible, trying to keep themselves upright going into the rest of the week. Let’s have a look at what’s in store for them tomorrow.

We get the first open road stage of the race on day two and we are already treated to what is arguably the Queen Stage. Although I do think that is still going to be stage 4!

An interactive profile can be viewed here.

With only 2700m of elevation gain, it’s certainly not the most wearing day, but the vast majority of the climbing does come in two big sections.

First, we have the Cat-2 climb of Vex that starts around the halfway point in the stage. Averaging a solid 6.3% for 8.9km it will tire the peloton for what’s to come later but I can’t really see it having any impact on the race. If anything, the descent might have a bigger say in the outcome if it is wet and dangerous.

Following the descent there is a long 40km period of flat before a little 2.1km long, 9.1% average kicker. This could see some of the deadwood dropped from the peloton if a team turns the pace on here. If not, the bunch will be grouped together as they start the final climb of the day.

According to the guys @LasterketaBurua the climb is 14.5km long and averages 4.2%, but that’s it topping out with just over 1km to the finish line.

As we get nothing in the road book at all about the climb I’ve made a Strava profile for the whole thing. View that here.

Interestingly, the rider who holds the Strava record for the climb is Adrien Costa (30 minutes) who set that back in the junior race of Pays Vaud back in 2015. I’m sure that will fall tomorrow! 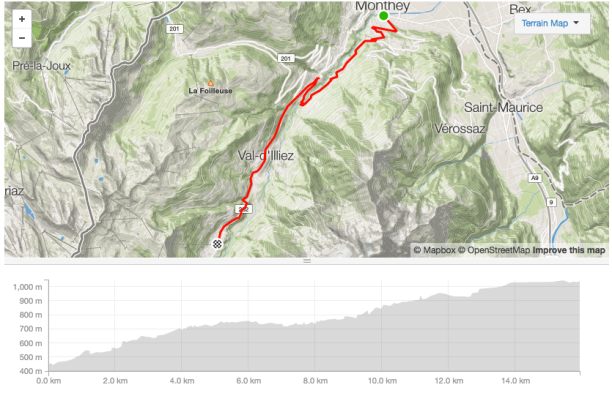 You can split the climb into three parts, with some false flat and shallow descending in between.

The first section is 5.5km at 5.4% but this does include some double figure ramps. Three km of said false flat/descending follows before the second section; 3.2km at 5.8%. We then have almost a kilometre of descending before the final kick up which is 1.3km at 7.7%. A flat-ish run to the line then follows.

Will we see a solo winner, or a group of GC favourites come to the line?

Looks set to be another grim day for the peloton, a recurring theme this week!

Thankfully it’s supposedly only raining at the finish line tomorrow in Champéry (above forecast), but the riders will certainly be cold and wet either way. Hopefully the organisers won’t need to change the route!

The same can’t be said for the climb of Vex as there is a good chance we’ll have sleet on it and that could make the descent dangerous. I don’t think it will have a massive impact on the day if it is included or not.

It will all come down to the final climb and how aggressively the riders approach it. With only one other mountain top finish, I’m sure the better climbers will want to put as much time into their competitors with a long TT looming.

The weather will play as big a part as any with some riders feeling the cold more than others, and potentially underperforming.

However, I just don’t think the final climb is hard enough to create some serious time gaps. The toughest section is the 1.3km (@7.7%) segment that comes near the end of the climb. We could see some strong attacks here from the likes of Porte and Froome but will they really distance everyone on it? I’m not so sure.

The flat run in to the line could scarper any moves that were made on the slopes, but of course it could work conversely where those behind don’t work together.

Ultimately though, I think the stage will be won either from a late attack on the flat closing 1.5km or in a sprint between GC favourites.

So I’ll throw some names into the proverbial hat.

A man ahead of the times in bad weather…

But no, in all seriousness Pantano has all the credentials and abilities to go well tomorrow. He’s been climbing strongly in support of Contador all season but now has his own chance to chase a result. Or does he? There is a chance of him riding for race leader Felline, but I think Trek are best to keep their options open. Packing a fast sprint, he can certainly win the stage from a reduced group. 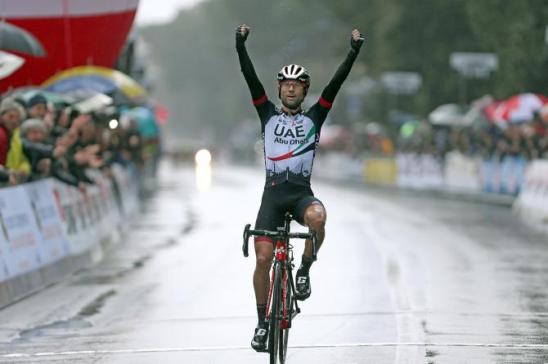 The climb is possibly just on the limit for the Italian, considering the length of it, but with its relatively shallow gradients he could hang on. Not afraid to attack or hold out for the sprint in that situation, it will be interesting to see how he plays it if he’s still there!

Going to the Giro in support of Dumoulin, Kelderman hasn’t had many race days so far this year, only 11 in fact! Two of those were at the Ardennes and he’s slowly regained his race speed and form. He put in a fairly solid TT today and will want to test himself at some point in the mountains. Tomorrow could be as good a day as any!

I’ll go for Mary Poppins himself, Jarlinson Pantano to take the win! We’ll see an attack on the final ramp by some of the favourites and Pantano will mark it out, with Felline behind. The Colombian will then win the ensuing sprint. Valverde’s not here to beat him this time!

Thanks as always for reading and any feedback is greatly appreciated. I hope we get an unaltered stage and an exciting days worth of racing! Anyway,