The “festival of sprinting” returns again this year and once again we have a whole host of fast men on the start line.

We had horrible conditions last year, with rain pounding the peloton almost all afternoon. Nonetheless, the sprinters weren’t deterred and we ended with the traditional bunch sprint, although only 28 riders finished within 10 seconds of Kittel.

More of the same this year?

The organisers have decided to honour Tom Boonen in his last Belgian race of his career, changing the traditional route, and starting the day in his hometown of Mol. They’ll do a local lap there before heading west towards Antwerp (Schoten). 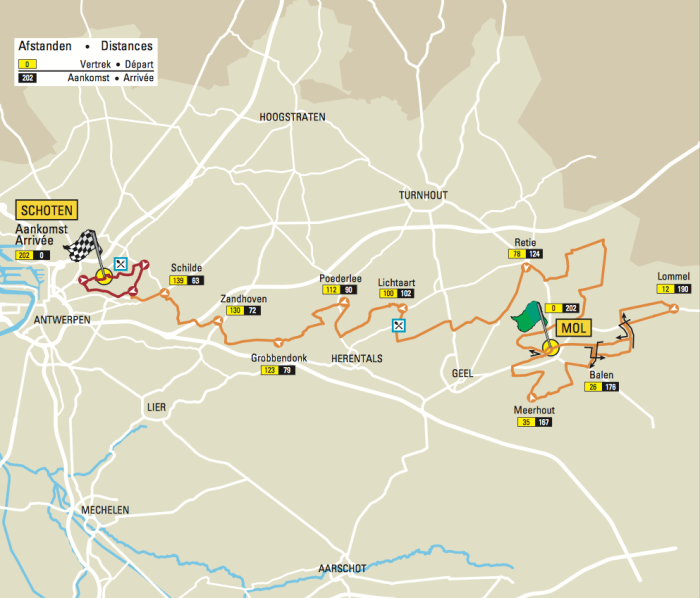 Parcours wise the race is pretty much pan-flat, but what else would you expect in a race that’s often dubbed as the unofficial sprinter’s world championship.

Once we reach Schoten, the riders will complete laps of the same closing circuit that we’ve had for the past few years. This does feature 1.7km of cobbles but compared to what we’ll witness on Sunday in Roubaix, they should be of no real influence in the race unless they cause an untimely puncture.

Positioning at the end of the race will be important due to the two 90-degree turns at 1.1km and 700m to go. We saw last year Quick Step lead through this part of the course with two riders in front of Kittel and he was dropped off perfectly at around 200-150m to go.

It’s also important to be at the head of the peloton so that you can take the shorter inside line through the sweeping bend at the finish line, rather than have to go around the rider in front.

The wind didn’t have much of an impact on the race last year but it was the rain which turned the day into one of attrition.

I’m sure the riders will be happy to know that it looks to be a dry edition this year. However, I’m intrigued to see if the wind has a bigger part to play with the changed route. I say this as the riders will be travelling in mainly the same direction (west) for the majority of the day before they reach Schoten.

The constant 20km/h NW wind looks ideal to split the race up on some of the more exposed sections, as it will be a cross or cross-head wind for the peloton. Unfortunately for us the viewers, the riders won’t be traversing anything like De Moeren, and the road isn’t as exposed as I was hoping for! Nonetheless, there are some sections where there is no tree cover and open fields so fingers crossed for some splits. It all comes down to how aggressively the teams ride the course though, they can make it tough enough for echelons or ride at a more conservative pace and keep everything together.

Ultimately though, the race should come down to a sprint, barring something crazy happening, it’s just a case of how big the peloton will be. Most of the sprinters tend to be good in windy conditions so they should make the splits if we do get any echelon action!

Marcel Kittel will start as the big favourite. Last year’s winner and most successful rider in the history of the race, the German looked very good at the back-end of De Panne. His win in the sprint (stage 3A) after coming from far back was truly exceptional, and the performance in the TT wasn’t bad either. He’s the rider to beat! (Unless of course they decide to work for Boonen but that is very, very unlikely.)

Aside from the fantastically haired German, there are a lot of sprinters here looking to take his crown if he falters. Although notable in his absence is Mark Cavendish.

Andre Greipel, on paper at least, looks best of the rest. The Gorilla as he is affectionately known, was just putting in the training miles in Flanders on Sunday…He made his usual daredevil attack but was eventually brought back to heel. Nonetheless he managed to bag a top 20 and arrives here in good form. More importantly for him, he arrives with an almost full strength lead-out train that can challenge the likes of Quick Step.

Smarting after his crash in Flanders, Peter Sagan may well want to have a hit out here before going on to Roubaix this Sunday. If he does, then he is fast enough to challenge after a tough day. Yet, he sometimes goes missing in this type of race, so Bora may turn to Matteo Pelucchi instead. Although, if Sagan sometimes goes missing, Pelucchi never turns up to start off with! A team to avoid backing with any sort of confidence.

One rider who is always confident in his abilities is Nacer Bouhanni. The Frenchman had a disappointing Paris Nice and had to drop out due to illness, but since then he’s looked good. People seem to forget how fast he is at times and is certainly a rider not to give an inch to because he will certainly take a mile!

Edward Theuns has performed consistently well here on his first two appearances, placing 2nd and 4th. He arrives with the full backing of his team and they have a strong lead-out train to support him. On stage 2 of De Panne he looked fast, but appeared to struggle in stage 3A when he looked to be very well positioned. Maybe it was a case of hesitancy? Or he just didn’t have the legs and is tired after his classics campaign? We’ll have to wait and see but I’ll certainly be watching with interest. A top 3 result would not surprise me!

Dylan Groenwegen arrives after a fairly poor race in Limburg and he’ll be hoping to go much better tomorrow. He started the year off very strongly but is without a win yet this season which might dent his confidence a bit. Nonetheless, he is very talented in a tough race and if the wind blows you would expect him to make the split. In a tired peloton, he is a danger for the win. Like Bouhanni, he is fearless and will go for any gap if you give him half a chance!

Demare has a chance but he’s went off the boil since his barnstorming start to the year.

Bonifazio goes well when you least expect it, and I expect him to go poorly tomorrow. Top 5 result incoming!

Viviani is similar, he has been poor this year but might pop up with a top 5 if he follows the right wheel.

Planckaert, Jans and McLay will be in or around the top 10.

I expect there to be a small-ish peloton fighting it out for the win again come tomorrow afternoon. Whether that be through the race breaking up due to the wind out on course, or just becoming disengaged and disinterested in the final lap of the race.

Kittel is the favourite and should win, but keep an eye out for a flying Frenchman too!

No value in Kittel and almost tempted with the odds on Sagan, but…;

Bouhanni 1pt EW @8/1 with Bet365. (Wouldn’t take much lower, but you might get a better price from elsewhere later on, I’m just in a rush to get this published.)

Thanks as always for reading! Who do you think will win? Will the wind play any part in the race? My Pais Vasco stage 3 preview will be out soon as well so keep an eye out for that. Anyway,