*Apologies, the late run time of today’s stage and the fact I need to have a snooze before work this evening means that both previews will be a lot shorter than normal.*

Quintana is just too good. Easy for the little Colombian in the end! 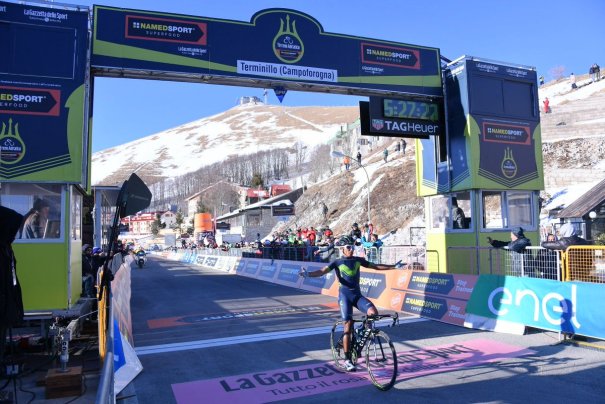 Thomas did very well to come second and has an outside chance at sneaking onto the podium at the end of the race now. Yates managed to take third on the stage which moves him up to second on GC.

Will we see some movement tomorrow? Let’s have a look at what’s in store for the riders.

Arguably a harder stage than the one we had today, mainly due to the relentless up and down nature of the route and is the stage I’ve been looking forward to most all week. Better not be a dud now! 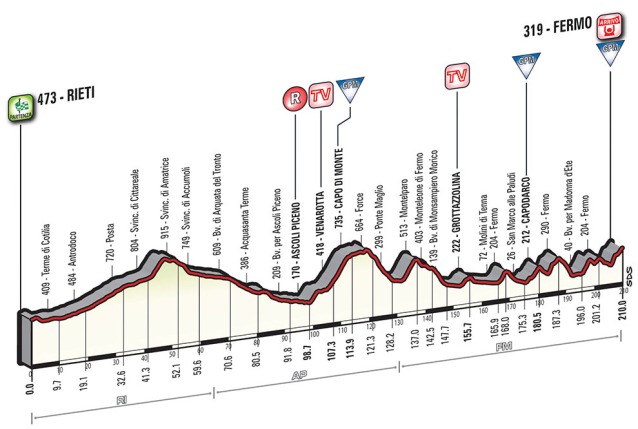 Essentially the riders are either climbing or descending all day, it won’t be a relaxing day in the saddle.

I love the way this route is described in the road book – the “wall climbing stage”. If I’m being honest, I’m having difficulty locating profiles/climb lengths/gradients for some of the earlier climbs, so we’ll start off with the Capodarco at 30km to go. Although saying that, the first passage into Fermo (at 204m of altitude) is detailed in the second profile below. 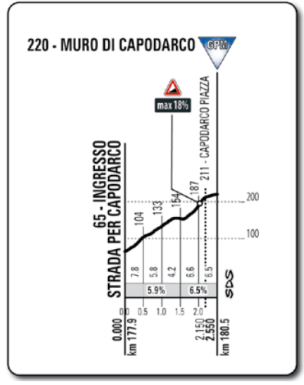 2.5km long, it averages just a tad over 6% in gradient but pitches up to 18% at 400m to go. From there, we have a quick descent before the road heads upwards again, to near the finish line (I think?!).

Another fast descent follows before the riders reach the penultimate climb, well, climbs of the day. 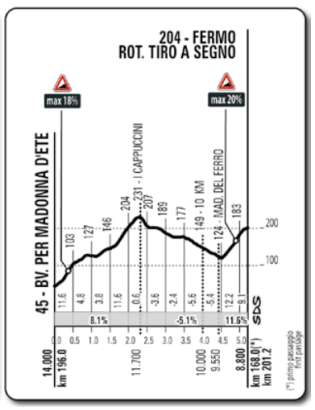 The first part that tops out at I Capuccini averages 8.1% for 2.3km, but has ramps of 18% in places. There won’t be much time for recovery as the riders descend for 2kms before a 750 section at 11%.  They’ll have already climbed this part, but they might be too tired to remember!

Roughly 4kms of descent follows before the road rises once again, but this time towards the finish, and oh boy, does it rise quickly. 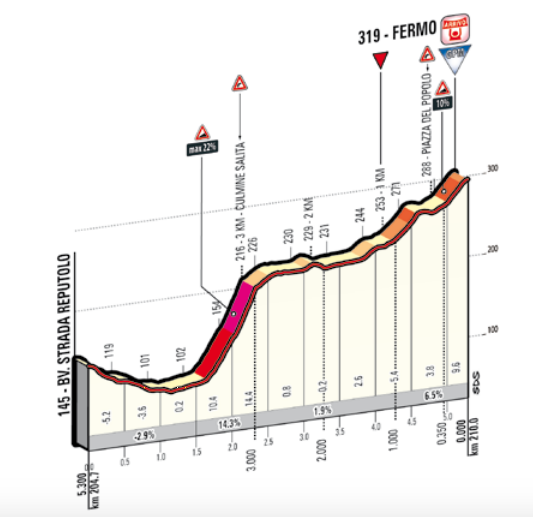 The face an 800m wall that averages 14.3% to get things started. They then have some respite, well, a (roughly) 2km long section that averages 1.9%, before the road kicks up again in steps to the finish line, averaging 6.5% for the last kilometre. However, the riders will need to keep something left in the tank as the final 400m is 9.6% and you could easily be reduced to a crawl here.

This has everything in store to be a truly incredible day of bike racing!

Pffft, your guess is as good as mine!

However, with the gaps still being close on the overall classification, I think we’ll see some kind of GC action tomorrow.

Again, apologies for this being shorter but I don’t have the time to do my regular elongated posts of drivel! So just like Paris Nice, I’ll give one name.

The Sky rider was exceptional today and has a real chance of finishing upon the podium. His confidence will certainly be buoyed! He’s a great one-day racer and this type of parcours looks good for him, although maybe a little bit too steep in some parts. Being further down on GC, still, he may be given some leeway as the Movistar riders mark those closer to Quintana. I simply cannot ignore the Welshman’s form anymore! 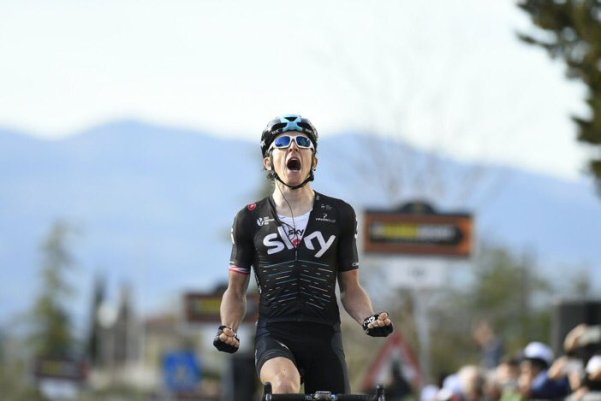 Thomas too short for my liking. I thought this other rider would have been shorter, and he should cope with the climbs well enough. Not a GC threat etc…

Apologies again for the briefness of this one, but as always thanks for reading! Hopefully normal service should be resumed tomorrow. Anyway,