A hectic finish that was tough but maybe not as tough as I imagined. I have to apologise as I thought it was a slightly different finish to that of last year but it was exactly the same, doing too many previews for my own good! Or that’s my excuse anyway. 😉

Anyway, it was Peter Sagan who took a dominate sprint win, ahead of Viviani and Debuscherre. 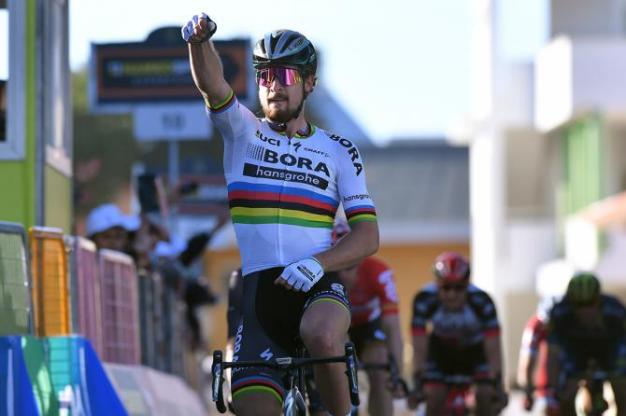 It was a really, really weird top 10 as a crash behind took out or at least severely hindered some of the favourites for the day.

Nonetheless, let’s have a look ahead at what the riders can expect tomorrow.

A tough GC day and an ascent of the famous Terminillo. 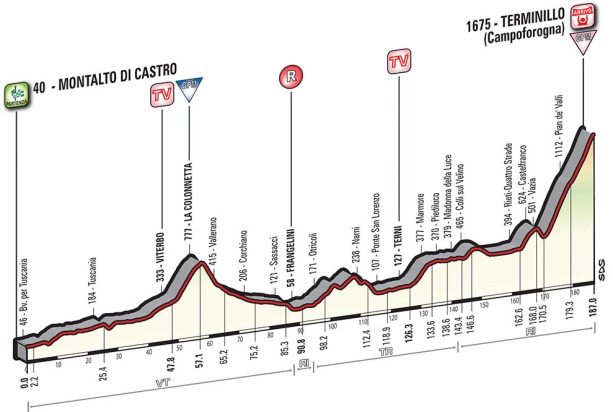 The opening part of the stage really acts as a prelude, this is all about the final climb.

It’s a very similar climb to the one we’ll see in Paris Nice but is made harder in my opinion by the irregularity of it. Most of the climb is close to 8%, but there are a few kilometres that are roughly 4% and this lowers the average gradient quite a bit. The top of the climb does “flatten out” so if riders arrive together we might see some kind of sprint, but I can’t see that happening.

Oh boy, looks a bit nippy out there!

That real feel of -5°C looks like a real killer. Especially when you consider the strong winds forecast and the finish tomorrow looks horrible. The wind will more than likely be a cross-head for most of the climb so it might nullify some of the attacking we could see, which would be a real shame. Conversely though, once you lose the wheel it will be hard to get back on!

There is a chance we could see the breakaway go all the way. This will only happen if the riders in the peloton are fearful of what might happen on the Terminillo and they don’t want to chase all day.

However, I do think we will see some type of GC battle on the Terminillo. There in theory should be enough firepower and motivation behind to close down the break and set up the overall contenders to battle it out for bonus seconds and more!

Nairo Quintana has to start as the clear favourite. After being marked out of the competition in Abu Dhabi he’ll be here to exact revenge. Movistar brought a crack TTT squad with them to put him in the best possible GC position going into this stage and they’ll expect him to deliver. He won a truly epic stage in the snow at this race back in 2015 and a repeat of that feat is more than on the cards!

Who can challenge him?

Honestly, no one in my opinion. Everyone else will more than likely be fighting for second place unless there is some crazy tactical battle or Nairo pops.

Geraint Thomas looked very strong on his way to the win on stage 2. This climb is a completely different beast but given his immediate lack of a GC threat he is a rider who could squirrel away from the bunch. As I said in my overall preview for this race, I think he’s going very well at the moment and is a genuine threat for a podium in the Giro. A good result tomorrow would go a long way to solidifying that thought. 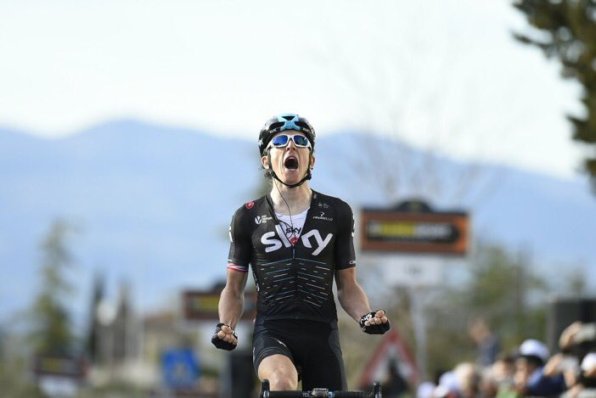 Of course, his Team Sky team-mates Landa or Rosa may also profit from the awful TTT and be given some freedom. They both have the abilities to do well here and are naturally better climbers than Thomas. If one of them manages to get a 30 second gap on Terminillo they could be tough to bring back.

Thibaut Pinot, much like his wine namesake, prefers the temperature cooler. He often seems to struggle when things get toasty, so a day in the cold, wet break of Strade Bianche will have set him up nicely for this stage. He is clearly going well in this early part of the season. Anyone who beat Contador in Valenciana is going strongly!

Vincenzo Nibali normally copes well in awful conditions but his own personal condition is a bit unknown. He’s gone better at the start of this year than he has done in the past, but does that mean that he is capable of finishing on the podium here?

BMC will be looking to hold onto the GC lead with Tejay Van Garderen but it will be tough. The American had a difficult Abu Dhabi, struggling with illness, but has arrived here as their GC leader. He seems to struggle in poor conditions at times and I fear that may be the same outcome for him tomorrow.

The rider who finished second to Quintana in 2015 on this stage is here again. Bauke Mollema will have been disappointed with his team’s TTT but a good performance here puts him back in contention for the overall podium. He’s a real slogger, so to say, and will certainly give it his all.

Tom Dumoulin appears to have started this season in great form and I’m sure he’ll be up there again tomorrow but it’s just the length of the climb that worries me with him.

Fabio Aru has been relatively attentive at the front of the bunch in the past two finishes, not wanting to lose any time in splits. He’s started his season solidly with a third and eighth GC placings in his first two stage races. His time trial on the final stage will most certainly let him down, so he needs to make the most of his good climbing legs tomorrow, if he has them!

Adam Yates will want to try to replicate what his brother managed today in Paris Nice. Finishing 7th in 2015, two years stronger now and a 4th place finisher at the Tour, he certainly has a chance of getting a better result this time round. His win in Industria last Sunday certainly was very impressive!

Rui Costa is the form rider of the season so far, but I think a good result here will be a step too far. Yet again though, after a poor TTT like many others, he has a chance of being gifted a bit of freedom.

Rafal Majka is another who could be gifted some freedom. The Polish rider is one of the more under-appreciated climbers in the peloton and this long slog looks as if it will suit him!

The GC field in this edition is a lot stronger than when Quintana last won here in 2015. However, barring some kind of miracle I feel we might get the same result. Do I believe in miracles? No, but I do believe in outsiders and crazy things happening! Team Sky to profit from having three strong guys but not considered GC threats, yet. I’ll give Rosa another chance! 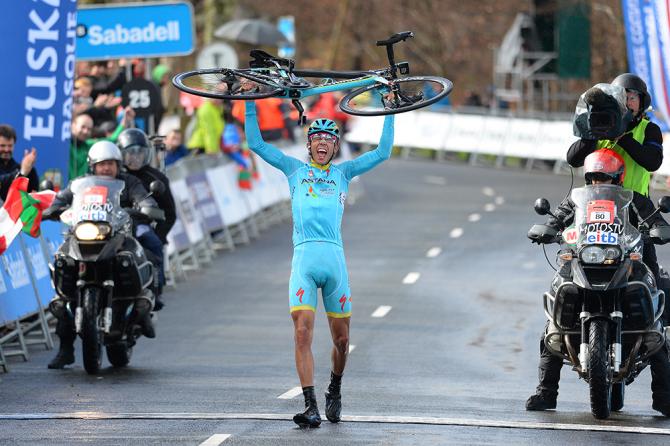 Or Quintana just wins by 30 seconds…

You might get better as more places price up later on but I don’t have the time to be waiting around!

Thanks for reading and any feedback is greatly appreciated! Who do you think will win? Can anyone stop Nairo? Anyway,