Rain and wind tore the peloton apart and we had several groups all over the road. In the end, it was Arnaud Démare who won a two-up sprint against Alaphilippe, after the latter attacked on the final climb of the day, with only Démare able to follow. 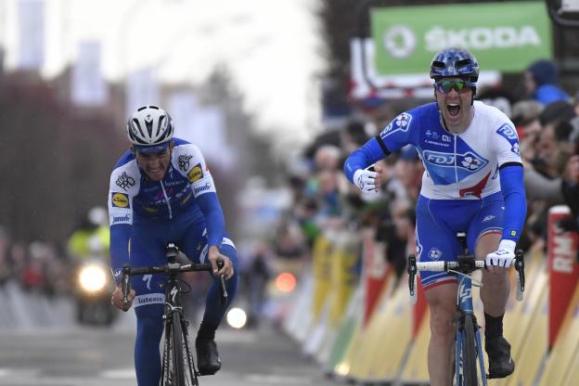 A slightly annoying day as I had the race pretty much perfectly planned out; with it being split up in the wind; GC gaps; and a late attack succeeding. Just a shame I didn’t have the correct riders! Although I guess 2 out of the top 3 were sprinters so it would have taken something special to have the winner.

GC wise, there are some fairly large gaps now but nothing too drastic and the race is still very much on. It should certainly ensure some attacking racing for the rest of the week.

The dullest stage of the week parcours wise and one that in theory should be a nailed on sprint. 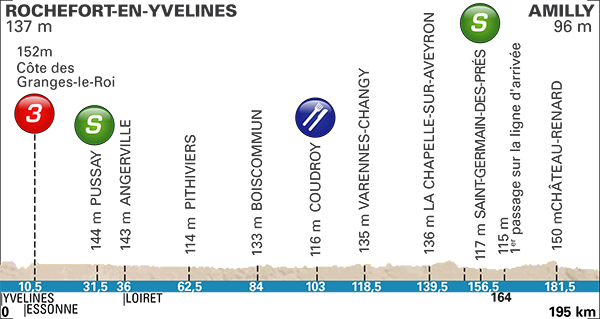 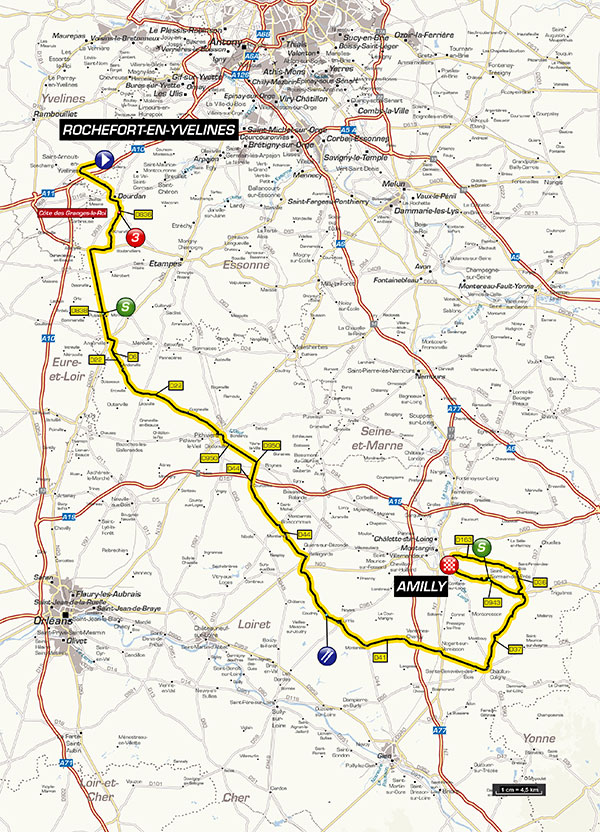 The run in to the line is fairly simple with no real obstacles to deal with in the final kilometres, just a few seeping bends. 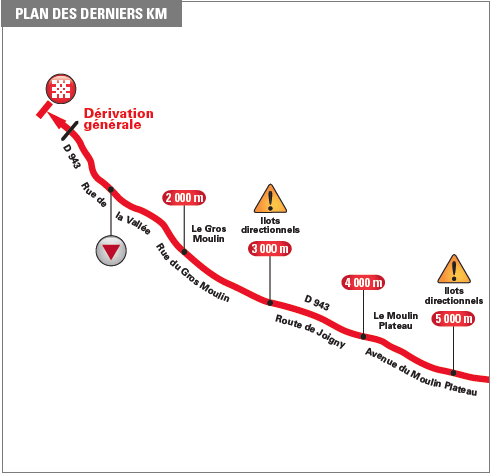 It’s practically pan-flat too, so once again the only thing that may stop a bunch sprint is some inclement weather.

Another miserable day in store for the peloton and it could be a long day in the saddle for them too. The reason I say that is because it looks as if we’ll get a cross-headwind for the first half of the day.

However, as the day progresses the wind swirls around and there is a good chance we’ll get some strong crosswinds at points. Will the bunch split in them? Quite possibly. As we saw today, a nervous bunch means crashes and splits.

The section from Châtillon-Coligny to the final circuit looks particularly exposed and the road travels in the correct direction for some echelon action.

If a team really wants to split it here I think they can. Everyone will know that so the fight for position itself will be incredibly intense which in turn will cause nervousness and the possibility of crashes that I mentioned above. It only takes one person who’s on the limit to pop for a gap to be formed.

We will get a sprint of some sort in Amilly. Heck, even the peloton might regroup on the final circuit but there will certainly be some tired bodies out there!

You could argue that those who made the front selection today are the strongest sprinters here, and to be honest, you would pretty much be correct.

Today’s winner Démare looks in splendid form, something that I’ve said for a few weeks now but he typically goes on to win when I’ve not backed him. He’s an excellent rider in bad conditions and should make any split we have tomorrow. His lead-out train is good, not great, but good and in Guarnieri he has a very capable last man. Full of confidence, he’ll fancy his chances of doubling up.

Kittel went pop on the final climb today but that was expected. He did well to make it into the front group and will be hoping for more of the same tomorrow. Easily the fastest flat-sprinter in the world right now, he’ll relish the easier run in. Can he put on another dominant display? 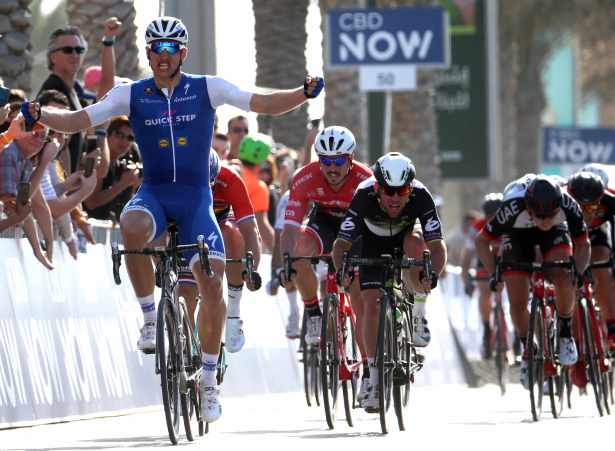 I was very impressed with the selfless work that Greipel did today at the front of the bunch. He put in a great shift and some massive turns for Gallopin and will hope that the favour will be returned tomorrow. Not with his normal lead-out, the Gorilla will have to surf some wheels but he certainly seems in good shape at the moment and I rate his chances.

Kristoff won the bunch gallop for 3rd today. Would he have beaten Démare? Who knows! Personally, I don’t think he would have as although he has 4 wins to his names so far this year; 3 of them have been against second-rate sprint opposition in Oman. He’s yet to test himself fully against the proper fast men of the peloton. I’m not fully discounting him as he is a classy bike rider, but I don’t think he’ll win tomorrow.

One rider who will be bitterly disappointed after today’s performance will be Nacer Bouhanni. The Frenchman was one of the first riders dropped in the crosswinds and that was his day well and truly over. He’ll need to turn that around drastically tomorrow if he wants to be in contention.

Groenewegen had such a non-existent day that I completely forgot about him until having a quick look at the odds for tomorrow. He’s another who could get involved tomorrow but not for me.

Away from the “bigger” names of the sprinting peloton there are two riders I would like to highlight.

Magnus Cort Nielsen is fast becoming one of the most promising tough sprinters in the peloton. The Orica rider was in the second group on the road today, doing a lot of work for the team’s GC leader. With Yates having lost a reasonable amount of time, I think the Dane will be given the opportunity to ride for himself tomorrow, even if Yates does get caught behind in a split. A very fast finisher after a tough day in the saddle, he is one to keep an eye on. 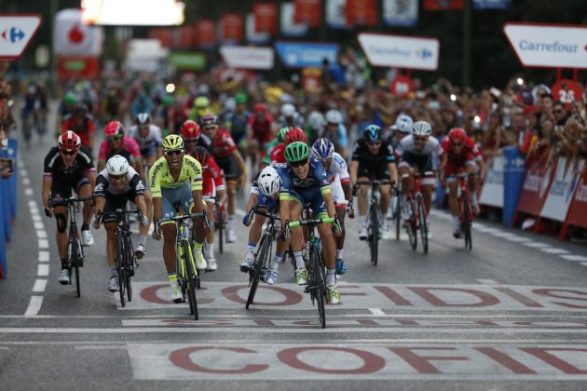 The other is Sam Bennett. Like Cort, the Irishman was in the second group for the majority of the day but with a lack of team support his options were limited. Normally a very good rider in bad conditions, he’ll be hoping to make the first split tomorrow. Certainly not a rider to be discounted, he is criminally underrated from a reduced bunch sprint in my opinion.

I was impressed by not only the work he did today, but also his closing speed in the final stage of Abu Dhabi. I think Greipel is on superb form but is masking it quite well just now. He should make any split and without there being any GC springboard at the end of the race he should be sprinting out for the win! 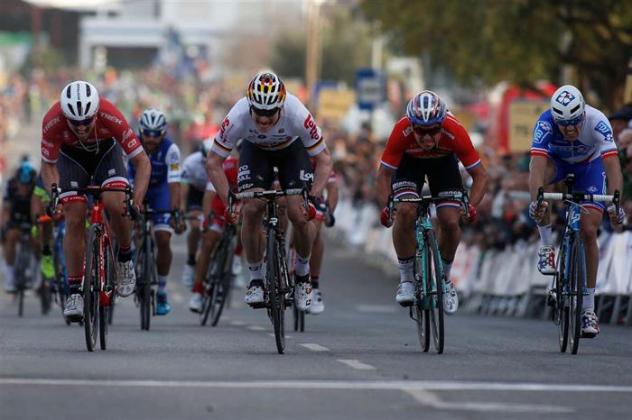 Thanks for reading as always! Do you think the race will be blown to bits again tomorrow? Or will we see a full peloton sprinting it out? Anyway,