In stark comparison to yesterday’s break, the move today was incredibly strong. Movistar were typical Movistar and didn’t bother to chase, even though escapee and eventual stage winner De La Cruz was only 2’36 down.

Some will berate them, but it’s a great tactical move in my opinion. It means that their team gets another day of “rest”, yet they’re still very much in control of this Vuelta. Letting other teams have the jersey and making friends is in the interest of Movistar for later on in the race.

Anyway, let’s have a look at tomorrow’s stage.

After the past couple of stages, you’d think that it couldn’t get much harder…

But alas, we have the most amount of climbing metres so far on stage 10!

A whole host of small un-categorised lumps punctuate the first 140km of the stage. However, this is all a pre-amble for before the closing 50km, where we have a first cat climb that whets the appetite before our first Especial Climb.

No Strava profile today, as the road book is good enough!

As you can see, the Cat-1 is relatively short (6.2km) but it is tough! The average gradient (7.8%) is deceptive. Taking away the slight lump at the start, a more realistic representation of the climb is 4.7km at 10.1%. Now that’s a test! The climb itself is too far out for any GC damage, unless Contador wants to try one of his traditional long-range attacks. Instead, it will probably see the break split up, with only the strong riders cresting together. They’ll have to go over the top together, there is a long 15km or so flat section before the start of the final climb.

What a climb! You have to feel sorry for the riders at times; 12.2km with a 7.2% average gradient and 17.5% max kicker. Again, that average gradient is slightly lowered because there are a couple of false flats and shallow descents, so when they’re climbing it’s closer to an 8.5% gradient. The defining feature of the climb (aside from it being tough), is that it’s gradients are incredibly inconsistent. This makes finding a rhythm difficult and definitely suits some riders more than others. The last time this finish was used was back in 2014, when Niemiec just held on from the days breakaway to take the win.

Like normal we’re left with the age-old question of: break or no-break?

With the rest day on Tuesday, some of the GC teams may fancy their chances at controlling the break and going for a stage win. I think it’s clear from today’s performance that Movistar aren’t overly concerned with chasing for a stage win, not yet anyway, so that’s them out!

Therefore, it’s over to Tinkoff (Contador) and Sky (Froome). The former doesn’t have a very strong team in the mountains, but they do have strong rouleurs who could ride tempo on the opening part of tomorrow’s stage. Froome looked a bit tired at the end of stage 8 but looked OK today. Then again, there wasn’t much of a pace from the GC teams up the final climb, so he might not be confident of performing when the race is on.

So it’s over to Etixx to control the day and the break. They’re the type of team who will honour the jersey and chase if there is someone dangerous up the road. However, if they don’t get help from other teams then it will be a very long day for them! They’ll be hoping no-one in the top 20 goes on the attack.

You know the drill by now, I’ll name 3 riders.

Willing to give the American another chance. Same reasons as yesterday’s preview; fighting for contract and has been climbing well in the GC group the past few stages. He’s also far enough down to be let go.

Molard likewise gets another chance. He’s close-ish on GC, but at 5’06 down he should be given the all clear by Etixx. He’s been climbing very well with the GC guys as of late and should not be discredited.

Without a GC rider, Katusha have to be attacking. They missed the break today so I expect them to be in it tomorrow. Machado himself was on the move earlier in the race, but that turned out to be a futile move. A strong climber on his day, he’s been rolling home the past few days. Possibly saving energy for tomorrow?

Apologies this section is slightly shorter than normal, it’s just disheartening having to write about a potential break everyday!

I expect there to be a few fireworks behind in the GC group. Movistar/Sky/Tinkoff will all probably try to come to the front and ride tempo for their respective leaders. With it being a long and demanding climb, only the best will be left again and numbers will be key. Quintana will hope that Valverde can stay with them for as long as possible, the same goes for Froome with Konig. Contador unfortunately will have to fly solo, but he’s been used to that in this race.

I expect Valverde to attack at some point, hoping to draw the others out, meaning that Quintana can get an easier ride. Orica could possibly try something similar with Yates & Chaves.

If all three of the main GC guys are on form, it could be a great stage and this well could be the image we see throughout the Vuelta. 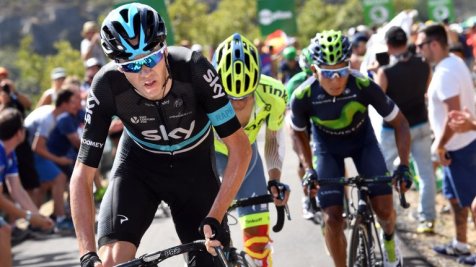 However, going off what we saw on Saturday and partly because I’m a big Quintana fan, I think the Colombian can put in a stinging attack tomorrow and dishearten his opponents. He looked so comfortable on the final climb on that day,with his jersey zipped all the way to the top, as the other contenders had theirs agape. He could possibly gain another 20-30 seconds on a very good day, and that would give him a very nice buffer going into the rest day!

The break stays away and Molard wins.

Behind we get some GC fireworks.

Even if you think it’s a GC day there’s no point backing them pre-stage, so another selection of raffle tickets for me:

As normal, hunt around for better prices later.

Thanks again for reading, how do you think the stage will pan out tomorrow? I hope it’s an exciting stage after today’s relatively damp squib. As usual, any feedback is greatly appreciated! Anyway,