That was messy, with Meersman taking a very reduced bunch sprint.

We saw the attacks off the front on that penultimate ramp that I expected, Gilbert to boot. Followed by several crashes as the road narrowed and there were a few suspect/unmarked bits of road furniture along the way. Not great from the organisation and UCI.

Goncalves was up there and was in a great position with around 700m to go. But as those in front slowed down (Gilbert stopped the lead-out), he was forced into the inside, right along the barriers. Unfortunately, he couldn’t get out after that and only managed 10th place. A bit of inexperience on his behalf. Oh well, on to tomorrow’s stage!

Much to the surprise of everyone, oh wait, maybe not, we have another stage with a lot of climbing metres. This is another classic “hilly” day at the Vuelta.

Like several of the stages that we’ve already had, the majority of the climbing comes in the second half of the day.

You know the drill by know, Strava profile of the final 75km viewable here.

Just over 2,000m worth of climbing in the final 75km, it won’t be an enjoyable experience for the heavier set riders!

The first climb is 4.1km long, averaging roughly 5.5%. Nothing to challenge the GC men, but it will test those who are trying to control the race.

Afterwards we start the drag up to “Castro Caldelas” (Strava segment here). This climb averages closer to 6% and goes on for much longer, at 9.5km. The toughest part may well be the plateau afterwards, especially if the pace is increased where those who are struggling will be put under pressure.

A long descent follows before the “Barxacova – miradoiro de Cabezoás”, 15.3km at close to 4% average (Strava segment here). Nothing overly challenging but the second half of the climb is the more difficult part (4.8km at 6.7%). This is where we’ll start to see some attacks from the breakaway.

The final obstacle on the course is the hardest. The rather aptly and ingeniously named segment Ou 0508 Climb (here) is 2.2km long, averaging 7.6%. With the toughest section of the climb coming within the final 400m (ramps of 15%), it’s a proper springboard for a late attacker. I say this as the descent will be fast and there isn’t much time for anyone to organise a chase. The road to the finish line itself rises ever so slightly at roughly 2%.

How will the race be won?

Teams aren’t strong enough or willing enough to put the effort in to bring the break back. The only way the break is brought back if there is a rider dangerous to Atapuma and Valverde really fancies his chances for the stage.

So it’s time to enter the Spanish Lottery!

Let’s narrow down the criteria;

And we’re left with approximately 80 breakaway candidates. Then there’s the fight of getting into the break. Although that should be left to the “climbers” tomorrow as the opening 10km are all up-hill.

It’s really a stab in the dark so like normal, I’ll name three guys who could go well.

The Spaniard always seems to get himself into breakaways that stick. He’s a solid climber who should be able to cope with the challenges we have tomorrow. One thing that is a deterrent is that he’s not really a winner, only 2 pro wins, but that could all change!

The American was ever-present throughout my Giro previews as a breakaway candidate. He is a real talent with a massive engine. Working well recently for Talansky in California, if he’s let off the leash then he could play a massive part in the outcome of tomorrow’s stage. 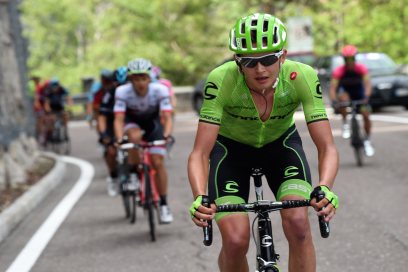 The Spaniard has had a pretty poor season so far this year by his standards. He had stomach problems at the start of the Vuelta but seems to be over them now. On his day, he is an exceptional climber, with a very attacking mindset. Great for the fans! Hopefully, he’s 100% fit and goes for it tomorrow.

Now for something slightly different…

Inspired by one of my friends who came out with this

when he was asking about how I go about my selection process for a breakaway. So I’ve decided to consult https://www.random.org/lists/ to come up with a rider for tomorrow’s stage. I’ve put in all riders names, and this is the random rider who topped the list…

So how can Carthy win tomorrow’s stage? I say he has a good chance if he makes the break. The only concern is that he may be ill, but he’s been loitering around the back of the peloton all race, saving energy. It seems pretty clear to me that he’s saving himself and targeting a stage. Tomorrow could well be that day, but I’m sure someone out there knows better than me! He is a very solid pick and one that I considered myself.

Break wins and I’ll go for a Spaniard. Omar Fraile takes the stage. 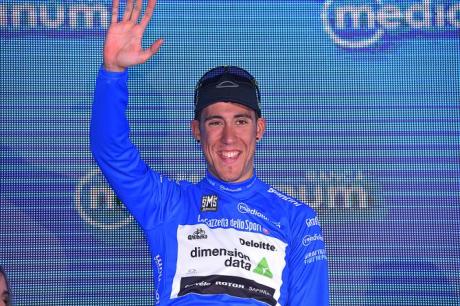 Small punts on each of the riders listed above (even Carthy!)