Another stage, another break! The three guys I highlighted (we’ll pass over Devenyns 😉 ) made the move but unfortunately none of them could take the win. Instead, it was young Frenchman Lilian Calmejane who took home a great stage. He’s another talented junior rider, hopefully he kicks on from this! 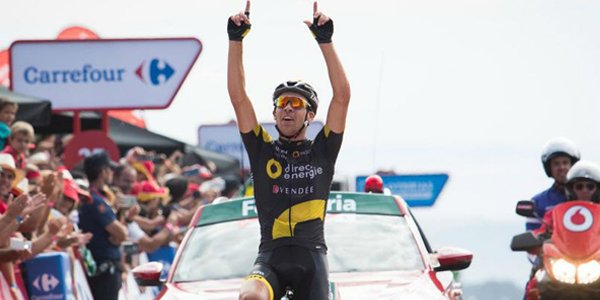 Atapuma moves into the GC lead, much to the delight of Carlton Kirby, with Valverde and Froome roughly 30 seconds behind.

Anyway, moving onto tomorrow’s minefield of a stage!

It’s another stage that is back loaded with climbing. There’s a real mix of everything tomorrow and a lot of riders will fancy their chances.

The flat start to the day could mean we’re in for another ferocious pace as the riders try to make the break. However, it is almost as likely that a break could be formed quickly and the sprinters teams take control of the bunch.

The second half of the stage is much tougher and is constantly up and down.

As you can see, it’s a real sawtooth profile. However, the actual changes in altitude/elevation are not that high, only varying by roughly 50m. Depending on the pace of the peloton though, this will sap the legs and tire the sprinters before the finish.

The finish itself is very interesting.

Over the course of the 7km, the road rises at an average of 1.4%. Not exactly challenging.

The toughest section is 3-4.8km (in the profile above) which averages 4%. However, there are some steep ramps of around 8%. It looks like a nice launchpad for a solo attack, or for a team to attack it aggressively, putting a few of the sprinters in trouble.

The final 700m of the stage is all up-hill as well, averaging 3%. It will be a long drag for some!

The run-in itself is technical and will be difficult to control, or organise the lead-out.

Before the start of the Vuelta I would have been very confident calling this one as a reduced bunch sprint. However, with there already being 2 break wins out of 3 road stages then we could well see the same again tomorrow!

Will BMC want to expend resources to hold onto the GC lead? Possibly. It will be good for the team to retain the jersey just now as they won’t be at the pointy end of the race by the finish! Therefore any break will have to be made up of riders far down on GC. There’s a good chance of that as anyone outside the top 50 is over 6 minutes behind Atapuma already.

So they’ll most likely take on the duty of setting the pace of the peloton and usher the sprint teams through to assist. Will they? The majority of the “sprinters” here will fancy their chances so the majority of teams will have an interest in bringing the break back. However, that all depends on the make-up of the breakaway. If they have a rider up the road, they don’t have to work.

It’s a very tactical day and a nightmare to preview!

A break/late attack/sprint are all possible and equally as likely outcomes.

For the sprinters, look to those involved on stage 2. With the “lower-quality” field here at the Vuelta, none of the so-called sprinters are actually pure sprinters, and most should relish the uphill run to the line. I would almost be tempted to go with Cort Nielsen again. He looked fast on Sunday and this finish reminds me of the stage he won in Denmark.

The break could be made up of anyone really, and for late-attackers look to regulars such as LL Sanchez, Hansen & Terpstra.

I’ve decided to approach this stage by picking three guys who could do everything and cross my fingers! There’s also a Snoop Dogg inspired pattern too…

Gilbert has been climbing very well so far this Vuelta and he seems to have a spring in his step now that he has a contract for next year. Sitting in the magical 55th place on GC (8’23 down) he will be given freedom. Furthermore, BMC can play the “we have a man up the road card and don’t care about Atapuma’s red jersey” tactic. A play-book classic that one! 😉 Otherwise, he can put in a big acceleration on the toughest section of the run in. He looked lively on stage 2! Or he’s saved for the up-hill sprint at the end that looks right up his street.

Gerrans sits in 72nd position on GC and is a very good breakaway candidate for Orica. I say this because he’s not needed to protect Chaves, and he wasn’t involved in the lead-out for Cort on stage 2. Practically the only guy left in the team once those jobs are taken away! Like Gilbert, he’ll be used as the rider up the road so Orica don’t have to chase. Also, he could attack away on the final rise. Or if Orica aren’t confident in Cort’s sprint, they may turn to him for the dash to the line.

However, I’m not backing either of those riders to win. His surname does begin with G though…

Like today’s stage, I’ll be backing a Caja Rural rider to win and that man is Jose Goncalves. The Portuguese rider can handle all three potential outcomes very well. He rolled in today within the grupetto and after saying he felt very good  yesterday, I can only assume he’s saving energy for tomorrow (maybe wishful?!). As we saw today, Caja are a very attacking team so will have riders up the road in the break. Goncalves showed on stage 3 that he can handle the steep ramps well, and has the potential to attack late. However, his main asset will be his up-hill sprint. These types of finishes are his bread and butter and he was going very well in at his preparation race; Volta a Portugal, earlier this month.

I expect him to be firing on all cylinders tomorrow!

Hope you enjoyed the preview! How do you think this difficult to call stage will go? As usual, any feedback is greatly appreciated. Anyway,