Rain, but not at the right time for us. The riders got soaked early on in the stage but it was dry at the finish. However, the organisers still decided to neutralise the final lap in terms of GC. All of this combined made it a lot less chaotic and the fastest sprinter in the race won: Greipel. It was too easy for him. Although a lot can be said for his team, Lotto Soudal did an excellent job controlling the last 20km for him. 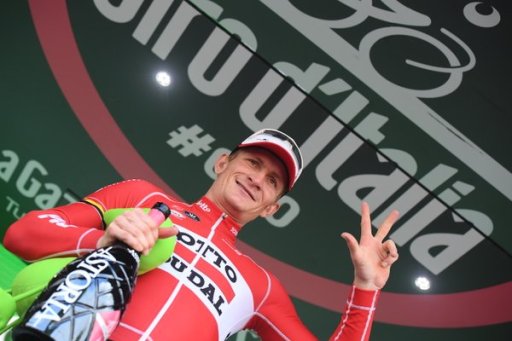 Modolo was in an okay position but just lost the wheel in the final turn. It looked as if he got a bit of a bump. Disappointing from him, particularly as Ferrari did a good job. Oh well.

As @cyclingmole pointed out on Twitter, the Italians will definitely look forward to the final week. Now that Greipel (and possibly Demare and Ewan) is going home.

With the sprint stages over for the foreseeable future, the GC boys come out to play tomorrow.

After today’s pan-flat stage, we’re back to the grippy stuff with the first 4-star rated road stage of the Giro (with the only other being the TT in Chianti).

“This is a very challenging mountain stage. The route takes in 4 categorised climbs in a row, with just a few stretches to let the bunch catch their breath. The first 45 km run on apparently flat ground, and are followed by three typical pre-Alpine climbs, marked by narrow roadway, high gradients and endless turns, both while climbing and while descending.” (Road book extract)

Averaging 8.9% for just over 7.5kms, this is a brute! If anyone looks to be struggling here, the other GC contenders will put the hammer down. Expect something from Movistar or Astana to try to isolate Jungels.

A tricky descent leads into the final climb, a Cat 2 ascent up to Valle. 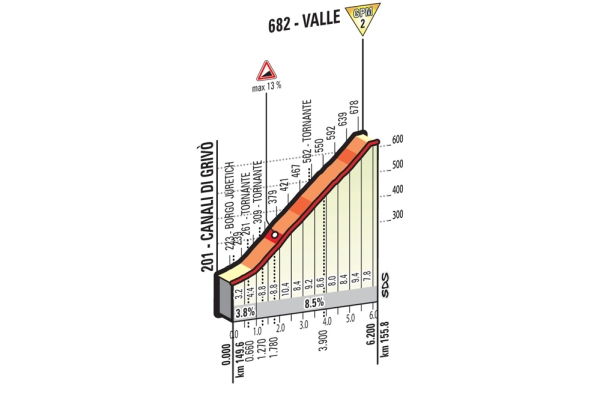 This climb isn’t any easier gradient wise, it’s just shorter. 8.5% for 5km this time round.

After that it’s a descent and a flat run into the finish line.

“The last 5 km are deceptively flat and actually run downhill all the way to Cividale del Friuli. The route features a few twists and turns over the last 1,000 m; the home straight (approx. 400 m in length) is on 7-m wide asphalt road.” (Road Book)

With my weather predictions being about as good as my stage predictions, I’ve decided to change who I’m getting my info from. Surely Weather.com has to be right?!

As you can see, it looks to be a mixed back with the possibility of showers. Although, at less than 30% then they don’t seem too likely!

With most stages like this, much will depend on the focus from the GC teams. If they decide to go all out then it’ll be a day for them and the current top 10 of the race. If not, then a break will win like we saw in stage 10.

I think we’ll get a breakaway victory tomorrow. The reason I suggest this is that with an even tougher stage the following day (Stage 14 – rated 5 star) some of the GC teams will not want to go too deep. Furthermore, I haven’t been wholly convinced by the squads of Astana and Movistar. The former rode very aggressively last year, but haven’t been as bullish in this years edition. Have they been waiting for this stage? I’m not so sure.

Like I’ve said in previous stage previews, to be successful in the break the rider has to be a good climber and no threat on GC.

The flat start to the day will ensure that it will be a fast first 50km, as everyone attempts to get in the break. Therefore, it also helps if the rider is relatively strong on the flat.

We’ll no doubt see the regular contenders giving it a go: Wellens, De Marchi, Cunego etc. Along with riders from the other pro-continental/Italian teams.

Like last time, I’m going to highlight three riders who could give it a go:

As I said above I think a breakaway wins. From those three highlighted above I think Moser will continue the good family name and get his maiden Grand Tour win! 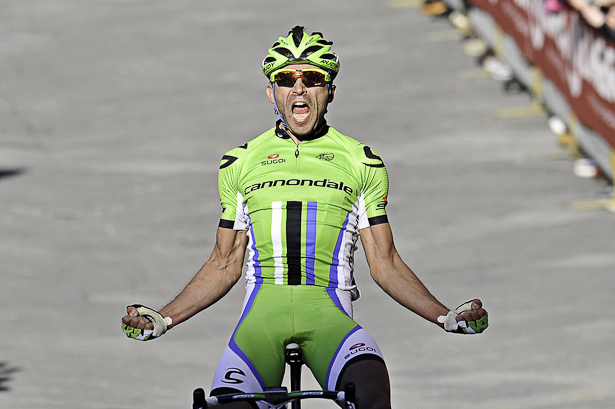 There is a chance we get a GC showdown. If so, look to the strongest on the final climb yesterday; Nibali, Chaves and Valverde.

Another day to choose your breakaway lottery tickets and hope for the best!

Look out for other bookmakers as they might price more generously. I’ll probably have a few selections on the BF Exchange as well, because you can normally get better odds there.

Will go in-play if it’s going to be more of a GC day.

Hope you enjoyed the preview, we should be in for a much more exciting stage than today’s offering! Any feedback/discussion on Twitter would be great as usual. Anyway,