Definitely not as easy a day as some thought. A big crash and the only categorised climb ripped the race apart, with only GC contenders left at the front over the summit.

Amador attacked, Jungels countered. Then some stalling behind saw more riders rejoin. Ulissi drove clear of the group behind up the final climb, catching Amador and Jungels. The latter drove the group, trying to get as much time over the rest of the GC favourites behind. Ulissi sprinted for another fantastic win, his second of the race. 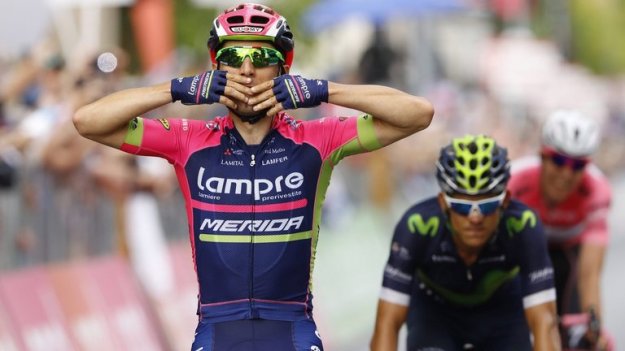 *I apologise in advance if this is shorter and more blunt than normal, I’m terribly hungover* 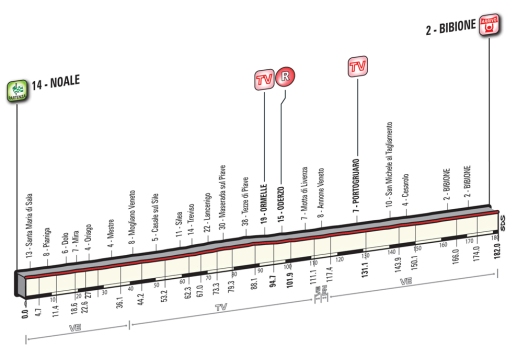 This is one of those stages where if you miss the first 180km, don’t be too concerned!

The most interesting part of this stage will be the circuit that they cover in the finishing town of Bibione.

It’s a very technical closing circuit, with lots of 90-degree turns that will kill the momentum of the riders. Positioning will be crucial in the final lap. But so will bravery, because if the riders are willing to take risks through the corners then they can save a lot of energy/drop those behind. This is particularly true if the person behind isn’t as confident and loses the wheel.

Another reason why the risk-takers of the peloton will more than likely be rewarded is due to the weather forecast. Like much of this Giro, we’ve been given some chance of rain at the finish line. However, it seems various outlets are confident of this, which makes it seem more likely! *Fingers Crossed*

The rain will make the closing circuit even more difficult for the riders, with more precarious corners etc.

Some of the riders will not like the look of this.

Who are the stage contenders?

Let’s start with the only sprinter left in this race who’s won a stage: Greipel. The fastest and most powerful rider left (after Kittel’s withdrawal) on paper he should be the favourite. However, as the cliché goes, nothing is ever won on paper. I don’t think Greipel will win tomorrow. Mainly due to the inclement weather conditions as Greipel goes missing when the conditions get tricky. I said something similar for the Stage 7 preview. We didn’t get the rain that time round, I’m more confident  we’ll get it this time. Greipel won’t podium. 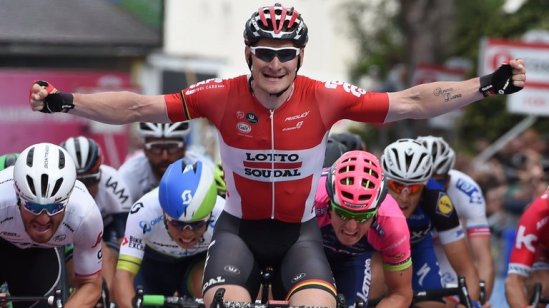 Nizzolo was second that day and has to be considered here. He won the bunch sprint today, so is clearly going well. I’m just not convinced by his lead-out.

Demare probably has the longest lead-out left. They didn’t get it right on Stage 7 and a few of them went down/are unknown quantities after today’s crash so I’d avoid him. I also question if he would want to risk a severe injury, considering this is the Giro and not the Tour. Therefore… 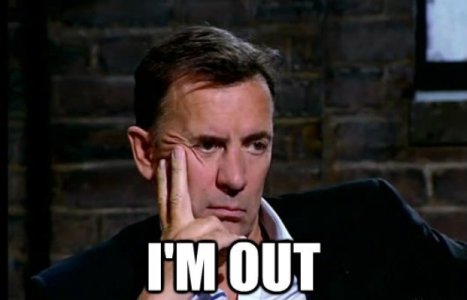 Someone who will take risks tomorrow is Modolo. Again, like the Stage 7 preview, Modolo has all the credentials to go well here. He’s an excellent bike handler so will be able to manage the sharp turns perfectly. Furthermore, in Ferrari, he has an exceptional lead-out man for this type of sprint. Modolo has to start as joint-favourite at least for this (with Nizzolo) in my opinion.

Who else can compete?

Ewan looks the most suitable candidate. His criterium based background will hold him in good stead for tomorrow. Being young as well, he’s not as afraid and has a larger incline to take risks.

I guess the likes of Hofland, Trentin and maybe Ruffoni, Arndt and Belleti could get involved.

Leigh Howard also might fancy a go at it (after his impromptu fishing trip today). He won a crit-style race at the Clasica de Almeria earlier in the year.

Modolo wins. The master of the tricky finale.

Ferrari will once again give him an excellent lead-out and he’ll get the first Italian sprint win at this year’s Giro. 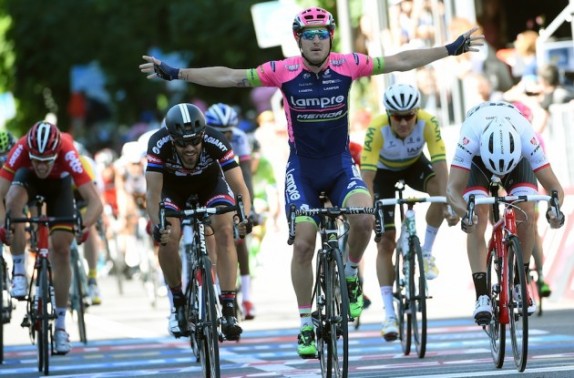 Ewan and Nizzolo will round out the podium (in that order).

Pretty simple stage betting wise. There is no way that the break will succeed as it’s the sprinters final chance before we get to stage 17 (maybe) or the final stage into Torino.

Hope you enjoyed today’s racing as we’re more than likely in for a snooze-fest tomorrow! I plan on being productive and writing the bulk of my preview tomorrow during the race, so it will just be a case of waiting on odds, so it should be out a lot earlier! Apologies again for the shorter length, I’m hungover and there’s not really that much to say. Anyway,