A manic day in the saddle where the race was 3km/h ahead of the fastest expected schedule. It took for over 80km for the break to form and when it did Pinot found himself up there along with 18 others. They were never given a lot of time with the gap hovering around the 3:30 mark for most of the day but they did have enough to fight out for the stage win.

It became a very tactical finish but a duo of De Marchi and Restrepo escaped with around 20km to go, and it was the BMC man who dropped his companion on the final unclassified climb, managing to ride solo to the line.

Restrepo held on for second place while Pellizotti rounded out the podium.

Behind, the GC riders dropped pretty much everyone else on that final rise thanks to a strong pace from EF Education. However, they all arrived at the line together so no time loss. Well, apart from De La Cruz (7 seconds), Buchmann (8 seconds) and Aru (41 seconds) who all shipped a bit of time.

With today’s stupidly fast pace, I’m sure there will be several in the bunch hoping for an easier day tomorrow, so let’s have a look at what is in store for the riders.

Another day out with 3000m of climbing: that might not be music to the ears of plenty in the peloton after all.

It doesn’t appear as difficult a stage because there aren’t as many big climbs, but the road is constantly up and down and will be very draining.

Once the riders pass through the 50km to go banner there are no more categorised climbs, but that doesn’t mean the ascending stops. According to the Strava profile I’ve made, there is a total of 948m of elevation gain but that does seem a little on the heavy-handed side in my opinion. Something like 750m might be a bit more realistic.

The first of the small drags to contend with in that closing 50km is 2kms at 5.5% and starts with 40km to go. Some flat land then leads onto a 2.9km (6%) climb which has a just over a kilometre at 10%. A fast descent and more flat sees the riders into the last 20km of the day which can certainly be described as rolling. 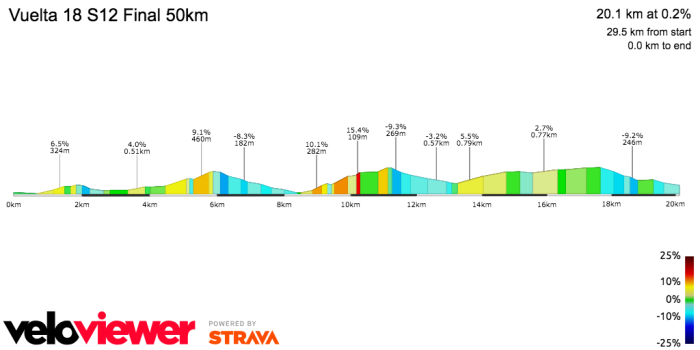 It is pretty much up or down all the way to the finish.

The three main rises can be classed as 2.4km at 4.5%, 2.7km at 5.5% and 4.1km at 2.3%. Throughout the first two of those climbs, there are several sections with steeper gradients and the hurt can be put on within the peloton. Once over the last drag, there are only 2.5km left in the day, all of which are pretty much downhill.

A fast finish to the day and given the potential showers throughout the afternoon, it might be a sketchy run in. It is meant to be very windy throughout the stage too but it shouldn’t be an issue at the end of the day because of how sheltered the roads are. However, it might cause another frantic start to the stage with the riders travelling along the coast.

One of those days where we could feasibly see several outcomes, making it a tricky one to predict.

The finish looks good for Sagan and if the rumours are true, he might be heading home after tomorrow’s stage so going out on a win would be great. However, the stage could also be good for someone like Valverde if the climbs are rode aggressively in the last 20km in an attempt to detach the faster sprinters.

Tomorrow will either end up with the break winning, a reduced bunch sprint, or a late solo attack.

The climb at the start of the stage is a good opportunity for a strong group to go but the “easy” roads up to the half-way point of the afternoon could see them controlled. Yet, the second part of the stage is much more difficult for teams to keep a lid on things so they might just be happy to let some riders go. Another factor that lends itself to the break staying away is just how fast and crazy today was. There are plenty riders in the peloton who will have suffered and the GC teams will want to keep their domestiques fresh for the coming mountain days so they won’t chase. Instead, it will probably be up to the likes of Bora to try to hold things together if they want a Sagan stage win.

A reduced bunch sprint has a good chance of happening if we get one of this piss-poor breaks where three guys just roll off the front in the opening 2kms and everyone sits up. The peloton will easily be able to control them and bring them back slowly over the second half of the stage. However, it will then depend how aggressively things are raced as to just how reduced a bunch we get at the finish. I think a lot of the sprinters will struggle.

The late attack option can only happen if the break has been brought back, obviously. If we see a fast pace that gets rid of the sprinters, then it helps those wanting to attack as there will be fewer teams wanting to hold things together.

We might even see some crazy early echelon action if some teams want to push the pace on.

Hmmmmmm. I don’t really know, this is tough.

Break. I’ll go with the break so I guess it is that time again…

I’ll keep this brief as I’m pretty much pulling names out of a hat.

Victor Campenaerts – Same reason as yesterday’s preview. He seems strong this race but hasn’t had the chance to shine for himself. Will want a hit out at some point over the coming stages before the TT.

Rohan Dennis – Think he is the only BMC not to be in the breakaway so far this Vuelta: will that change tomorrow? Like Campenaerts, I think he will want to open the taps up fully a few days before the TT. The rolling stage looks good for him tomorrow and he can certainly hold off a strong chase behind.

Steve Cummings – Meh, why not?*

*Please don’t actually tell me the numerous reasons why.

Laurens De Plus – One of the teams who might try to hold things together are Quick Step as they possibly might fancy Viviani’s chances of making the line. To counter the expected work they will have to do though then they could send someone up the road. De Plus was very active at the start of the day but paid for it at the end of the stage by losing time. Can he recover and go again? He has looked in great shape so far this race.

Lukas Pöstlberger – Like Quick Step, a lot of the workload will be left with Bora tomorrow. Sagan was dropped a few times today so maybe he was feeling the effects. If so, then attacking could be their best option for the stage. Pöstlberger made a few of the earlier moves but missed the ones later on but he could be the type of rider to attack tomorrow.

Peloton will want another rest day so they will go easy, allowing the break to win. Dennis to take the stage! 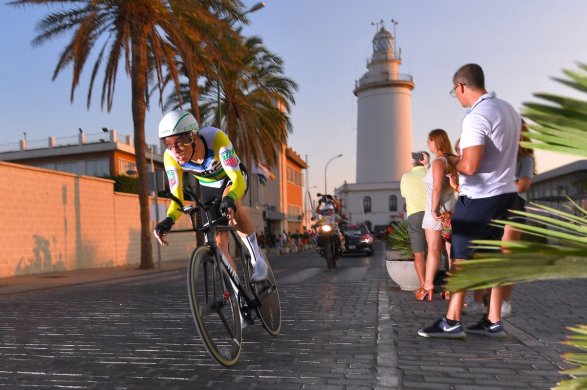 Small stakes on the break picks as I’m really unsure of how tomorrow pans out.

Backing the latter in case of the reduced bunch sprint and Valverde going for the stage to take the red jersey.