Well I pretty much had today’s stage bang on in yesterday’s preview, if we just ignore the part where I decided to dream about a Benoot victory…The Lotto Soudal rider was with the front group but pulled off and swung left at roughly 2km to go, possibly struggling with the heat and rhythm of the bunch.

De Plus launched a very strong attack with just over 1km left and gained a reasonable gap while there was a bit of marking out behind. Valverde bit the bullet (see what I did?) and hit out to close him down, with only Kwiatkowski being able to stick to his wheel. The Pole came round Valverde at 250m to go, leading into the last corner. It worked out perfectly though for the Movistar man who was able to use Kwiatkowski’s slipstream and launch past him in the final metres to take the win. 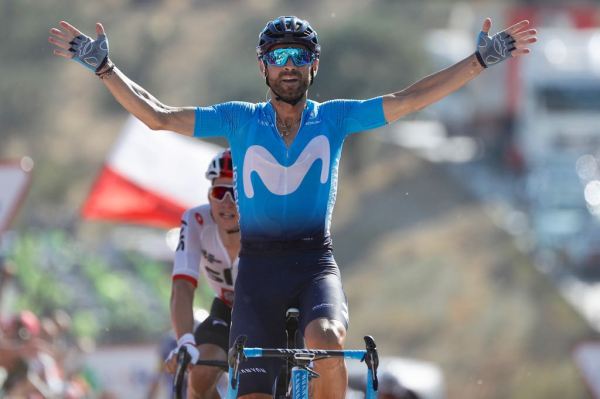 De Plus held on for third with a whole host of GC riders coming trailing in behind.

The result on the day means that Kwiatkowski moves into the leader’s jersey, 14 seconds ahead of Valverde and 25 ahead of Kelderman. With the parcours to come tomorrow, he should hold on to it, but who knows. Let’s have a look at what is in store for them…

A classic Vuelta “sprint day” where the riders have to traverse two categorised climbs, including the first Cat-1 of the race, and several other unclassified ascents, totalling over 3000m of altitude gain. Javier Guillén is the biggest patter merchant going!

The Cat-1 climb of Puerto del Madroño averages 4.4% for 23.5km so it isn’t too tough gradient wise, but it is the length and heat combined that will cause some issues. If we don’t see the break form until here, then expect it to be strong again and it might be one that could go all the way.

The terrain continues to roll for pretty much the remainder of the day, taking in the Cat-3 Puerto del Viento (6.4km at 4.3%) and the uncategorised rise just after the feed zone which comes in at 4.1% for 6kms.

A long descent follows before yet more rolling terrain and some rises before the intermediate sprint point with only 25km left in the day. 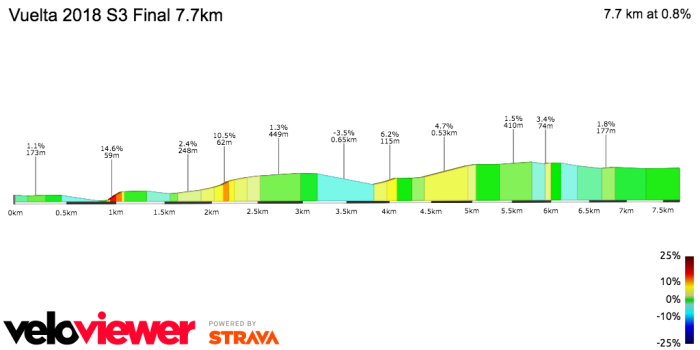 As you can see on the profile above, there are a few rises in the closing 7kms, with the most notable of them being a 1.2km drag (3.6%) average that ends with just 2.5km left in the day. From there, it is mainly flat, if not ever so slightly downhill all the way to the line. 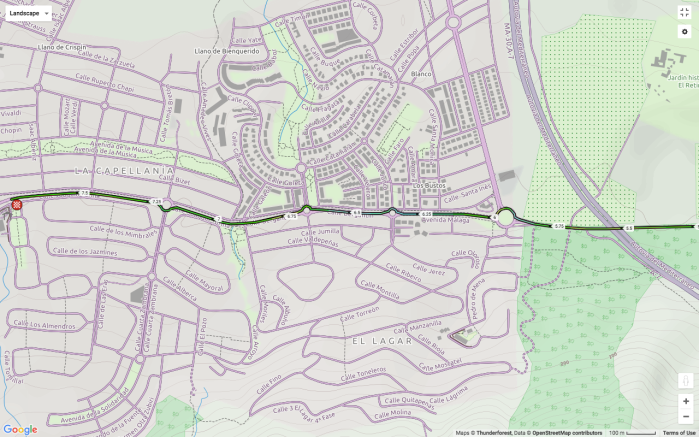 There are 4 roundabouts to traverse in those closing 2.5km, just a typical Vuelta finish really. The last of those comes with roughly 600m left but it is quite open so it shouldn’t be too bad.

Question Number 1: Break or no break?

The stage looks great for a breakaway to establish a good gap before the sprinters teams can start chasing properly once they are over the Cat-1 climb and normally it would be a good stage to get into the move. However, the issue lies with the fact that Kwiatkowski currently leads the overall and Sky might be keen to keep him in that position so they will keep things on a fairly tight rope, hoping to get some assistance later on. Consequently, I don’t think we’ll see the break win tomorrow despite the favourable profile, although I’ll still give it an 20% chance of it happening.

We saw today that several of the sprinters bailed out early on what was an easier stage than tomorrow. It is hard to read into that though as many of them wouldn’t have rated their chances at all and just decided to save their energy.

However, we are in for a similarly hot day tomorrow and more climbing metres (roughly 400m more), then we could see several sprinters dropped early and not make it back. It will be interesting to see who pushes the pace on and given their current form, I think both Valverde and Kwiatkowski might fancy their chances in a reduced bunch gallop. Consequently, we could see Sky and Movistar form an entente cordiale at the start of the stage and drop most of the fast men on the opening climb. As looking at the stage profile, there isn’t really a lot of flat land where a team can make a concerted chance to get back if the pace is on at the head of the race. It’s not really until 40km to go that the major difficulties of the afternoon are out-of-the-way.

The slightly rolling run-in to the line as well could see some surprisingly lose contact after a tough day. If not, their zip might be gone.

It’s a tough one to call, but I think we’ll see a reduced bunch sprint of maybe 70-90 riders.

Arguably the best sprinter this year, Viviani has had a truly incredible season. He recently won the Cyclassics Hamburg in rather dominant fashion but somewhat disappointed today. I would have expected him to stay with the bunch for longer but as mentioned above, he might just have decided to write the day off and focus on tomorrow. If he can manage the climbs and make it to the line, then he has to be the clear favourite.

Another who disappointed me today, he finished ahead of the gruppetto but not by much, coming home almost 11 minutes down. Sensational in this race last year, will he get given the same free role now with Mitchelton? Theoretically he should be one of the fastest “climbing sprinters” here, but does he have the form…His win in Glasgow would suggest so but today’s performance doesn’t. Hmmmm.

He just seems to be able to continue his great form, doesn’t he?! Today he got played by Valverde who let him lead into the final turn and the Pole will be desperately gutted to have missed out on the stage win, again. Being in the red leader’s jersey isn’t a bad consolation but he will want more. Sky have a strong team to put the sprinters into trouble early and if they form an alliance with other squads, we could see the current race leader sprinting for the win from a reduced bunch. He clearly has the form and speed at the moment to go well and the rises before the line will help to bring him closer to the fast men.

Can El Bala make it two in a row? Much like Kwiatkowski, Valverde packs a good sprint on the flat too and he’ll no doubt want to chase some bonus seconds so he can move into the race lead. If the race is aggressive and attritional tomorrow then he has a great chance. 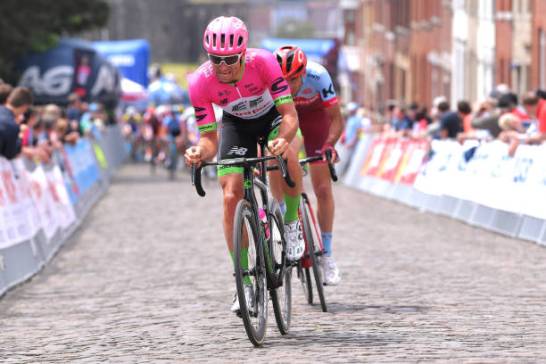 Slightly left-field pick but he impressed me a lot on the tougher finishes in the Vuelta last year and he seems to be arriving here in good shape. He was the best finishing “fast man” today, coming home only 2’15 down on Kwiatkowski. He should make it over the climbs with the main group tomorrow and if some of the properly fast guys have been dropped then he has a great chance of pulling off what is a shock result.

I still remember fondly the 2014 Vuelta and just how strong Nacer was then, it is a shame to see him a shadow of his former self, or is he? Today he came home alongside Nibali and Benoot: not exactly bad company for a sprinter on a tricky finish. To me that indicates that his climbing legs are starting to come back and I think he will be up for it tomorrow. On his day Bouhanni can climb very well and I keep harking back to his win in Catalunya last year. One to watch.

The Bahrain rider really announced himself with a third place from the breakaway during last year’s Vuelta on what was a difficult day out. Like Bouhanni, he finished alongside his team-mate Nibali today so there is obviously a reasonable amount of form there at the moment. With Bahrain looking a little lacklustre GC wise already, only Ion is left, then they might turn their attention to Garcia tomorrow: he certainly could challenge for the podium in a reduced gallop.

Note I’ve left out Sagan (probably at my peril) because I still don’t think he’s 100% and isn’t fit enough to compete. Also left out Walscheid as he can barely get over a speed bump.

Reduced sprint with some of the sprinters missing out. 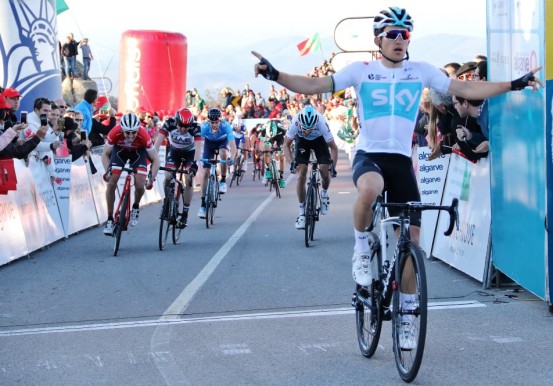 Kwiatkowski to get that win!

Should cover a few bases. Maybe not a Viviani win though!

Thanks as always for reading. Who do you think will win tomorrow? Will we see a sprint, reduced bunch sprint or even a breakaway contesting for stage honours? Anyway,