Most boring stage ever. Although I would be lying to you if I said I watched all of it. I tuned in for the brief echelon action then switched off until 1.5km to go. That new Fortnite season isn’t going to play itself.

Groenewegen produced a superbly powerful effort, timing his full sprint to perfection and winning comfortably in the end.

Gaviria and Sagan rounded out the podium and continued their battle for green but they were no match for today’s winner. Onto tomorrow!

Another day for the sprinters? Some might have different ideas, it is Bastille Day after all!

Nothing much to report here and although the riders travel through some exposed areas of land, the wind looks like it will be too weak to cause any splits. If anything, it might be a bit of a headwind throughout the afternoon. Fingers crossed again though. 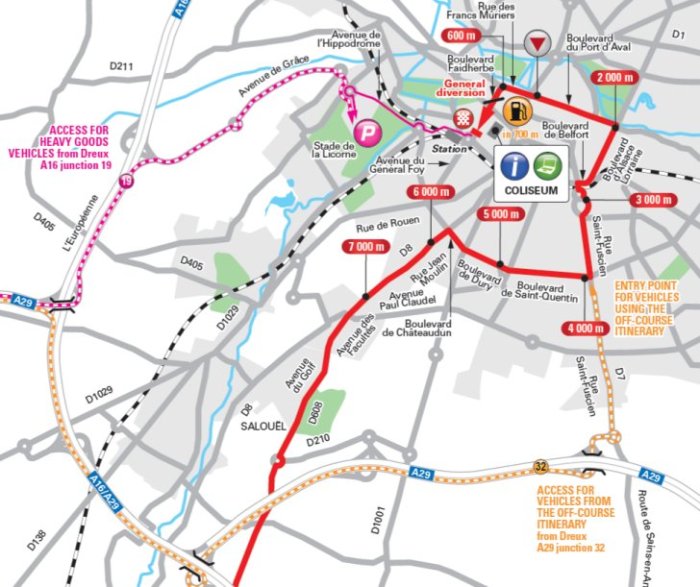 The riders will have to brace themselves for a technical finish though with several roundabouts and turns to be tackled in the closing 10 kilometres. It shouldn’t actually be too bad though with the majority of it being on wide roads.

As you can see on the video the most techincal parts are at roughly 4km and 3km to go, so there is still time to move forward after then.

Even the last turn at 600m to go is actually through a roundabout but that itself has plenty of room.

See, nothing to worry about! Unless of course we get some light rain that is forecast for late afternoon/early evening.

The last 600m are dead straight and rise ever so slightly, around 1%, but with a litte bit of a tailwind behind them it should just seem like a normal flat finish.

There will probably be a big fight between the French riders to get into the morning break in the hope that the sprint teams mess their chase up or fancy a day off. We saw during today’s stage that a few of the bigger squads actually got a rider in one of the initial moves and I wonder if we will will see something similar. If the likes of Bora, Quick Step and Jumbo are represented then the break actually has a really good chance of staying.

The headwind for the majority of the afternoon doesn’t help them though and it will be a tough task. It will need a group of 7 or 8 for it to stick. Will the peloton allow that size of group to get away? I’m not so sure.

Having a strong lead out will help in the tricky-ish finish but it is not as paramount as I first thought it would be. Those who can latch onto the wheels can certainly do well too.

Gaviria v Groenewegen v Sagan is the big sprint fight at the moment and they do look a class above everyone else.

Gaviria has the advantage of the best lead-out, Groenewegen arguably looks the fastest and Sagan, well, Sagan is Sagan.

The type of finish would be perfect for Kittel but who knows what Marcel will turn up tomorrow. He was out of position today but the wider roads in the closing 2kms do give him a chance to move back. I still don’t think we have seen the best of him this race. I hope he goes well tomorrow.

Démare will be there or thereabouts again but he has been quite disappointing so far this Tour, as will Greipel and Kristoff but I just don’t think they have the speed to win.

Others could be in the mix but I really can’t be bothered to repeat myself for about the 4th time this week!

Groenewegen probably doubles up but I’m going stick my neck on the line and go with Kittel. Tomorrow is his day to remind everyone what he can do by delivering a stunning, tail-wind aided, 350m sprint. Mainly because he started too far back and had to go early. It’s a Kittel classic!

He can’t be trusted with the full 2pts. Was tempted to go for some breakaway shots but the headwind has ruined that idea.

Sorry for the shorter preview but I’m shattered from work and today’s stage didn’t exactly excite. Will be back to normal tomorrow! Anyway,