Easy breakaway stage they said and I guess it was as a two-man group stayed away until the end. That is if you ignore everything else that happened throughout the stage.

All hell broke loose on the opening climb after Chaves popped and we saw the other GC teams come to the front to drive home the advantage. Long story short, that is the Colombian’s GC tilt over for the year and today can be summed up with the classic “It’s the Giro”.

Eventually we saw some attacks in the finale and it was Mohoric who got away with Denz after they managed to drop Villella on the final few rises. In the two-up sprint the Bahrain rider took it up early and it looked as if Denz was going to come round him but the German just didn’t have enough to do so. 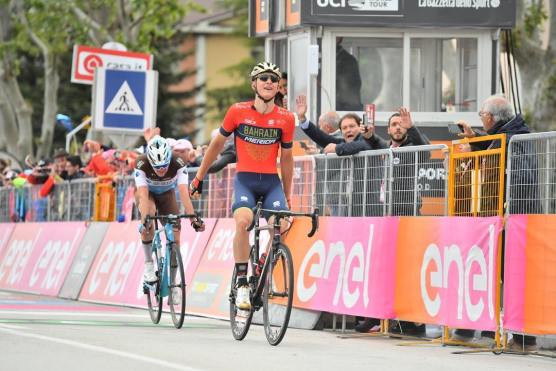 Bennett “won” the bunch sprint behind to round out the podium.

Will we see another crazy day tomorrow? Let’s have a look at what is in store for the riders.

A fairly easy day out in the saddle but one that packs a sting in the tail. 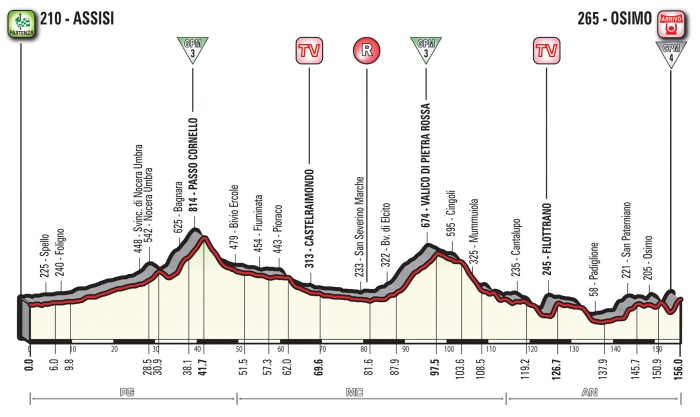 There are two Cat-3 climbs for the riders to contend with on the route but it is the rolling finish that will be where the stage is decided.

First up is the uncategorised climb of Filottrano, which just happens to be the spot of the second intermediate sprint of the day. 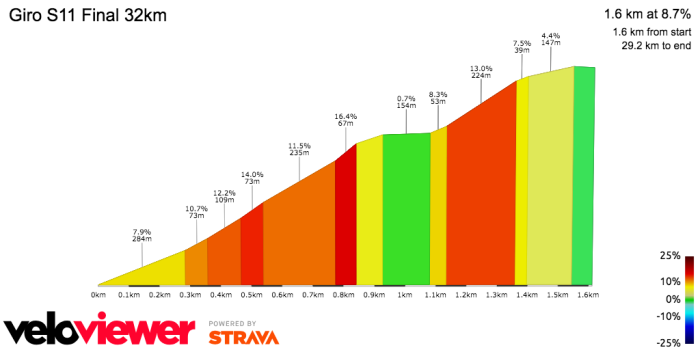 With an average of 8.7% for 1.6km, it is a very short but tough kicker, especially when there are several hundred metre segments that average above 10%. The climb crests with just under 30kms to go and slowly heads downhill for the next 10km.

It is the closing 13km once we approach the finish town of Osimo that things will really get interesting. 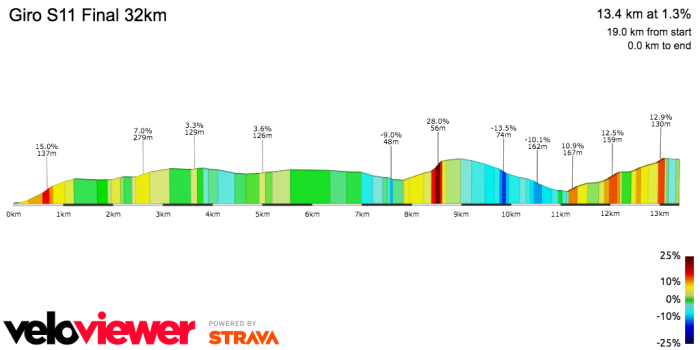 You can view the profile here.

The first climb you see on the profile above averages 7.9% for 1.2km and it precedes roughly 6kms of rolling road which will make it very difficult to control for any team who wants to set up a frantic finale in the last 5km. Speaking of which, they look perfect for opportunists. 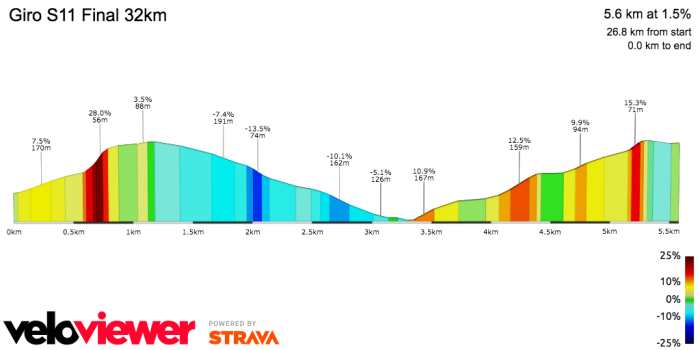 The opening climb is 1.1km at 7.6% and even features a section of pave, which just happens to be on the steepest section.

A pretty sketchy descent follows before the final 2km which are predominantly uphill, averaging just over 6%.

This is a finish that will excite a lot of riders.

Looking at the forecast though and the predicted rain showers throughout the day, it will make this a very nervous finish because of the narrow and twisty town roads. There is potential for some GC riders to lose time.

Break or No Break?

A recurring theme throughout the Giro so far which I’ve got wrong pretty much every time. Although to be fair, Bouwman was caught with 1km to go and Masnada at 3km so it’s not as if they’ve been miles away and with teams acting differently they could have stayed away. Today was actually the first “breakaway” win we’ve had this Giro but you could almost class it as a late attack. However, with the winning move technically going at over 30kms from home, I’ll call it a breakaway just so my hat stays intact!

After today’s tough stage will some in the peloton want an easier day tomorrow and be happy to let the break go? Possibly.

It is one of those stages where a lot of guys will fancy their chances, including our current GC leader, but will they commit to a day of chasing for the stage? Possibly.

The way this Giro has gone so far I don’t think I can commit fully to either but I give the break he edge, just 60:40.

Tomorrow’s stage is in part a memorial to Scarponi as they pass Filottrana which was where he resided. I would expect Astana to have a big say in the outcome of the stage and they will no doubt either be involvedi n the break of the day, or work hard to pull it back to set someone up.

If we see them get into the break expect it to be Lutsenko, Sanchez or Villella who represent them, with Sanchez (again) or Bilbao the likely candidates for the finish. Although Lopez also might fancy his chances.

I think they’ll go with Lutesnko though. He’s been very quiet so far this race which is fair enough considering this is his first event back after injury. He should be up to race speed by now and I think he’s just been bluffing somewhat and saving himself for a big dig some day soon. We saw at the Vuelta last year just how strong he can be. Can he repeat the feat?

I could name many riders again who might feature but I’ll just keep my rotation small and go with two guys I’ve previously mentioned. This might be quite short then! 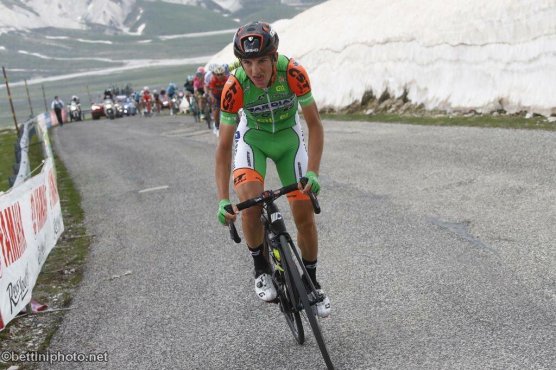 He’s been very lively so far and was off the front in the doomed morning break before attacking for KOM points late on. Clearly on good form, the sprightly and punchy rider should enjoy the climb to the finish. Can he take his second Grand Tour win?

The second rider to make my selection for the second day in a row, Masnada was the Androni rider we saw attack off the front of the peloton later on in today’s stage before Vendrame countered. Again, with him being the last of the break to survive on stage 9 then he is clearly in good form. If he manages to sneak away and take the win then he’ll secure Androni’s first win at the Giro since 2012.

Given the bad luck with picks the past couple of days, I thought it would be a good time to bring the Wongshot out for the second time this race. The magic oracle (i.e. random.org) has spoken… 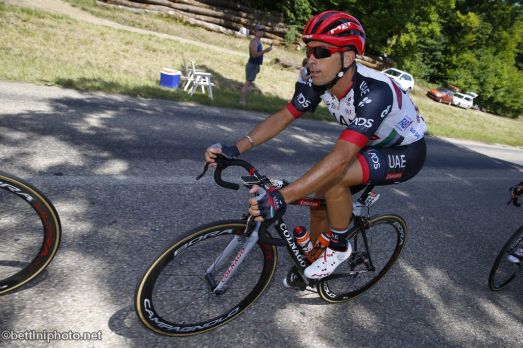 The UAE rider is possibly a bit past his prime and is nowhere near the same rider that he was at Vacansoleil but he isn’t the worst candidate for a stage like this from an average looking break. Formerly a very strong one-day racer who can go well on short climbs, take his good results in the Tour of Denmark or GP Marseillaise for example. As a whole his team have been pretty disappointing this race but they have some cards to play and while Marcato is further down the pecking order than Conti or Ulissi, that might just work to his advantage. He’ll launch an audacious attack in the final 15km and while everyone looks at each other to chase his gap will grow to an insurmountable amount. 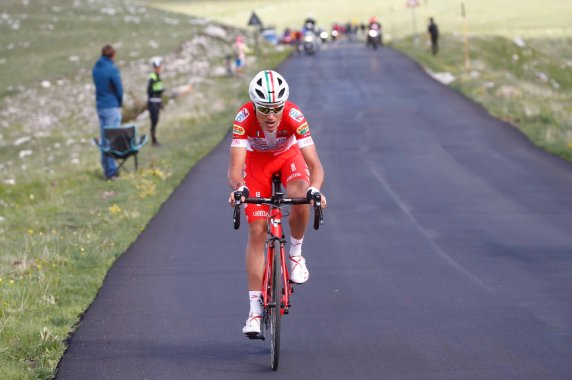