That didn’t go exactly to plan but who cares as Schachmann managed to out-sprint his breakaway companion Rubio for victory. A combination of many different factors saw the two rider break manage to stay away on the reduced stage when it seemed as if everything was against them.

Behind Bennett sprinted comfortably to third but it was too late. Bora’s lack of work in the last 15km certainly didn’t help the Irishman’s cause!

Could we see a similarly tense stage tomorrow? Let’s have a look at what is in store for them.

We end the race with the traditional Barcelona stage and it’s Montjuïc climb.

The day starts off with some rolling roads and a few climbs in the first 50km before another 50km of pretty much transitional roads before we hit the circuit. 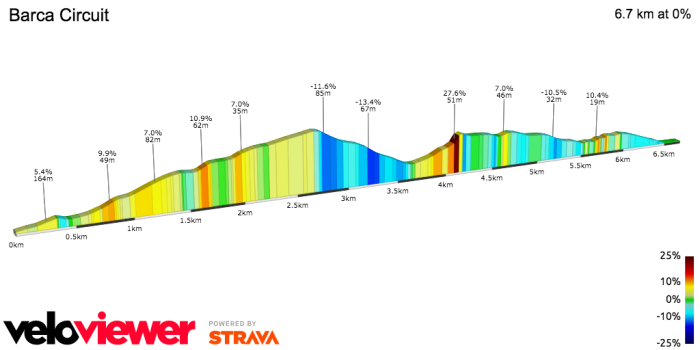 The circuit can be split into two parts with a longer opening climb before a shorter, punchier effort in the second half.

It’s not an overly tough climb but given the pace that they tackle it the gradients will seem a lot more difficult than they appear on paper. Combine that with the fact they do the ascent 8 times in 55kms and you end up with a good amount of climbing metres at the end of the day and a stage that somewhat represents the rolling terrain of the Spring classics.

Once over the top, the riders plunge down a wide, main road at high speeds before the road ramps back up for another 500m or so.

The riders do make a right hand turn onto the hill so they do lose a bit of their speed but the first 100m or so should be taken with relative ease. However, in the final 400m a rider can bury themselves and use the steeper gradients as a springboard for an attack. We saw this last year where Dan Martin put in a stinging acceleration that only Valverde was able to match.

With only 2.5km of mainly descent to go once they reach the peak of the hill, will anyone be able to bring an attacker back if they have 5 or more seconds?

Movistar and Valverde have to be very attentive as it is still possible for the likes of Bernal or possibly even Latour to spring a surprise if things get hectic. However, this stage is our current race leader’s bread and butter so it would be a shock to see him lose the race. In fact, he is the favourite for the stage!

Yet, I think there is a chance some further down the order escape in the last lap to take the win.

Again like the past few days, I don’t have a load of time to write this so I’m just going to focus on two riders who I think might have a chance in slightly different situations.

I can see tomorrow being a very attacking and fastly ridden stage just like it was last year. That means we’ll have a lot of tired bodies in the finale, including some of the Movistar riders. Everyone will expect them to work for Valverde and the stage win but attack is the best form of defence, right? Soler has already proven this year how strong he is and with Quintana and Valverde marking any move behind, he might manage to sneak away and take the stage as a reward for his hard work this week.

Since his probing attack on the final climb of stage 5 I’ve had him on my short list for the stage. At the start of the week I think he was still recovering from the illness that plagued his Tirreno. Consequently he finds himself 2’46 down on GC and no real threat. On this stage last year Quick Step were very attacking and I think we’ll see Jungels give it a go at some point. There is no need for Movistar to chase him and if he produces a strong attack, he might just hold on like his team-mate did today. They’ll certainly be full of confidence although that’s not something that QuickStep lack anyway!

Jungels to sneak off the front and take the win.

Or he just puts it in the big chain ring and powers to victory like he did in the Giro!