The break managed to stay away in the end, but only just. Pantano won the day in a similar vein to the way he won his Tour stage back in 2016, out-sprinting Laengen to the line. 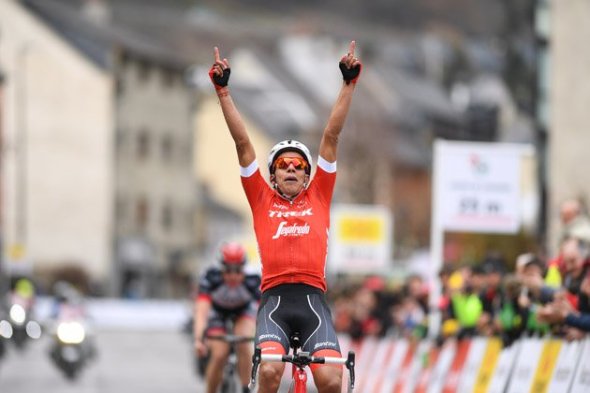 A fast finishing Mohoric did his best Pibernik impression celebrating as he crossed the line, only to realise that it was just for third place. Oh dear! Valverde came home comfortably in the group to retain his GC lead with only two stages remaining. Let’s have a look at what is in store for the riders tomorrow.

The riders might be forgiven to think they’re suffering déjà-vu tomorrow as the opening 77kms of the stage are today’s finale but in reverse.

With the stage starting off on a climb, expect plenty of riders to be on the rollers beforehand and we could see an explosive early part of the day. Once they hit the peak of the climb the following 30km are all pretty much descent, although the first half is a lot steeper.

At around the 42km mark they’ll start climbing the Coll de Perves.

A fairly easy climb it does go up in steps and there are a few kilometres above 6%. It’s too far out for any real drama though. The same can even be said for the Port d’Ager which is the final climb and crests with 70km to go.

A long descent follows with the final 42kms taking place over mostly flat but ever so slightly rolling terrain.

The finish is fairly easy aside from two roundabouts in the closing kilometre. So maybe not that easy after all…

The road properly narrows down into one lane for the last roundabout so if we get a sprint positioning will be key; once through the turn it will be a straight 300m run for home.

Break or no break? That is the question.

A tough start means that the sprinters will be on the back foot from the gun and their teams really won’t be able to start a chase properly until we finish the categorised climbs for the day. We don’t have many sprinters left here anyway with Bouhanni, Hodeg and Walscheid having already packed up their bags and gone home. Some teams are also lacking in team-mates to control the bunch for their fast men with Bora for example already down to 5 and that includes Bennett.

In my opinion the outcome of tomorrow all comes down to the attitude of one team; Mitchelton Scott.

They’ve shown a keen interest in either chasing down breaks, setting the pace at the front of the bunch on the climbs. In their midst they have Impey who will fancy his chances at getting involved now with the aforementioned riders gone. However, Mitchelton might still think that there will be other riders who are faster than the South African and they won’t want to use up their resources with a tricky final stage on Sunday.

So once again I think we’ll see the breakaway fight it out for stage glory, as long as there is no one dangerous on GC up ahead, although I would be fairly confident in Movistar managing to control the break and keep Valverde in the lead come the end of the day.

Tomorrow is a really weird one as given the stage starts on a climb, the break will more than likely be filled with those who are capable when the road goes uphill. Yet, the final 70kms will be less than ideal for a mountain goat so we could see some surprising results. Nonetheless, I think it will be a big move of roughly 18 riders that go so we should see all shapes and sizes up ahead!

With Hodeg no longer in the race Quickstep will most likely be in an attacking mood. Schachmann has shown earlier in the season at the Classic de l’Ardeche and the Drome Classic that he is not afraid of a rolling day in the saddle. A strong rider against the clock, he’s slowly developing into one of the better young rouleurs in the peloton. We saw on Stage 3 that he got involved in the sprint for minor places so he has a reasonable turn of speed.

I’ll give the Mitchelton Scott rider another chance for tomorrow, if they get a rider in the break, the move definitely sticks. Far enough down on GC not to be a threat, he is their most viable option for the break. Power is a strong climber who should be able to follow most on the opening ascents. Will he have the, ahem, power to make an attack in the finale or will he trust his sprint?

Can Trek make it two in a row? With no rider in the top 40 on GC they need to attack like today if they want to get anything out of the race. Skujins has shown already this year that he is not afraid to go on the offensive with a solo win in Trofeo Lloseta Andratx back in January. He’s been near the front on a couple of the stage so far but he is most at home at the head of the race in a break. Like a lot of pro riders this is his “home” race, will that be an advantage?

The ambitious Aussie was ever-present in the breakaways during the Tour of Oman and it’s surprising not to have seen him up the road here so far. A former Tour de l’Avenir stage winner, the Caja rider is hoping to take a step up in level with this season being his second in the pro peloton but also because he completed his first Grand Tour (the Vuelta) in 2017. If he makes the break, he could benefit from the rest of his companions not knowing much about him!

Most teams to get a rider in the break and it stays away.

I’ll go with Schachmann to time trial his way to the line! 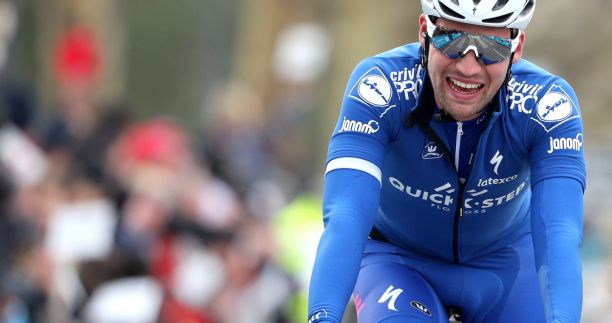 Thanks as always for reading! Who do you think will win tomorrow? Will the break make it or will we see a bunch gallop to the line? Anyway,