Not as an explosive day as it could have been as the wind decided to not play ball. Instead, it was a long afternoon in the saddle for the riders as they headed towards Valls. A combination of Movistar and Mitchelton Scott pulling the front of the race on the final climb saw a fair amount of riders distance with only 90 or so guys heading to the sprint together.

For a while it looked as if blog pick McCarthy was going to take it but he was out of position with 600m to go and working to regain those lost positions eventually cost him when he opened up the sprint. Impey looked like he then had it but as night follows day, it was Valverde who took home the win! 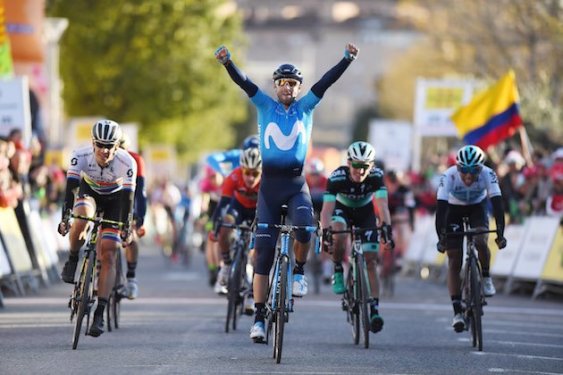 The result puts him in the GC lead ahead of tomorrow’s stage so let’s have a look at what is in store for them.

Well, it was nice of the organisers to change the route at just after 6pm UK time. Bit annoying as I had the majority of this wrote for the original stage route but oh well, at least it is better than them cancelling/changing the stage in the morning.

So apologies if this preview is a bit more blunt than normal but I don’t really have the time to re-write everything in massive detail and at the time of writing now I’m going off of limited info.

The Cat-1 climb of Bracons is fairly tough, especially in the closing 5kms but it comes too far from the end of stage to be of any real impact.

Port de Collabos is pretty much just an extended version of what we had at the end of today’s stage with a manageable average gradient of 5.3%. However, it is the 7.3km in length that might see the end of more riders than today.

Once over the crest though the road continually rises though, although it is pretty much false flat, all the way to the finish line. There is a bit of confusion as to where the exact finish line is and I’m really struggling to see anything on a very grainy picture that is floating around on Twitter. I trust the judgement of Ricky and Raffele though from LasterketaBurua who say the following…

Which would then make the final 1.5km look something like this on the road… 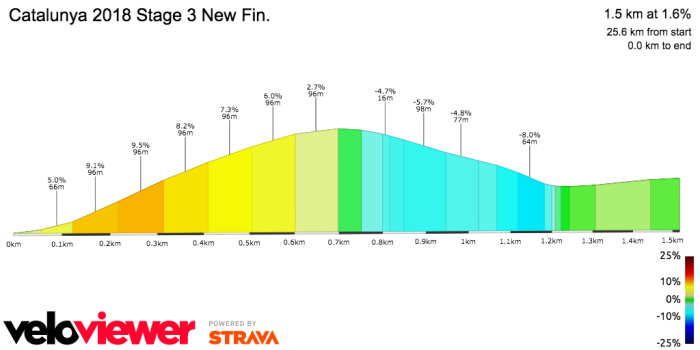 700m at 6.6% to act as a launchpad before a very quick final kilometre and fast sprint to the finish.

In all seriousness though Movistar have the firepower to try to keep control of the race in the closing stages and we all know what Valverde is like on these types of finishes. However, there is a chance for other teams but they need to be bold and go early. If they can get rid of as many Movistar domestiques as possible on the Collabos climb then attacks have to fly over the remaining 13km to try and wear the strong Spanish outfit down even more. The unfortunate outcome with that situation is that Movistar can just counter it by sending Valverde/Quintana/Soler into any dangerous move that tries to go.

I’ll throw a few names into the hat here to look out for. 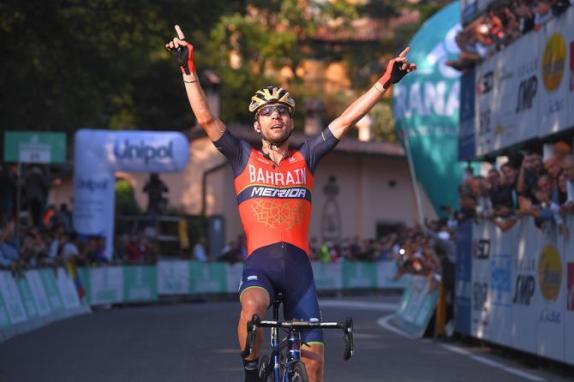 Was climbing well in Strade and he won’t be seen as a massive threat for the overall. He does pack a bit of a punch in a small finish so he might fancy his chances in a splinter group that forms at the head of the race.

McCarthy will hope to hold on for Bora but they do have another option in the shape of the strong Austrian. He’s raced sparingly so far this season but he has impressed on almost every occasion. An attacking rider, we might see the Austrian champions stripes at the head of the race in the finale.

Why not make it two previews in a row that I mention the Astana rider?! The longer climb beforehand should see more of the fast men distanced and in theory that makes it easier for him in the sprint. Astana should have Chernetckii, Hirt and Bilbao at least in the front group so I can see them being aggressive in their tactics. I’ve stated numerous times before that the little Spaniard packs a good kick, time for him to deliver?

We could also see a breakaway make it all the way to the line but given the easier stage I think a few teams will fancy their chances in a sprint. Movistar will no doubt want to keep things close for Valverde to try to gain more bonus seconds.

I really should say Valverde here but I think we’ll see some attacking racing on that plateau after the final categorised climb and a small group will escape as long as it features at least one Movistar and Mitchelton rider.

In the end we’ll see a surprise victory from Mühlberger! 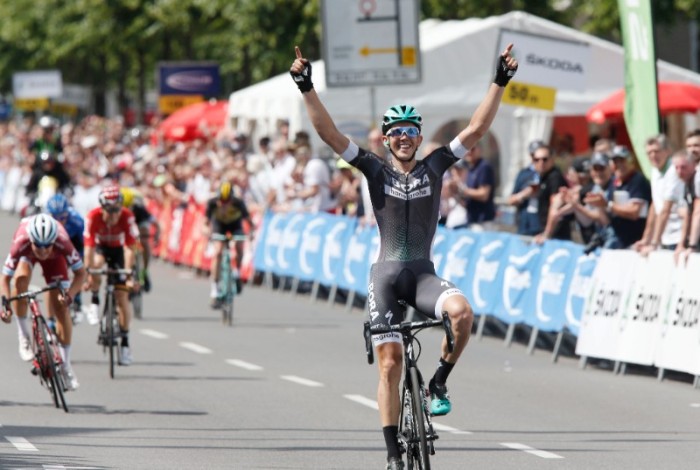 Or Valverde wins as usual. That’s what is going to happen, isn’t it?

Thanks as always for reading and once again apologies for the slightly shorter preview but I’m lacking the time to re-write everything fully. Who do you think will win? Anyway,