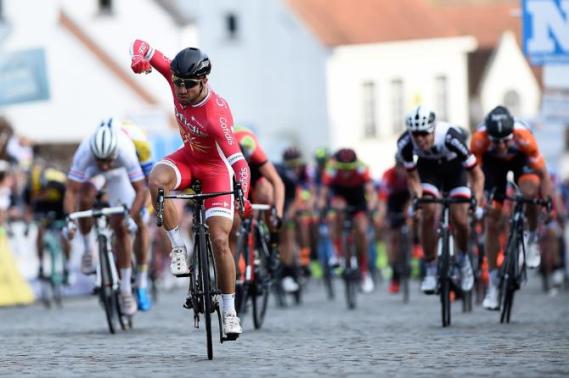 He’s not here to defend his title though so we could well see a new winner but let’s have a look at what is in store for the riders.

After having reduced bunch sprints in the majority of recent editions, the organisers have decided to change-up the route a little.

We still have the same little kick up the Nokereberg to finish but the circuit that they used to do at the end now makes up the middle part of the race. Instead we have two longer final laps that make the race even more “cobbled” than before; meaning there are a total of 22 cobbled stretches throughout the race!

I’ve made a profile of that circuit that you can view here.

Within the final 10kms of racing the riders will face 2900m of cobbles. The first of those is the cobbled climb of Lange Astrstraat which averages 5.6% for 480m. Possibly a place for those with a bit of a kick to launch an attack.

Only a few kilometres down the line and they’ll face the longest stretch on the course; the 1.8km long Huisepontweg.

There’s no pavement for riders to hide on here and with the pace being pushed on at the front, I expect gaps to be made. Furthermore, not long after that section another smaller one follows as they once again head off of the main road onto these narrow cobbled farm tracks.

The Kouterstraat is only short at 300m but the cobbles look the gnarliest that the peloton will face all day and with only 4.4km remaining once they have traversed the section it will be a fight for anyone to try to organise a chase.

We then of course finish with the slight rise up the Nokereberg (5.7% for 350m) to finish.

It looks set to be a dry day which will please many and there is only a fairly light wind of 20km/h but we could get some stronger gusts.

It’s unlikely to cause any echelons but you never know with Belgian racing. Teams certainly like to be aggressive!

Putting this out there now, I don’t think we’ll see a reduced bunch sprint.

The change of route  with the amount of cobbles in the closing kilometres will make it a lot more selective. We might get a very small sprint of 8 or so but I can’t see a group of many more arriving together. There are numerous points to attack in the closing 10km and not a lot of straight wide roads for a chase to get organised. In fact, the chase can really only get organised in the final 4km and it will be a tough ask to bring a motivated attack back by then.

So the following riders will be contenders based on the above assumption!

I’m not going to make this list too exhaustive, plenty of riders could win in the right situation and circumstances so with that said 4 riders to look out for are…

If a late attack sticks, a Quick Step rider will need to be represented. They don’t have any of their big stars but they still bring a very strong squad for this type of race. Cavagna recently won the Dwars door West-Vlaanderen after he was part of a successful 3-rider breakaway that held off the peloton. He’s clearly in form at the moment and is a rider that should suit these one-day Belgian races. A good time trial rider, he packs the power to get away and hold the gap. Can he go back-to-back?

BMC bring an attacking squad with them to this race and I expect to see them active at the head of the race throughout the day. Vliegen is another like Cavagna who is a talented youngster and I think he’ll step up another level this season with this now being his third year in the senior peloton. Plus, he completed his first Grand Tour last year which always gives a rider a boost. He has the pedigree in this field to compete on courses like this and I’m sure he’ll stick his nose in the wind at some point.

Possibly not the first rider to spring to mind but the Dane seems well suited to one-day cobbled racing. He’s a strong guy with a fairly solid sprint so he could mix it in a small sprint. 2017 was a bit of a tough introduction to World Tour racing for him but he did manage a few good results in .1 races (Besseges and Kolm). Like BMC, Katusha bring an attacking squad and I don’t think they’ll settle for a sprint.

The only Pro-Conti rider to make my very, very short-list, he was disappointed to only finish 6th in Le Samyn. Nonetheless, coming 2nd then 6th in the last two editions of that race highlight the quality of rider that he is. I think he is sometimes too eager to go on the attack but if he bides his time tomorrow then he has a chance. That will increase even more if some of the WT riders underestimate him!

We’ll get a fierce pace on the final circuit that will ensure we don’t have the favoured (by the bookmakers anyway) sprinters competing for the win.

Instead, a late attack by Loic Vliegen will see the BMC rider secure a great win. He’s a bit of an all-rounder which perfectly suits the closing 10 kilometres.

We have prices here in the UK with SkyBet but Bingoal also have odds up for the Belgians. I imagine Kirolbet will follow soon. The following prices are for SkyBet though…

Given the fairly open nature of the race, I’m happy to spread quite a few points across my 4 named riders above so 0.5pt EW on them all;

Thanks as always for reading! Who do you think will win tomorrow? Will it end in a sprint or will the attackers get their chance? Anyway,