Italian Cup racing kicks off this weekend with the 55th edition of the Trofeo Laigueglia. It is a race I have grown more fond of over the past few years as it always produces some exciting racing but I imagine many of you won’t care for it too much. Does that make me a “cycling hipster”?

Last year’s race was won by a fantastic Fabio Felline who rode away from everyone on the last major climb of the route and wasn’t seen again by the peloton, taking the day with a 25 second margin.

A small group then sprinted for the minor places with Hardy beating Finetto to second place.

Will we see something similar this year? Let’s have a look at what is in store for the riders.

After years of changing the route for almost every edition the organisers have stuck with the same course in the past few seasons although they have made one minor change for 2018; one extra lap of the closing circuit. Now this might seem like much but a 200km, quite climbing heavy one-day race this early in the season certainly could throw a few cats among the pigeons.

The early climbs of the Paravenna (6.8km at 5.9%) and Testico (16.4km at 2.9%) won’t be decisive but they’ll certainly sap the legs of the peloton. I’m thankful for the figures on the profile above as trying to find the length/gradients of the latter climb was a real ball-ache last year…

Moving on, the crux of the race is the circuit that we have around Laigueglia itself. 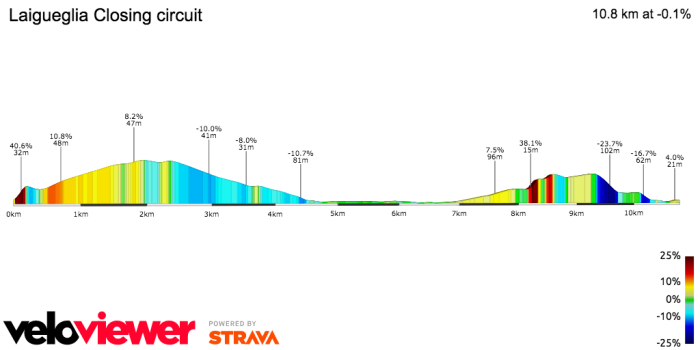 The toughest part on the course is the climb of Colla Micheri and that is the point at which Felline launched his successful move last year.

Averaging almost 8% for 2kms it will be attacked at a ferocious speed. Not long enough for a pure climber to make a difference, it certainly suits a puncheur that can hold a good amount of power for the 5 minutes it takes to get up it.

A fast descent follows before a few kilometres of flat and a final little kick up Capo Mele. It’s not a tough climb averaging only 3.5% for 1.9km but there are a few steeper ramps that can act as a launchpad if riders are stalling and looking at each other; just like Fedi did in 2016!

Once over the crest of Mele it is only 2kms to the line. Will we see a sprint or a solo winner?

For a .HC race it is a shame to see only one WT squad arrive here considering we had four last year. I guess that’s the impact of having smaller teams etc.

Anyway, we still have plenty of exciting riders here who should make this a good and competitive race to watch.

One team stands out above the rest in terms of quality and options in their team; Androni.

I imagine that Cattaneo or Gavazzi would be their go to riders here. The former really took a step up last year and started to deliver on the promise he showed when winning the Baby Giro back in 2011. He seems to go well on the short climbs and would hope to be in with a chance of contending for the win tomorrow. The one issue is that he currently seems to be a nearly man, albeit a consistent one, as he only has one pro win to his name thus far despite a string of strong top 10 results last year. I would expect Gavazzi to make the finish tomorrow if we don’t see any crazy attacks on the climbs. Although saying that, the Italian was very impressive in the Tour of Turkey’s Queen Stage last year so who knows. He has a good chance of winning a reduced sprint.

If neither of those guys are firing then Androni still have to potential other cards to play in their squad with Torres and Masnada. Both put in respectable performances in San Juan but it was Torres who looked the best on the climbs there. You would think 2km at 8% would be too short for him to ride away from everyone but I wouldn’t be surprised to see him do just that.

There are plenty of other riders though who will hope to break the theoretical dominance I’m granting Androni. 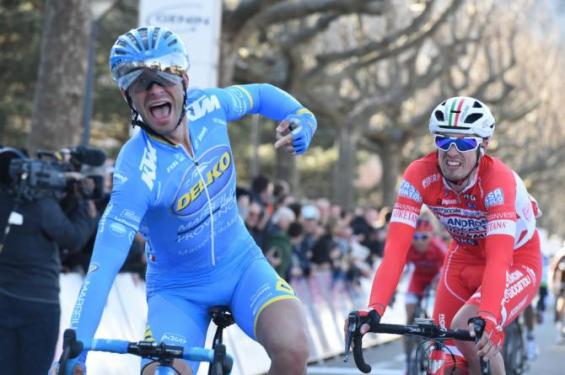 A classy bike rider, the Delko rider always seems to feature at the finish in these types of races. He can climb fairly well and sprint fairly well which is always a good combination to have! Now into his second season with the French team, he’ll be more comfortable with his surroundings which should help him out a lot. Delko as a team have had a great start to the year and they’ll be wanting Finetto to continue that here.

Arguably the “quality rider” in the Laigueglia peloton, the Italian moved to Trek over the winter period. He performed well on his debut with a solid 4th place in Mallorca. If he continues that here then he’ll be a tough rider to beat as he should be able to out-climb most here. Riding for the Italian National Selection means he won’t have much help so will have to rely a lot on Moreno Moser who himself is a winner of this race in the past. The Astana rider was plagued by illness last season but hopes to put that beyond him this year. He was going OK in Valenciana so he should stay with Brambilla for a while or he might even be a dark horse to watch out for as well.

On his first outing for new team AG2R, I’m intrigued to see how the Swiss champion goes on a course like this. His climbing improved a lot in 2017 and he managed to pick up a Giro stage on steep kick to the line. A lot like Finetto in some respects, he seems to be able to climb fairly well but he also has an explosive kick. I think he’ll surprise here.

2017 was a breakthrough year for the talented Frenchman as he took three wins throughout the season along with completing his first Grand Tour. He should be even stronger this year because of that. There won’t be many riders here who are better on the climbs than him and I’m looking forward to him attacking at some point. He started his season off with a solid 5th in Marseille so he must have some good early-season form. Keep an eye on him!

Nippo’s only real chance of winning this race, Canola also had a good 2017 taking 6 wins. Admittedly, 4 of those came in Japan so the level of competition was slightly lower, but a win is a win. He’ll potentially go missing on the climbs, but if things are taken easy after and there is a regrouping of around 15 riders then he has a great chance of winning a sprint.

The Belgian rider always seems to start the season well and he produced a solid result in Valenciana where he finished 11th on GC. He’ll lack any real support from his team late on in the race, but he might sneak into the race winning move. I’m not sure if he’s explosive enough to take hom the win though.

The cream to rise to the top and Brambilla to win in an almost deja-vu scenario for last year where a Trek rider on the Italian National Team takes home the spoils!

Watch out for Dillier as well though, I think he’ll go close.

Thanks as always for reading! Who do you think will win tomorrow? The race itself will be shown live on the PMG website I think, so we should be in for a nice afternoon of racing. Anyway,

Those were my Two Spokes Worth.