We got the expected sprint finish into Peñiscola with the lead-out trains battling it out on the run-in.

It was Lotto Jumbo who came out on top, delivering Van Poppel excellently into the home straight. He did have to start his sprint ever so slightly earlier than he would have liked, but the Dutchman showed enough power to hold on for the victory.

Mezgec looked as if he was going to come round him at some point but he just couldn’t manage it, nonetheless, he held on strongly for 2nd. Roelandts came home third, pipping a few other riders in an almost blanket finish for the minor places.

Will Van Poppel be able to hold onto his lead tomorrow?

Let’s have a look at what is in store for them.

A really interesting stage that could cause a GC shake-up.

Five categorised climbs jammed into only 155km of racing makes this stage a stern test for the riders given how early into the season we are.

I can’t see the opening 4 climbs have any major impact on the outcome of the stage, but they will definitely wear down the riders legs for the second half of the day.

The focal point of the stage though is the climb of El Garbi. 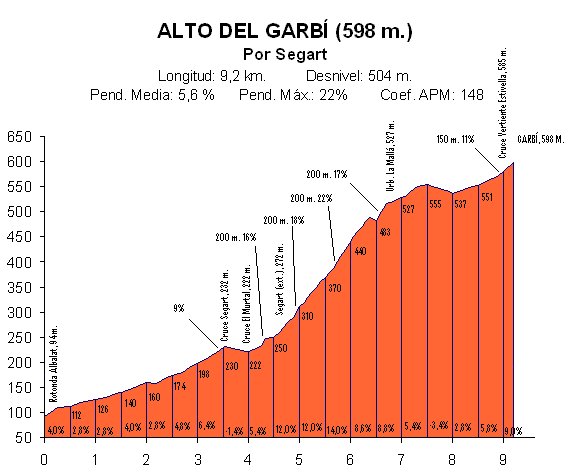 This was the climb that Alberto Contador used to decimate the peloton on stage 6 of last year’s Vuelta, with only a select group of riders making it over the crest with him.

Unfortunately he’s not here so it will be interesting to see if we have the same aggressive racing.

The climb as a whole averages only 5.6% for 9.2km, which in the grand scheme of things isn’t too difficult. However, it is the almost 3km section at pretty much 10% where the real damage can be done.

Riders will be all over the road if someone attacks this one aggressively. The key word being if.

Once over the crest, the riders will descend for almost all of the remaining 30km into the finish town of Albuixech. It is not a descent where you can free-wheel on though, as the percentages only max out at around -5% or so. A strong and organised group could gain time on others here.

I’m really hoping for some fireworks on the Garbi. I have a feeling we might see Valverde try to light it up to reduce the group down significantly to 8 riders or so. However, the issue with that plan for him is he might be left with very few team mates and that then leaves the door open for Sky Harlem Globetrotters to attack him from all angles.

The stage is similar to the opener in Andalucia last year that Valverde won from a group of 7, although the final descent that day was 10km shorter.

Instead, we might see a slightly easier pace, where a group of 25 riders crest the climb together.

Same rules still apply though and attacks will go off the front and we could then see a splinter group make it to the line. As to who makes that group, your guess is as good as mine but one thing is for sure, they have to climb well!

As I’m short on time, I’m just going to throw a few names into the hat so the list isn’t going to be exhaustive.

Well, maybe not all of them. Seriously though, everyone on their team apart from Kiryienka and Stannard could win this stage given the right situation. I think they’ll try to make the pace hard to reduce the peloton as much as possible, isolating other riders. The old 1-2, will be turned into the old 1-2-3-4-5 as they constantly send riders up the road on the run-in. Take your pick for them, I’ll go with a lively Diego Rosa.

The AG2R man had a great end to 2017 with a very respectable 4th place in Il Lombardia. He copes well on the steep gradients and if the pace is not pushed too hard, then he’ll hope to make it over with the main group. If the race splits up from there, he won’t be marked too much as Ag2R won’t be massive threats in the TTT so he could slip away. Furthermore, he packs a solid sprint from a reduced group so he could challenge that way.

I’m a big fan of the Spanish rider and it was great to see him really take a step up in level towards the end of the Vuelta last year. This season he’ll no doubt be working for his leaders at some point, but this is the type of race where he might get leadership in. If he’s climbing like he did in the Vuelta, he should be able to follow the front group. Packing a punch, he could be a threat from a reduced sprint.

I’m intrigued to see what the new Movistar man does this season and I think he’ll have a lot of expectation on his shoulders at this race to help Valverde. He’s a strong climber but is still a bit raw so to speak. Anyway, while everyone has their eyes firmly on El Bala, Roson manages to slip away in the closing few kilometres. He has a bit of kick to his sprint but I’m not entirely sure the flat run-in will be ideal for him, nonetheless he has a chance in a very tactical finish. Or he just works tirelessly to keep everything together.

A climbing selection to be made on El Garbi and it all to kick off from there. I think we’ll see a counter move go and a small sprint to the line of about 5 riders, with a group of 20 or so coming in not so long after.

Vuillermoz to take the day!

There is absolutely no season long fantasy league bias here at all. Ok. Maybe there is a bit…

Thanks as always for reading and apologies for the slightly truncated preview. I’m looking forward to what should be an interesting, tactical finale tomorrow. Anyway,