We did get a fairytale ending after all, with Contador winning the stage atop the mythical Angrilu.

It was a classic performance from the Trek rider as he put on an aggressive climbing masterclass. He certainly will be missed as a rider, especially as his type seems to be disappearing over the past few years.

Sky put on a dominant display behind, with Poels and Froome finishing on the day’s podium. The result means that barring anything incredibly bizarre happens tomorrow, the Brit has won his first Vuelta title.

It makes him the first rider to win the modern Tour-Vuelta double, and the first since Pantani to complete a double. Quite remarkable!

I bet Froome’s parties aren’t as good though…

With the GC battle over, it is time for the sprinters to have their time in the spotlight tomorrow.

I could go on and pretend that there is more to this stage than meets the eye but in the words of Skepta; “that’s not me”.

We could see a late attack stick if some of the sprint teams mess around with the chase duties. Modolo and Lampre (UAE) are here so a Giro cock-up could always be on the cards.

But no, it will be a processional stage followed by a sprint. Simples. 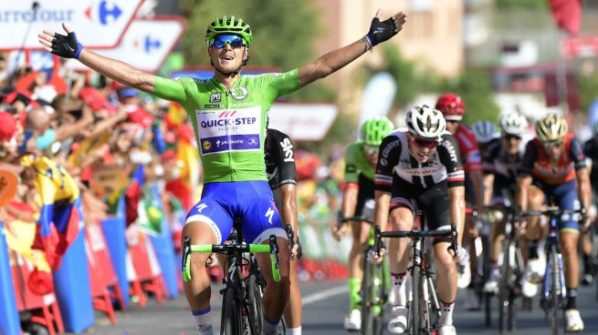 The best sprinter here so far, he also has the added incentive of trying to win the Green jersey too. However, tomorrow’s easy run in looks the least suited to the Quick Step rider who would prefer a trickier finish. Nonetheless, the form is clearly there so he most likely has to start as favourite.

Sprinter turned key hilly domestique for Contador over the past few weeks, the Belgian has performed his duties ably. Will the favour be returned tomorrow? Most likely! He is fast and with De Kort to guide him into position, he’ll be a threat.

Has been a bit meh recently but can’t be discounted in this field. He does seem to go well at the end of a GT.

The final sprint stage and the first day that the Dane will get a chance to go for the win. He took this day last year so I guess he has some course form. He made the break on a few of the more rolling days so his power output must be fairly solid. A dark horse?

Could Aqua Blue get two wins this Vuelta? Blythe isn’t the fastest sprinter in the world, but in this field and at the end of a Grand Tour then we do often get surprise results.

Van Asbroeck and Lobato will be in or around the top 10 too.

A dangerous day for those near the top of the table but thankfully Degenkolb isn’t here to ruin anyone’s chances on the last stage.

Pretty self-explanatory; has some form and will be near the head of the results.

Not tested in the sprints at all this race but he does have the speed to contend.

Should be doing some work early in the day.

Apologies for the really short preview but the Vuelta has worn me down and my enthusiasm for stages like tomorrow is limited enough anyway! Thanks to all of you for reading every day and interacting on Twitter etc. Helps me to keep going through several break days in a row. The season is nearly over but I’ll be back previwing the World’s in no time!

If you’ve enjoyed the previews and want to thank me (cheeky of me, I know) then a beer would be more than appreciated – Buy Me A Beer. But hey, if you don’t ask, you don’t get!

Those have been My Two Spokes Worth.