Once again the breakaway stayed away to contest the stage. I really thought that some of the other GC teams would chip in and help Sky chase but it was not to be! As much as I love a breakaway, it is going to make the remaining two weeks long in terms of preview writing. Although I guess we can view it as getting to watch a race on two fronts, if we’re trying to be positive about it all!

Majka and Alaphalippe were the strongest riders on Xorret de Catí in the break, but they played a very tactical game; constantly stalling and then attacking. This allowed Polanc to come back on the descent but in the end, the outcome was inevitable in a sprint finish to the line. 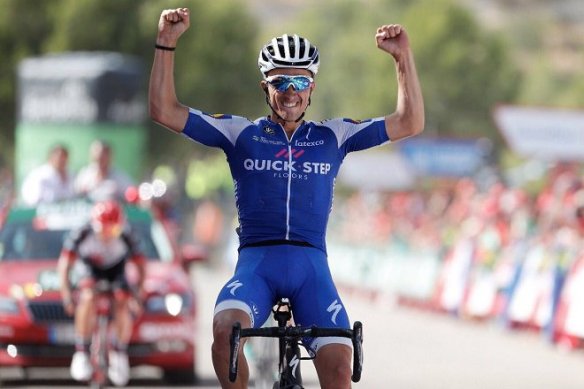 The Frenchman won the stage with Polanc pipping Majka for second.

Behind, Froome made his way up the GC group on the climb and ended up dropping everyone except Contador, with the Trek rider regaining contact just as they crested. While their attacks were strong, they only gained 17 and 28 seconds on the majority of their competitors. It leaves the top 5 within a minute of the race lead, with all of the top 10 less than 2 minutes behind Froome.

Plenty still to play for as we head into our final stage before the first rest day.

The riders won’t face many difficulties in terms of terrain tomorrow apart from the Alto de Puig Llorança. Although with this being the Vuelta, a fairly flat day still has almost 2000m of elevation gain.

On their first passage, they’ll almost complete the full climb but continue straight on instead of turning off.

Used back in the 2015 Vuelta, tomorrow’s route is pretty much a carbon copy of that route.

Dumoulin won that day with Froome second, will the Brit go one better tomorrow?

With the stage travelling along the coast, I had high hopes for some crosswinds and echelon action.

However, that doesn’t appear to be on the cards. We will get some crosswinds at points on the route, but at only 12km/h or so, I can’t see them being of any effect.

There will be a headwind in parts too tomorrow which could be bad news for the break. Although that was apparently the conditions they were facing today and that didn’t hinder their motivation and ability to fight out for the stage.

As mentioned above, I was shocked that we didn’t get a team like Trek help Sky chase down the break so that Contador could go for the stage win. I guess in the long run it is a good tactic, as it will wear the current leader’s team-mates down; with the aim of hoping to benefit from it later in the race.

I also thought Sky would want Froome to get a stage win, but they seem fairly content at doing the bare minimum to retain the jersey to counter-act the tactics employed by the other teams (see above point). Maybe they’ll hope he’ll take the TT? We can’t have a Tour-Vuelta winner not take home a stage in either race!

Nonetheless, tomorrow will be probably be a rinse and repeat of today’s stage.

Big fight early on to get into the break -> assess who is there -> no one of real danger then Sky will let the gap grow -> no other team takes up the chase with them -> race on two fronts.

Time to play that game. Again.

The issue with tomorrow’s stage is that the first part of the race is conducive for a completely different rider to make the move compared to one who would excel on the final climb. Well, traditionally that’s how it is!

With the flat start we should see a lot of strong men in the peloton make the move, with a few more natural climbers littered in the mix too.

Tactics will then important as there are almost 40kms from the summit of the first passage until the foot slopes of the final assault. We could well see a situation where someone attacks from further out and holds on a la Lutsenko.

Strong in Burgos recently, the Caja rider was somewhat in GC contention a few stages earlier so would never have been allowed much freedom to go on the attack. However, he now sits at 5 minutes down and should be given a lot more leeway. A punchy climber who should be able to cope with this type of ascent. He packs a fast sprint at the top of a climb which could see him take the win! 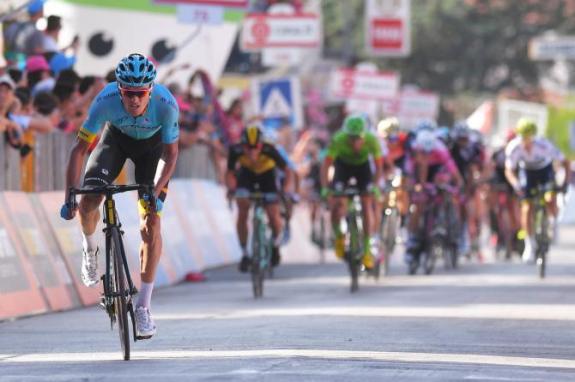 The term “pissed off” was probably an understatement as to how the Astana rider was feeling after his complete miscalculation on Stage 6. The legs are clearly there but he’ll have to more astute this time around. A rider who fits the bill of “good rouleur but strong on the climbs” perfectly, I’d be surprised not to see him up the road tomorrow.

He was Orica’s 4th rider in the top 16 at the close of yesterday’s stage, but an untimely puncture at the bottom of the final climb today saw him drop way out of contention. Orica have been relatively conservative in terms of their tactics so far, not even making it in the break yet. But with their triple threat not firing on all cylinders, they might have to change things up.

Arguably the strongest rider in the break on the final climb Stage 5, it is a shame he started so far behind Lutsenko. He’s stuck with the GC group the past few days and he even put in a couple of digs early on the climb today. His form seems to be on the up and if he comes to the climb in a group then he will be tough to beat on the ascent!

Same logic as for today’s stage, pick someone who will be finishing near the front of the GC riders and forgot about a possible break win. This also applies to those who are hoping to play it more conservatively for the KOM competition.

Once again, same as today. Be bold, chase those stage wins and let me win that KOM prize 😉

Name in a hat.

Orica to be attacking and Haig to take the win! 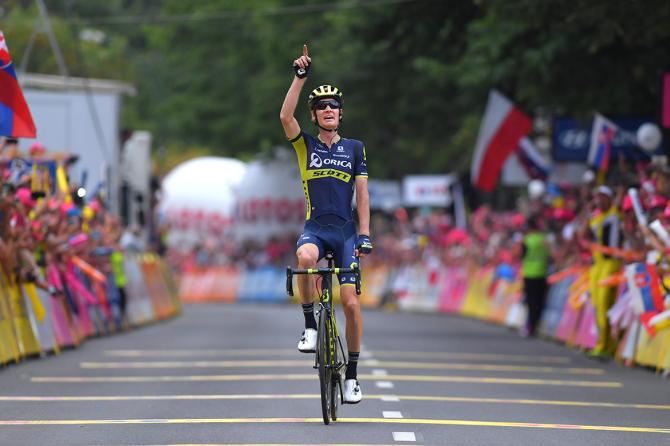 With the way that Orica are riding just now, they are on course for a bit of a “close but no cigar” Vuelta. Chaves/Yates/Yates aren’t cuasing Froome too much concern at the moment. The Colombian is doing well sitting in second place, but he seems to almost be content with a podium and I can’t see him taking any leaps forward tomorrow. Hunting for a stage win and getting it will take the pressure off the team and the confidence could help their leaders. Haig himself was very impressive in Poland, taking his first ever pro win. He was an exceptionally talented junior and it seems to have now translated into his professional career. Will his first win soon be followed up by his first GT stage?!

Thanks as always for reading! Who do you think will win tomorrow? Will we once again see a break make it all the way? Anyway,