An eventful day, although not as eventful as I thought it might be!

In the end though, we had an elite group of riders escape towards the end of the stage. Some missed out originally (Keukeleire / GVA / Gilbert / Greipel) but managed to bridge across not long after.

However, there was no real co-operation in the group with around 6kms to go, resulting in a flurry of attacks.

Vanmarcke tried his luck with 1.5km to go or so but it wasn’t the best timed move. Not long after his acceleration he had to slow down for a sharp, technical turn. This gave Sagan, arguably the best bike handler in the peloton, a relatively easy chance to close him down.

Almost instantly though, Boom counter attacked and that was that. Sagan, who by this point was fed up with doing the donkey work, just sat up to let others chase. Wellens came to the front but it was too late. Boom took not only the stage win but also the GC lead as well!

Sagan sprinted to second with Van Avermaet taking some bonus seconds in third.

It leaves the GC race still relatively wide open with the top 10 only separated by 36 seconds. Let’s have a look at what’s in store for them tomorrow.

Another rolling day in the saddle but in Liege-Bastogne-Liege country this time.

At 204km, it is the longest stage of the race and it will certainly tire the riders out. The climbing today was a lot more frequent but less severe, whereas tomorrow the gradients of some of the climbs are a lot steeper, or the climbs themselves are longer.

Tomorrow does feature the longest climb of the race; aptly named Mont Rigi. However, it is more than likely too far out to be of any major significance but I live in hope we see a crazy day of racing with early attacks.

There is a chance of rain throughout the day but whether it materialises or not is a different matter. If the heavens do open though, it could make the stage more selective.

Like I’ve mentioned above, we could see some early moves from some strong GC contenders which would be great. However, the most likely place for the first blow to be landed is the Mur de Saint Roch. Averaging 9.7% for 1.3km it is certainly long and steep enough to cause some issues for the riders.

According to Cols Cyclisme the climb itself is actually 1.1km and averages 11.5% with a max gradient of 18%. Either way, it is steep!

As you can see in the image above, the steepest sections come right near the start which will seriously knock any speed out of the bunch and consequently make it even tougher. It acts as a great launchpad for the stronger climbers to launch a move to distance the rouleurs.

Once over the summit there is roughly 30km of racing left and it should be full gas to the finish!

The road rolls for the next 20km, featuring three climbs of note and the Golden Kilometre.

The placement of the Golden Km follows a similar pattern to today’s stage, with it just startting after the summit of the Rue Bois de Moines; a 1.2km climb at 7.2%. With the GC being decided by seconds, I’d be very surprised not to see some of the overall candidates go for the bonuses.

The following two climbs aren’t too tough, they’re more similar as to what we had today. However, after a hard days racing, they could be the perfect launchpad for a late attack. 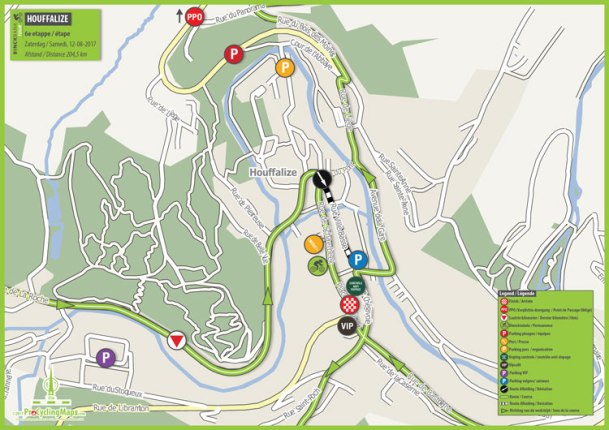 As for the finish, it is not overly technical, but the hairpin turn they do at roughly 350m out is quite tight.

Furthermore, that last 350m is uphill at an average of 5.7% according to the data on Strava. It should be an exciting finish!

I think we’ll see something similar to what happened today, but it will be selective earlier. The big moment is the climb of Rue Saint Roch and the following few kilometres. If a strong group forms there and they work well together, that could be them away for the day.

There is a chance though that we might see a regrouping in which case another counter-attack will go.

Again though, the race all depends on Sagan.

Everyone seems scared to tow him to the line but on an uphill finish like this, some will fancy their chances. If a group of 5 gets away that involves the World Champion then I think they’ll work together and wait until later into the stage to play games, if at all. However, if we have a group similar in size to today’s stage, then the Slovak will be left with the brunt of the work. Ultimately, he’ll then allow a rider up the road once he gets fed up with their lack of co-operation.

So with that being said, I won’t name an extensive list of favourites, just two riders to cover the above situations.

Unbelievable in the Spring, the Quick Step rider really has had a season to remember and arguably one of his best to date. However, he has gone off the boil a bit really. Well, a stage win in Suisse was his most recent win back in June. Truly appalling by his standards…After having to pull out of the Tour due to illness, he then DNF’d at San Sebastian. I think he is over that illness now though and should be a force to be reckoned with tomorrow. Missing the initial move of big favourites today wasn’t great, but the way he came across with some others indicates that the form is there. I reckon it was just some bad positioning that cost him initially. He’ll love the look of the rise to the finish and is one of the riders who I think will happily ride with Sagan until the sprint. Can he win it? If he’s back to near his spring form then certainly!

The strongest rider of the day in my opinion. He was the first GC rider to launch an attack and looked ever so impressive while doing it. Strong on the flat run in that followed; he covered a few of the moves (closing down a very strong Sagan) and put a probing dig in himself. Not afraid to attack and clearly in good form, I think he’ll try to go solo from around 10km out, if he’s not already tried that earlier! A former winner of this race overall, the predicted bad weather is ideal for him. He loves a bit of rain!

I’ll go for a solo winner and Wellens to take the spoils in the rain.

Thanks as always for reading, any feedback is greatly appreciated. Who do you think will win tomorrow and how? Anyway,