Another day that ended up in a bunch sprint but it was the odd one that was expected. Again, for some weird reason the peloton caught the break very early, creating an opportunity for some attacks.

Oss, Haas, Jungels all tried their hand but were reeled back in. Then as I thought might happen, Vakoc launched an attack at roughly 2kms to go. He quickly had a bit of a gap which seemed to grow as the sprint trains behind stalled. However, Paterski came to the front and sprinted all the way up the drag, catching Vakoc just as they completed the turn at the roundabout.

It was a frenetic run to the line with the riders amassed all over the road. In the end, Modolo just had enough left in the tank to hold on for the win.

A fast finishing (again) Van Poppel charged at the line but it was only enough for second, with Walscheid taking third. His second place was enough to se Van Poppel move into the GC lead ahead of Sagan, based on their stage placings so far.

Will he be able to hold onto that lead tomorrow?

A stage that actually resembles its official profile!

Nonetheless, I’ll still be using my own one as the go to.

You can view the profile itself on VeloViewer here.

The stage starts off fairly innocuous with a lot of flat roads in the opening 60km or so. However, once through the second intermediate sprint of the day the road rises all the way until the summit of the first climb; some 28km at 2.2% on average.

If I’m honest, I’m not entirely sure where the climb officially starts (I can’t be bothered to look it up again in the road book), but to me it seems to be 5km from the summit. 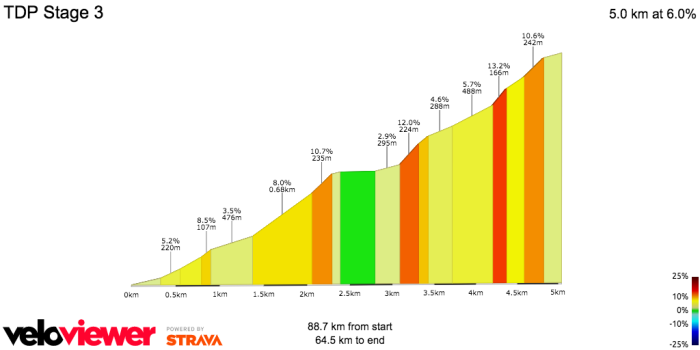 As you can see, the closing 5km averages 6% with a max gradient of 13.2%. Not too difficult but not easy either, it depends on the pace of the peloton whether we’ll see any riders dropped here.

Once over the top the riders descend all the way to the foot of the following climb; Zameczek.

Split into two parts, the climb as a whole averages 5.2% for 5.3km. Once again, not too difficult but it can be made hard. The second half of the climb is a lot more challenging than the first, averaging 8.1% for the final 2.2km.

On the first passage of the climb I can’t see there being much action here but the riders will summit for a second time with 33km left, so we might see a few probing attacks launched on the steeper slopes.

The riders will then face the penultimate climb; which is the descent off the first categorised climb they tackled. Like that first climb, I could dispute how long it actually is. You could argue the road rises from the 135km gone mark, which would make the climb 12km long at 4%. However, the opening sections most likely won’t be raced too aggressively. The same can’t be said for the latter parts though.

This is a proper climb and with the closing 4km averaging 7%, we could see some of the early GC players come to the fore.

With 9km of descent to follow, will we see any rider(s) who has escaped on the climb stay away before the rise to the finish? Well, the start of the descent is steep and technical but that only lasts for a couple of kilometres before it then runs along the side of the valley on a much straighter road.

They will descend all the way until 1.5km to go where they will make the following left hand turn and start the climb for home.

The climb itself averages 10.3% for 1.25km, however that doesn’t tell the whole story.

As you can see in the profile above, the opening 479m are a rather “leisurely” 3.6%. All hell will break loose soon after though, as the final 700m averages a leg-breaking 15% and that includes a crazy 26% maximum gradient!

I’m not even sure the streetview does it justice. Whoever wins here tomorrow will have deserved it!

It could be a really disorganised and messy stage.

The climbs are tough enough to make it a selective day in the saddle but they aren’t difficult enough so that we only see a group of 5-6 guys come to the finish climb together.

Furthermore, there are quite a few teams here with a few GC candidates, such as Sky/BMC/Bora who might decide to play the numbers game rather than control the bunch all day.

Feasibly, we could see a winning move go away on the second ascent of Zameczek if it contains the right teams and riders.

As the descent over the top of the penultimate climb isn’t too hard and doesn’t really favour a lone rider, I would be surprised if a team really pushes it on that penultimate climb to reduce the peloton drastically.

So i present two situations;

I think Situation 1 edges it.

As I’ve already rambled a bit, I’ll not be extensive with my riders in the following section!

For a bit of fun, this is who I think could possibly be in that near end of stage move (watch none of them be in it now);

*I had grand ambitions for Konrad on this stage given his climbing ability and good result at Fleche, but alas he finished 1’55 down today so that’s out the window.

I’ll highlight a couple of others I like for this stage though.

The UAE rider has had a good season so far; picking up a GC win in Abu Dhabi and a few podium placed finishes at the Giro. He was solid at the recent Tour de Suisse, finishing 5th on GC there. Like a lot of the peloton, he hasn’t raced in over a month but he’ll surely fancy his chances here as these week-long stage races are his bread and butter. He’s faired well at FW in the past which is a good indication for this finish. If he arrives in a small group his punchy nature could see him take a great stage win.

Not normally given the chance to lead a Sky team for GC, this race looks like the perfect opportunity for both he and his team to test out that possibility. With Poels also in the squad, they have the ability to send someone on the attack early and play the waiting game behind. Rosa has only had one race day since the Giro, his National Championships but I still think he can go well here. He’s a strong hilly classics rider, as was shown towards the end of last season, and tomorrow’s terrain has that type of feel to it. Can he succeed?

Thanks as always for reading and I hope you enjoyed the in-depth route analysis. I certainly enjoyed writing it! Who do you think will win tomorrow? Anyway,