An exciting stage that saw a very fast start to the day!

However, things did eventually calm down and a large breakaway group established itself. We did have two attackers ahead of them though, in the form of Landa and Fraile, but they were eventually brought to heel on the lower slopes of the last climb.

A lot of to-ing and fro-ing then occurred towards the top of the summit, on the descent and the run to the line but we were treated to a reduced sprint from the breakaway riders.

After being in front for most of the day taking KOM points, Fraile still had enough left in the tank for a very impressive sprint, beating Costa and Rolland into the lower podium placings.

Behind, there were a few probing GC attacks but nothing too serious. Although Thomas and Kruijswijk did lose almost 50 seconds to the rest of the contenders.

It was slightly disappointing not to see more GC action, especially after the crazy start to the stage, nonetheless, it was a good day’s worth of racing. Will we see a good day of racing tomorrow? Let’s have a look at what is in store for the riders.

Longest stage of the race and another “transitional” day.

A fairly innocuous stage with two categorised climbs that come too far out from the finish to be of any danger GC wise. 110km of shallow descending/flat from the final peak do offer a chance for the sprint teams to get organised and chase down the breakaway.

The run in is pan-flat and not overly technical. 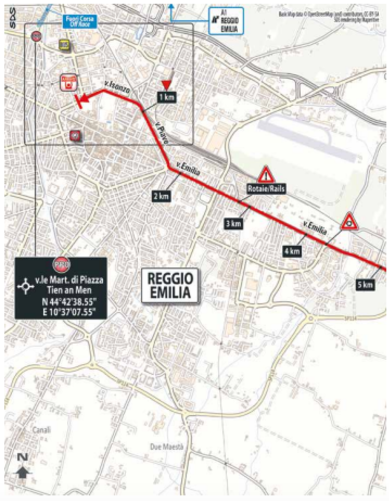 There are a few sweeping turns in the closing 2kms but nothing too serious as the road is quite wide. Unless of course the organisers decide to put some barriers in place!

You would expect it to be a sprint. There are still a reasonable amount of teams left with fast-men and with most probably leaving the race after Stage 13, they’ll want to make the most of the opportunities they have left.

The good news for sprinters is the distance from the last climb to the line, there is plenty of opportunity for their team-mates to close the gap. It all depends on how many riders and what teams, make the breakaway.

This is the Giro after all and when you consider how tough today was, a few riders might want an extra rest day tomorrow. It would be useful to know how the sprinters and their teams have recovered but I guess we’ll not find out until we start the stage!

So on a day where it should be a sprint, there is an ever so slight chance that we get a breakaway but even then it’s only a 10% (at most) chance I would say.

Looks to be a 4-horse race.

Gaviria – Already has two stage wins to his name and was electric when nearly beating Ewan to the line on Stage 7. The flatter finish isn’t ideal for him but he will be full of confidence. In Richeze he has a great lead-out rider who will deliver him perfectly. Will it be enough to take a third win?

Ewan – Finally got his stage win but the young Aussie was one of the last riders to finish today, struggling on the tough climbs. He is the rider I fear today may have taken the most out of and with a long stage tomorrow, his sprint might just be lacking at the end of it.

Greipel – Almost a definite for leaving in a few days time the German will be hoping to go home with more than the one win he has so far. His lead-out hasn’t clicked yet on the technical finishes, but with tomorrow’s stage being more straight-forward they can possibly get it right?!

Bennett – The nearly man so far, with two podium places to his name. After being placed under the Haughey curse (and being ill) he has seemed to re-find his sprinting legs and is now on the mend. Grand Tours aren’t exactly the best way to recover but I’m sure all of his competitors will be too. With a strong lead-out, he has another good shot at a podium.

Aside from those 4 it will be tough for others to win but I’m sure Stuyven, Modolo (if he sprints) and Sbaragli will all be up there vying for a possible podium or better.

Maybe even Mareczko can repay his team-mates after being dragged over the final climbs!

A dull day that is all about the last 5km and I’ll go for the most experienced sprinter to take the win after conserving energy today. Greipel to seal victory!

Unless of course the sprinters and their teams can’t be arsed and we get a breakaway stay away.

Tempted to throw a few pennies on some 1000/1 escapees on the exchanges later but that’s that.

Thanks again for reading and any feedback is greatly appreciated. Sorry that this preview is shorter than normal, there’s just nothing extra to say, a pretty dull stage. The same can be said for the following day as well! Maybe we can get a large breakaway that gets a lot of time to make it an exciting watch?! Anyway,