The break just managed to hold on and Izagirre took his first World Tour win after a battle between his fellow escapees saw Conti crash in the closing kilometre. Visconti got close to finish second, with Luis Leon Sanchez coming home in third. 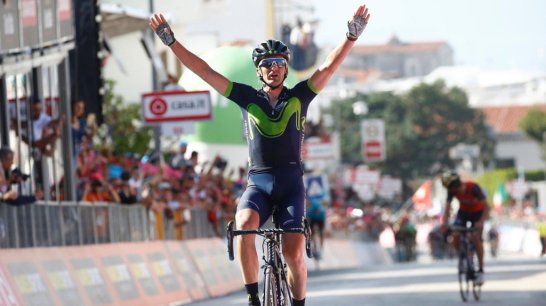 Will the breakaway riders have their fun tomorrow, or will the GC riders come out to play properly? Let’s have a look at what’s in store for the riders.

A slightly hilly but mainly flat start to the day. The stage is all about the final climb and the approach to it.

The road starts rising at 25.9km to go and if you take it from that point, then it averages a shade under 6% for the duration; that’s tough!

However, the “official” start of the climb is with 13.6km left.

Averaging close to 8.4% it is a killer of a climb. Even more so when you consider that for 8.5km it averages 9.4%! You would expect the middle section to be the more decisive part of the climb as it features the steepest ramps of the day at 14%. The closing kilometre does level out a bit so if we get a couple of riders come in together then there is a chance of an uphill sprint.

Unlike on Etna, it looks as if we will get a West/South-West wind tomorrow which means that it will be a tail or cross tail for most of the climb. Hopefully this will make for some attacking riding!

It’s really hard to tell and if anyone confidently tells you how it will pan out, they’re lying.

With there being a rest day on Monday followed by the TT on Tuesday, you would expect that the GC guys will go crazy, knowing that their team won’t have to put in any extra work until Wednesday.

Yet, we’ve already witnessed a lack of willingness to chase from the bunch.

They should have been able to claw back Polanc on Etna but there was a lot of stop-starting and I fear we might see the same tomorrow. Not to the same extent, but they might let the break drift up the road before going crazy behind. Therefore we could well see a race on two fronts.

To win the rider will obviously have to be a good climber, but with the rolling terrain at the start it might be hard for some of the really light guys to make it.

Nonetheless, I’ll throw a few names into the mix, nothing extensive.

Cristian Rodriguez – I’ll give the Wilier rider another chance on a stage that should suit him more. He was climbing with the best on Etna and as he is no threat for the overall he could be given the leeway in the break.

Matvey Mamykin – Katusha were obviously annoyed to have missed the break today and I’m sure they won’t make the same mistake again. The young Russian is surprisingly good at finding himself in the right move, but he’s failed to take advantage yet. Can he turn it around tomorrow? A big win is on the horizon for him.

Kenny Elissonde – It would be very unlike Sky to send someone up the road on a stage like this at the Tour, but it is the Giro so they might have a change of plan? With someone up the road, they can play the “we’re not going to chase” card, conserving energy behind. Elissonde is sprightly enough to win from a break, but he’s way down on GC so he is no concern for the other teams.

Natnael Berhane – Dimension Data have been ever-present in breakaways throughout the Giro, only missing out on a few stages. Berhane has been relatively anonymous so far but he wasn’t too far off the GC guys on Etna. Maybe he’s been saving himself for this stage?

The GC battle is hard to figure out, there’s been a lot of poker playing going on so far.

I’m still unsure whether they’ll chase hard behind to set up the stage win. Nonetheless, if for stage glory or not, you would have to expect the weaker TT riders to have a go to try to gain some time before they inevitably lose it again.

Yates is one that springs to mind, he’s been looking good so far. Will Quintana turn on the afterburners and just blitz everyone? What about the Sky 1-2? Landa made a probing dig today, will we see a similar situation, with Thomas sitting in behind ready to counter. FDJ did a lot of pace making in the closing part of today’s stage so they must confident in Pinot’s current form.

Of course, anyone else from the list of favourites could go well, or they could crumble. It really is an open day of racing. I’m just hoping that makes it exciting and open, not a dull and defensive day in the saddle.

As you can probably gather by now, I’m not really sure what to make of this stage! I’ll go for a race on two fronts, with the breakaway holding out for the win after getting an insurmountable lead.

Berhane to seize the day!

Another day I don’t want to get overly involved with so small 0.25pts WIN punts on each of the break candidates;

Apologies this is a bit shorter than usual, there’s not much to talk about Route-wise and I’m in a rush to get this finished. Normal service shall resume for the TT! Who do you think will win tomorrow, will it be the break or a GC rider? Anyway,