*Apologies in advance, this preview has taken the brunt of me trying to do 3 in a day so it’s fairly short and sweet!*

Can I claim that it was kind of a breakaway day? Even I think I would be pushing my luck with that one!

We had a really exciting day of which the exciting part was not televised. The peloton splintered after around 40km of racing with a group of 50 riders ahead, but second placed Froome in the group behind. The gap hovered at around a minute for a long time but the elastic eventually snapped and the Froome group rolled in 26 minutes down!

It was Daryl Impey who won the stage in a reduced bunch sprint, ahead of Valverde and Vichot. 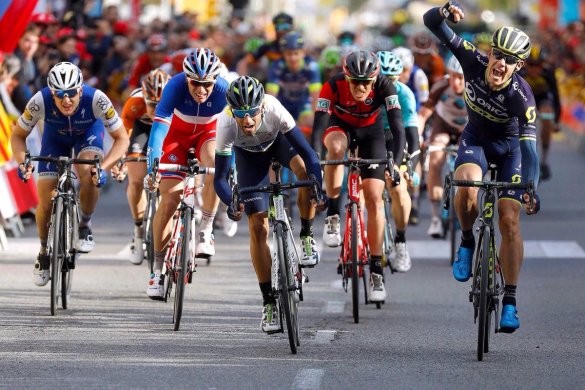 Will this have an impact on tomorrow? Let’s have a look at what’s in store for the riders.

We finish the race with the traditional circuit around Barcelona.

This stage is all about the circuit, the opening Cat 2 climb is inconsequential!

The Alt de Montjuic on its own isn’t too difficult, but when it’s repeated 8 times over 50km then it certainly takes its toll.

I’ve made a Strava profile of the final circuit that you can view here. 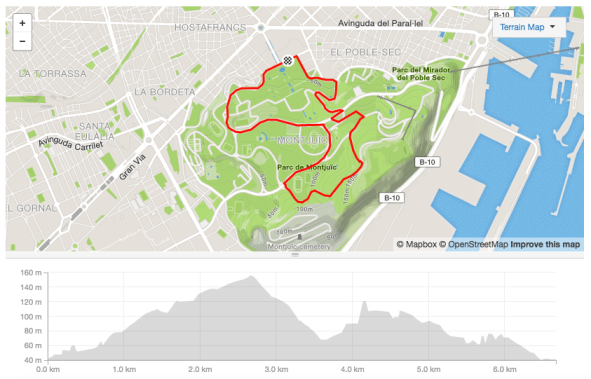 Like always with Strava profiles, you can smooth out the sudden peaks, but you get a good idea from it anyway!

The riders will mainly be either climbing or descending for the majority of the circuit so it’s a route that really favours the puncheurs. The second little kick on the course averages roughly 5.9% for 700m. So a split can be made here before the down-hill run to the line.

Last year’s race was very attacking, but that was due to the time gaps between the favourites being minimal. This year we have larger gaps but that still doesn’t mean it won’t be an attacking race!

Saying that though, Valverde is the best one-day racer out of the GC riders and he’s in the lead so it will be very hard for any one to beat him.

I think we’ll see something similar to last year where some strong one-day racers take the stage, while the GC riders mark each other behind. So I’ll through two names into the hat for that situation.

*Thankfully I didn’t start this section before today’s coverage as there were a few riders I wanted to include who were too close on GC, but now they’re not!*

The Colombian has been a great domestique for Contador this race but was caught up behind the split today. He’s now way out of contention and with his team-leader more than likely settling for 2nd on GC (after today’s failed probing attack), Pantano may be given the nod to chase the stage. Currently in exceptional form, he has a good chance of going better than the third place last year!

After their truly disastrous stage today, Sky will approach tomorrow in a typically bullish way. They’re a bit short in numbers but Thomas  is a great candidate for the stage. He is clearly in great form just now, although admitted he felt poor on the stage to Lo Port. If he has recovered from that blip, then the final circuit should be suited to his abilities. With a gap, he could be tough to bring back!

A few other outsiders I think could go well are Davide Villella and Ondrej Cink, but it will be tough to beat the other two!

If you’ve followed this blog for a while, you will know I love a tenuous reason to help my selections…

Pantano to win in front of his mum who’s following the race, and go better than he did last year!

Thanks for reading and apologies again for this being shorter than normal. As much as I enjoy writing about the sport; trying to combine writing 3 normal length previews on a Saturday and have some time to socialise is too much!

I might have something out for De Panne or Limburg, but if not it will be Flanders that I’ll be back for next weekend! Anyway,