Well that was bitterly disappointing. No fireworks, no real attacks on the climbs and a proper bunch sprint in the end. Nonetheless, that shouldn’t take away from Cimolai’s great win, as he pipped Bouhanni to the line. 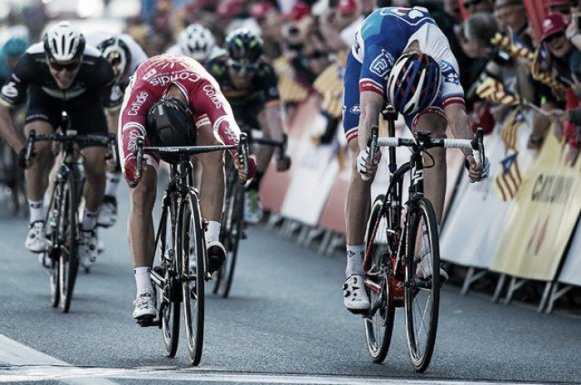 It was Sbaragli who rounded out the podium for Dimension Data.

I know I’m often wrong with my preview’s but it has been a while since I’ve been that far off. Let’s move swiftly on to tomorrow and it’s stupidly long TTT!

Long, rolling Team Time Trial that will have a massive impact on the rest of the race.

Profile once again provided by @LasterketaBurua. Although in TT and TTT tradition, I feel that I need to make my own one on Strava! So here it is, you can view it here too, for those that like something more interactive. 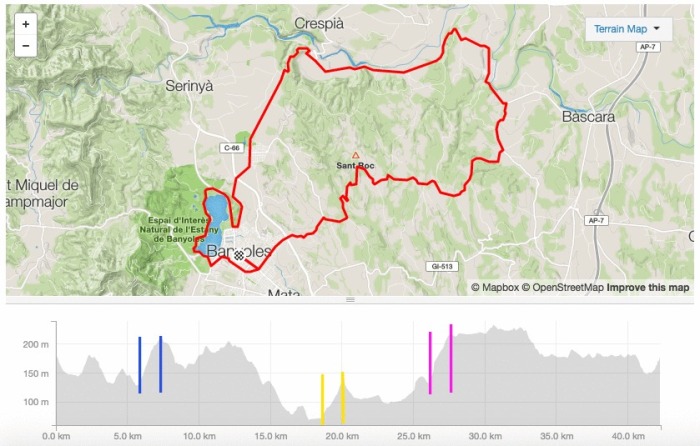 Although I somehow seemed to have gained an extra kilometre out on course compared to the official distance. I think I may have made the start/finish line ever so slightly further up the road, oh well!

The course is populated with lots of short climbs and fast descents, with rolling terrain in between. The climbs aren’t overly tough, with most of them being 1-2km and averaging 2-3%, but on a TT bike that will take its toll.

I’m very intrigued to see how the riders deal with the Carretera, considering it has ramps of over 15% and comes within the first 10kms of the stage. You don’t want the climbers blowing the rouleurs’ gasket already!

The finish line does kick up at the end but at only around 2% for a couple of hundred metres.

We hardly ever get TTTs of this length throughout the season, I mean, the World Championships in the past two years have been shorter!

BMC will be hoping to pick up from where they left off in Tirreno. 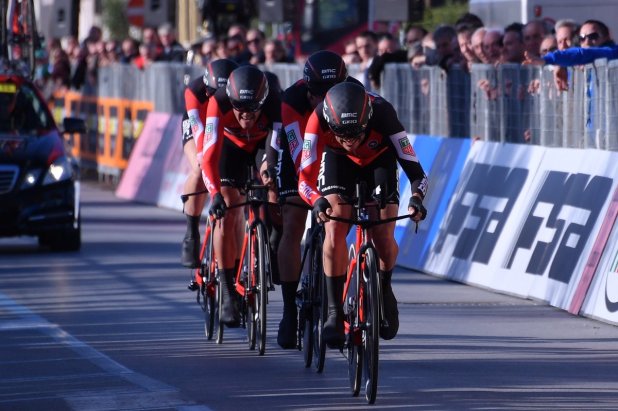 They were exceptional in that race but they don’t have their strongest team here, substituting out a few of the big guys for some climbers. On this terrain that may help but I think it will hinder them more than it will benefit them. Nonetheless, they still can’t be discounted. Watching them doing a TTT is like poetry in motion!

Sky will be lamenting me putting the curse on them for the Tirreno TTT and their wheels literally falling off that effort. They have an incredibly strong squad with them for the mountains and some very strong TT engines. The hilly parcour certainly helps the likes of Landa and Nieve who aren’t the best time trial riders. They should podium, if not win, and put their crack squad of climbers in a great position before the mountain stages.

Movistar always perform well in TTTs in Spain. They were beaten by less than a second by Sky in the Vuelta TTT last year. With Castroviejo in their team they have massive talent but the rest of the squad looks a bit thin in comparison to the one that they took to Tirreno. Will home advantage overcome that? They also have the benefit of being the last GC team down the start ramp. 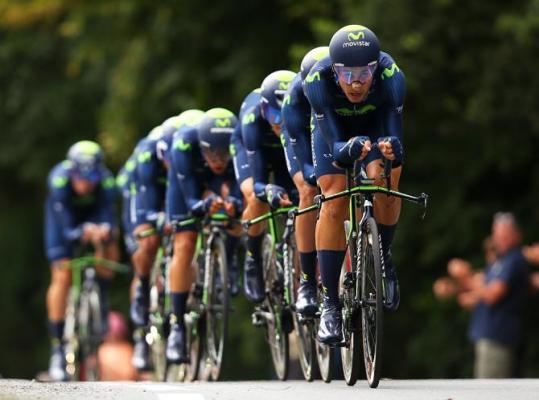 The words “Team Time Trial” would normally bring smiles to the bosses at Quickstep, but they have a very weak team compared to their top riders. I fear Dan Martin might lose a fair bit of time.

The same can be said for Trek, who on paper have some good time trialists but they aren’t notoriously a good TTT outfit. Contador and Mollema will be playing catch-up the rest of this week, which should make for exciting racing at least!

One team aside from the Big 3 favourites that I do like for this TTT are Orica Scott. The Aussie team used to be the par excellence for this discipline but they lost their way. However, they recently seemed to have managed to their fortunes around and have a very strong all-round squad with them here. I’m expecting to be pleasantly surprised by them!

It will be tough to beat one of the Big 3 and I would actually favour Team Sky out of the trio. I do think that Orica can manage a podium spot if not better! 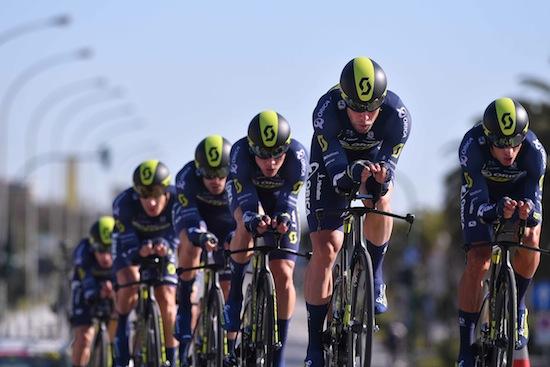 No value in the top of the order. Orica do offer a good option. 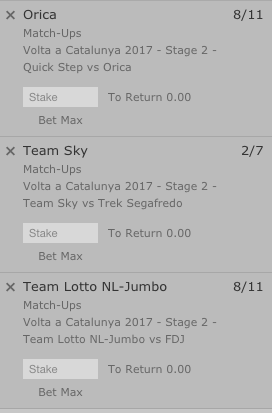 Thanks as always for reading! Who do you think will win this stupidly long TTT stage? Anyway,