An incredibly exciting stage, and I only managed to catch the final 40km. We had attacks from GC guys and one-day specialists but the peloton arrived at the finish climb together, well, what remained of it.

Much like Gary Lineker’s quote about football being “a simple game where 22 men-chase a ball for 90 minutes and in the end, the Germans win.”

Cycling is a simple sport where 180 riders cycle for 5 hours and in the end, Sagan wins! 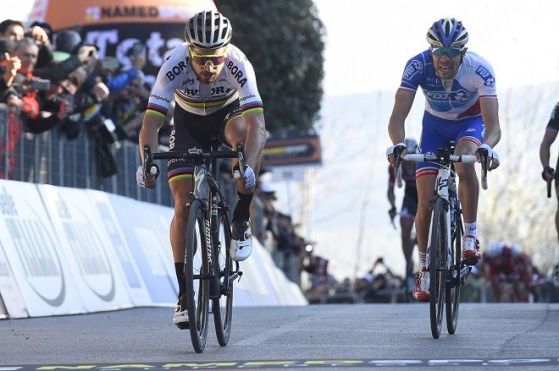 The World Champion clawed his way back to a group of GC favourites as they sat up and played games. Not exactly the best move by them! It was then academic as we got to the slight uphill sprint finish. Pinot and Roglic rounded out the podium.

What’s in store for the riders tomorrow? Let’s have a look.

A shorter day in the saddle, which I’m sure will please some tired riders. 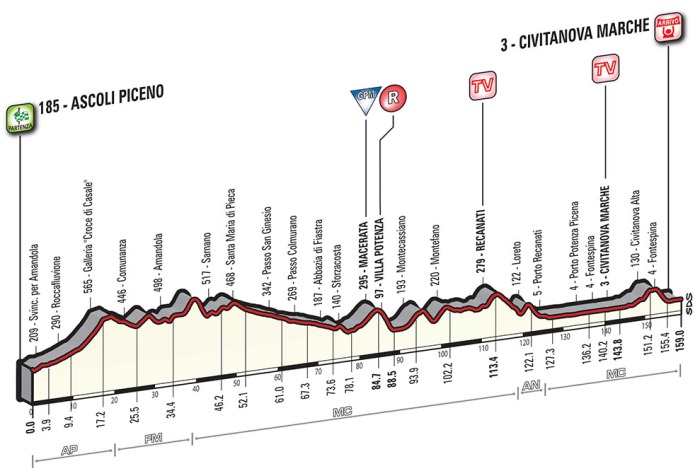 We have a lot of undulating roads in the first three quarters of the stage but there is nothing too serious for the bunch to be concerned with.

A long period of flat with around 30km to go could see the end of the breakaway, and we then have one little test before the finish. 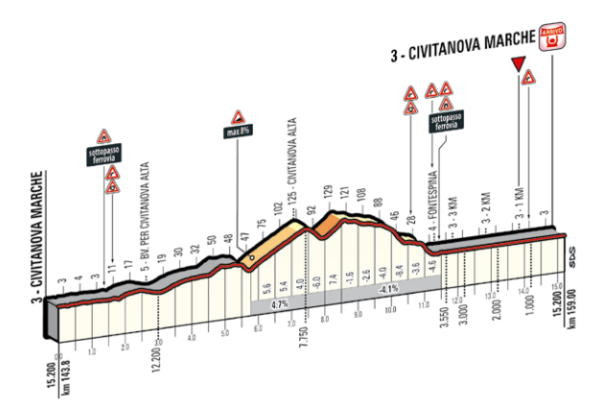 1.7km at 4.7% average could be challenging for the sprinters if they’re on a bad day, but you would expect them to hold on. However, the little descent then 500m section at 7.4% could be a great launchpad for an attack before we have a tricky and technical descent.

The pan-flat and almost dead straight finish may spell the end of any would be attackers though if the pack is organised behind.

So this will be a split preview of sorts.

On paper, this should be a sprint with it being only the second opportunity all race for a bunch gallop to the line. With the sprinters close to peak condition for Milan San Remo, they should manage the final climb as it’s very similar to the Poggio. It does come a lot closer to the finish so the battle back to the front will be a lot more difficult if you slip to the back of the pack.

Yet, after a very tough two days the peloton might want to have an easier day in the saddle. Although saying that, with it being the last road stage of the race I’m sure we’ll see an attacking day. We only have four proper sprinters here that could contend at the finish in my opinion (Sagan, Cavendish, Gaviria, Viviani) so other teams may look to the breakaway as their best option for the day. Will the teams of the sprinters be willing to work on the front all day? That’s the million pound question. In his preview with @Cyclingmole (starts around 18:10 mark) Jay Thomson sounded fairly confident in a sprint, but will that have changed after the past two days?

I think if we get representation from at least two of the sprinters teams; Bora, Dimension Data, QuickStep and Sky, then the break will stay away.

As mentioned earlier, the 4 riders listed are a class above in a field like this and you would expect them to populate the top of the standings.

In a flat sprint you would have to favour Cavendish or Gaviria. The Dimension Data rider has a very strong team with him here, capable of delivering a very strong lead-out. His favourite pilot fish Mark Renshaw is here and they form a formidable duo. If the Manxman has recovered from his illness, he has a very good chance of winning this.

We don’t really know how well Gaviria may have gone on the opening sprint after he was held up in the crash. Like DD, Quickstep have a very good lead-out train here and no doubt they’ll be the two teams fighting for space at the head of the peloton. Having Boonen as a lead-out man isn’t that bad either! Gaviria has beaten Cavendish before and I’m sure he’d love to make a big statement before Milan San Remo.

You can never discount Sagan and the little hill close to the finish puts him more on terms with the other two. He clearly is motoring right now and a third stage win is not as unlikely as it seemed at the start of the race.

I’m still not convinced by Viviani this year. He did well to get up for second on stage 3 but he’s still without a win this year and I can’t see that changing here.

I’m going to pick two guys that were in the move today, plus another. All three are similar in style but ever so slightly different.

He’s been relatively quiet this season so far, but the Brit presents the best opportunity for Dimension Data in the break. He’s exceptionally strong on the flat and short climbs and he is capable of time trialling his way to the line if he gets a gap. Of course, he’s also a good ploy later on in the race to attack if Cavendish isn’t feeling up for it. Cummings won a similar stage here last year, although the final climb was slightly tougher then. 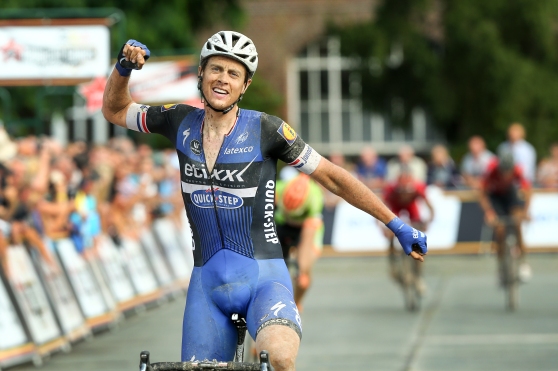 I was pleasantly surprised to see Terpstra finish so far up the standings on stage 2. He is clearly building some nice form ahead of the cobbled classics. A rider in a similar mould to Cummings, although the Dutchman is probably better on the flat, he could find himself attacking the breakaway group near the end of the stage. Managing to hold on for the win.

You can’t ignore a rider like Wellens for this stage. He is in scintillating form in this early part of the season, already picking up 3 wins. His third place in Strade highlights how versatile of a rider he is. After being involved in the crash on stage 3, he’s since lost a lot of time on GC but has been resting up at the back of the peloton, apart from a probing attack on today’s stage.  With eyes on this stage maybe?

If we get a sprint, I’ll go for Cavendish.

He has the best train here and will be hungry to prove that he is a danger for MSR!

If we get a break, I’ll go for Wellens.

Thanks as always for reading! How do you think the stage will pan out? Could be a finely balanced day, but the teams never seem to be thinking along the same lines as I am. Anyway,