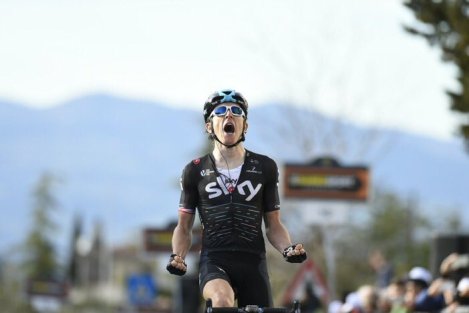 It was Geraint Thomas who managed to solo to the line, after we had a flurry of attacks at the front of the bunch in the closing 10km. The Welshman did look very strong and it could be a case of what might have been for him this week.

Another 200km plus day in the saddle for the riders, good training for MSR at least!

One of the few chances the sprinters will get in this race, so I imagine that’s what we’ll see. There are some tricky hills out there but I expect it to come back together for a bunch kick.

Therefore, it’s all about the closing kilometres tomorrow and the overall profile is a slightly deceptive one! If you just had a quick glance at the image above, you would be forgiven if you didn’t notice the little kick at the end. 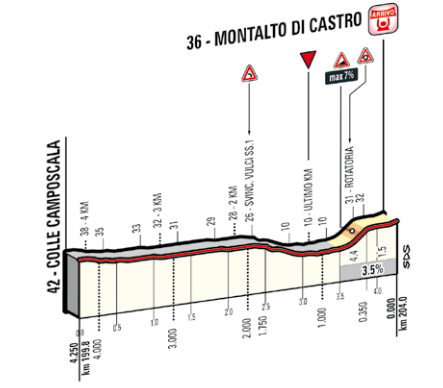 With the final 750m averaging 3.5%, it’s certainly not a straightforward sprint.

Throw in a few sweeping turns and things get a bit hectic.

So positioning will have to be important but also the timing of the effort will be key as well.

For a finish like this, Peter Sagan has to start as the favourite. The Wold Champion should cope easily with the sweeping nature of the last 1km, but the rise at the end of the stage shouldn’t be an issue to him either. After sprinting to third place today, he seems to have recovered from his sickness that saw him DNF Strade. Can anyone beat him in an uphill drag?

I’m sure Greg Van Avermaet would be offended if I said no! This type of finish looks great for the Belgian rider who is in exceptional form at the moment, which will be a concern for other riders as he will only get better going into April. He’ll be able to rely on a strong lead-out and he certainly has a great chance of winning the stage.

Dimension Data have a couple of options here but this finish will be right on the limit of Mark Cavendish so instead I imagine it will be Edvald Boasson Hagen that they will be working for. The Norwegian is in fairly good form at the moment, building himself up towards the classics. This type of power sprint really suits him and he’ll be hoping for a good result looking ahead to the rest of the Classics.

With no proper sprinter to speak of here, Trek will most likely turn to Fabio Felline as their main charge for this stage. After a disappointing performance today, I’m sure he’ll want to bounce back and bag a good result tomorrow. Not a slouch in a tough sprint, I image that he’ll want the racing to be hard to tire the legs of his contenders.

A team that do have a proper sprinter with them are Quick-Step and they bring young Colombian sensation Fernando Gaviria to the party. Touted as the “New Sagan” by some, there currently seems to be no ends to his talents whether that be sprinter or classics man. He was up there for a long time on today’s stage, doing a bit of work for Jungels, so he seems to be climbing well. I think he will surprise some tomorrow!

Francesco Gavazzi certainly surprised me today with his 5th place finish, I thought the finale would be too hard for him, preferring tomorrow’s stage. Therefore, if he went well today, he has a chance of equalling or bettering that result tomorrow! A rider much like everyone else listed, he packs a fast kick on a testy finish. Without a win yet this season, he’s finished in the top 10 of all of his one-day races so far, which isn’t a bad record. Another top 10 should be a certainty here, but can he go better?!

Jens Debuscherre might fancy his chances of maintaining contact with the head of the peloton on this finish. Much more than a fast finisher, he is a rider in the mould of EBH and Sagan. After a disappointing crash in Omloop, he’s picked himself up with a top 10 in West Vlaanderen midweek. It might be tough, but he’s not one to discount.

Old fox Daniele Bennati might just have a run at it tomorrow. He’s the fastest on his squad and the tougher finish will bring him closer to the likes of Sagan and co. It will still be a tall order for the win but a top 10 is possible.

Likewise, Oscar Gatto might like the look of the finish. The Astana rider had a very solid Omloop and is clearly in reasonable shape at the moment. One to keep an eye out for but again, a top 10 would be a good result.

With Caleb Ewan abandoning the race, Orica will probably turn to Luka Mezgec or Daryl Impey. Both present a good option for a top 10 finish.

I think the climb will be too tough for the likes of Viviani etc.

With Gavazzi springing a surprise in the chaos and sneaking a podium and GVA in there as well.

Would back Gaviria but not at that price so GVA actually becomes the value bet.

Thanks again for reading, I shall be back again tomorrow with another preview double-header. Anyway,