After the GP Etruschi last weekend, Italian Cup action returns this Sunday with the 54th edition of the Trofeo Laigueglia.

Last year’s race was won by a late attack from Andrea Fedi in the final kilometres, holding off a small group behind that had escaped on the closing circuits around Laigueglia. With Colbrelli edging out Bole in the sprint for second place.

After changing the route almost every other year, the organisers have this year stuck with the parcours that has been used in the past two editions.

The first GPM in Paravenna at 60km is 6.8km long, averaging 5.6% in gradient. Not overly tough for the peloton, but certainly a leg opener for later in the race.

We then have a descent and long flat section before the highest peak of the race at erm, ahem, Testico.

Now this climb was a real ball-ache to try to find figures for so I reverted back to what works best and made a Strava profile. 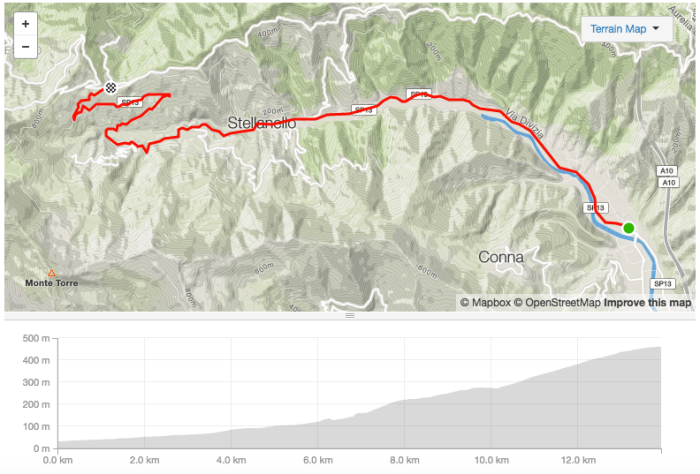 Now, including that long false flat drag, the climb is 13.9km at 3% in gradient. However, starting at the 7km mark, the remaining 6.9km averages 4.6% with some sections over 9%.

Again, it’s not really challenging for the pros but it will sap the legs for the closing circuit. Speaking of which…

As per, I’ve also made a strava profile that you can view here.

The first climb on the circuit is 2km long, averaging 7.8% with ramps of 15% around some of the hairpin turns. Climbing this 3 times with the pace on will certainly hurt and it is a great place for a group to go clear; like we saw last year!

We then get a fast descent, that starts off technical, before reaching the flat roads through Andora and back to the coast line. The road then climbs again for 1.5km, averaging roughly 9.5%. Crest the climb with a good advantage and you have a good chance of making it to the line as there is 2km of a shallow descent followed by a flat finish to home!

It’s only fair really to take into account the last two editions of the race as the course varied so much in the past.

Back in 2015, it was Lampre sprinter Davide Cimolai who managed to take the win. Beating Gavazzi and Tsatevich in a reduced 24-rider bunch sprint. Last year’s event, as mentioned earlier, was won by an attack from Andrea Fedi in the closing kilometres on the final downhill. He managed to hold off a pursuing group of 9 who sprinted for the remaining top 10 places.

I think we’ll see an aggressive race again this year, with maybe 15 riders at most coming home within 30 seconds of the winner.

Diego Ulissi has to start as the favourite for this race. 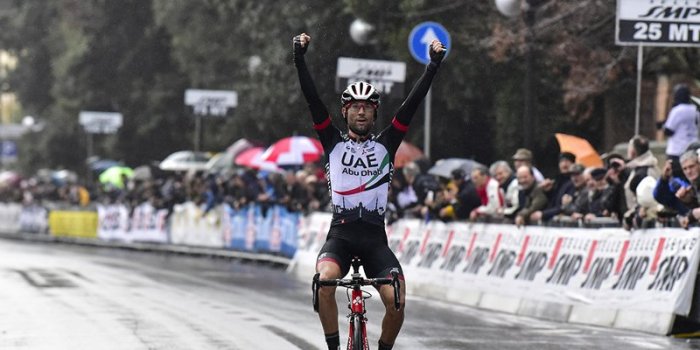 Off the back of a solid showing at the Tour Down Under, he went on to win GP Etruschi last weekend in miserable conditions. Attacking on the footslopes of the last climb, he quickly built up a good lead and was never seen again by the peloton. Making his move right at the bottom of the climb highlights to me the confidence he has in his condition just now and going off of that performance, he has every right to be confident!

However, the quality of climbers at Etruschi was not as strong as it is here this weekend so Ulissi won’t have it all his own way.

Etoile de Bessèges winner, Lillian Calmejane, arrives with a strong Direct Energie team. The young Frechman has the climbing ability to be able to match Ulissi here and will also be confident after last weeks showing. Having the likes of Chavanel and Voeckler to rely on will be a big aid for him. Being able to send riders on the attack and not have to follow everything, like Ulissi might have to do, should mean Calmejane is well rested for the final circuits. He is certainly capable of winning again this weekend!

Following on from his 3rd place in Etruschi, Francesco Gavazzi will be aiming further up the podium here. Not the best naturalised climber in the peloton, he will be hoping for a coming together in the closing kilometres and a reduced bunch sprint to the line.

Winning the only race he’s finished this year so far, Arthur Vichot will be hoping to continue his 100% record.

A rider who has promised a lot in one-day races in the past, he certainly has the solid climbing abilities and good kick to contend here. Has he recovered from his flu that saw him pull out of Bessèges?

Delko Marseille will have a couple of cards to play in the form of El Fares and Finetto. The former finished 4th in Marseillaise at the start of the year so seems to be in good form. Likewise, Finetto finished a respectable 7th in that race, before coming home 3rd in a stage at Bessèges; beating Samuel Dumoulin in a sprint. Finetto normally goes well in these types of races and I’ll be very surprised if he doesn’t manage a top 5 placing here!

Astana arrive here with an interesting squad, but I imagine it will be Moreno Moser who will be leading the team. The 2012 winner of this race has struggled in the past after his incredible neo-pro season. However, last year he seemed to return to form with good showings in the Giro and Vuelta and I expect big things from him this year again. With a return from altitude camp on the cards and no racing in his legs, it will be very interesting to see how he performs here.

The team with my favourite hashtag in the peloton, Willier Triestina, will be looking towards Pozzato to either roll the clock back or for Matteo Busato to continue the good progression he showed last year. Although he’s not taken a professional victory yet, Busato took a number of Top 10s last season, including a very impressive 2nd place on the final stage at the Giro del Trentino. Following a pretty much non-existant Dubai Tour, I’m sure he’ll want to impress back on home soil. #LoveMyWillier.

The Italian National team has three candidates to go well here; Felline, Trentin and Bettiol. All on their day have the credentials to take a podium place here but I’m unsure of what their current form will be like.

Other names to keep an eye on are; Andreetta, Bouet and Torres.

Ulissi is the clear favourite but I have a sneaking suspicion that Moser will be fired up for this race. He won’t get many chances to lead Astana this year so will want to make his mark nice and early!

There is absolutely no PFCL fantasy team bias in this preview at all…none…ok…maybe a little.

Thanks for reading and any feedback is greatly appreciated as always! How do you think the race will play out? Will it be a solo winner, or a reduced bunch sprint? I shall have an Oman GC preview out tomorrow evening sometime. Anyway,

mytwospokesworth Final year student at the University of Stirling studying Marketing and Sports, with a passion for professional cycling.
Published February 9, 2017February 11, 2017