I’ll not keep you long today…

Well I got that wrong! I was slightly concerned when Dimension Data hit the front at 7km to go. It was a good plan from them keeping Cavendish safe out of the tunnel but it seemed too early and indeed turned out to be. They ran out of riders at around 1.5km to go and Renshaw/Cavendish were left to surf the wheels. Quick-Step cruised past them with an expertly timed lead-out and from there it was plain sailing for Kittel!

Gronewegen did well to get up for second, he’s definitely becoming a threat for GC now if there’s no wind, and Cavendish held on for third, even with a flat tyre.

Onto tomorrow’s stage and another sprint on the cards… 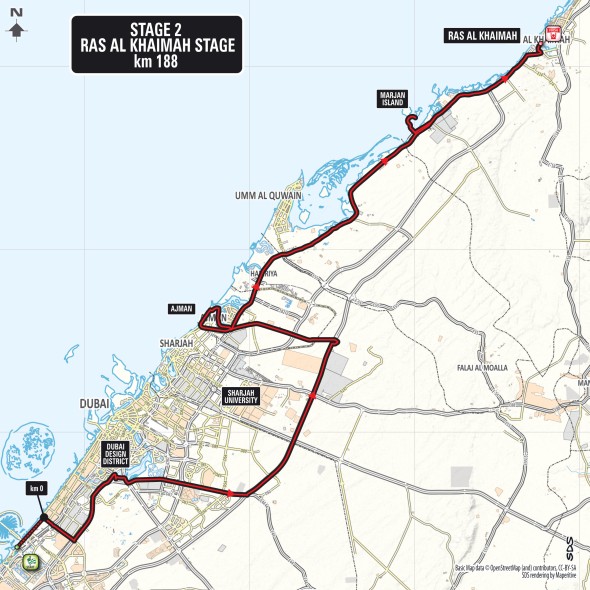 Nothing exciting about the route at all really! The wind isn’t strong enough to create echelons so it’ll be another day to just watch the last 10km of action.

We get a sweeping last 3km as we enter Ras Al Khaimah, with a left hand turn at 1.8km to go that we will probably see a race to itself. Although it doesn’t seem to sharp and the riders should be able to smooth out the turn.

With it being a two lane road, teams can still move up in the last 1.5km. Timing is very important!

There is roundabout with roughly 600m (?) to go. Google street view isn’t a thing here, so satellite image it is…

The local council here seems to spend more money on their roundabouts here and we get one where the riders will actually have to make an effort to go round. Whoever leads into the roundabout with 2 riders in front of their sprinter will win.

Can’t really see past the top 5 from today.

Kittel seems to be going really well just now and has a lot of faith in his train but will be lent on here to do much of the work. Cavendish will want to play it more conservatively this time and hope to do what QuickStep did to them today, pouncing in the final 2km. Groenewegen did well to get up for second considering how far back he was positioned. That positioning will let him down again tomorrow unless he gets left on the right wheel with 2km to go, I’m not too keen on his lead-out. Degenkolb got a bit lost today but looked strong in the finale. If he gets positioned well a podium is in his sight. Viviani and Sky tried their best Modolo impression, making a late charge but he wasn’t up to much.

No bet, although I am sorely tempted with an EW punt on Degenkolb at 20/1 as I think he can podium. But it’s an official no bet for the blog.

Thanks for reading! As usual, any feedback is greatly appreciated! I shall be back with something slightly more in-depth tomorrow if the wind keeps up. Might share some thoughts on Twitter about the other races this week later this evening. Anyway,