I had a lot of faith in Dennis writing this preview yesterday, but didn’t put any money down on him due to the combination of everyone else seemingly backing Dumoulin and the odds not being that great. The Aussie went on to prove everyone else wrong (I told you Rohan would answer) and took a superb win, knocking 7 seconds off of Dumoulin’s time in 2014! So I guess that’s some kind of blog win, right?

Also, when I suggested we might get a surprise or two today, I didn’t expect that to be Dumoulin and Martin being 20 seconds back and not finishing in the top 10! Few interesting names in that top 10, showing how varied a short, powerful TT can be at times.

Anyway, moving on to tomorrow’s stage and a finish we’ve had several times before.

Another fairly flat day (around 600m of climbing) that’s sure to end as a bunch sprint. This is all about the finale! 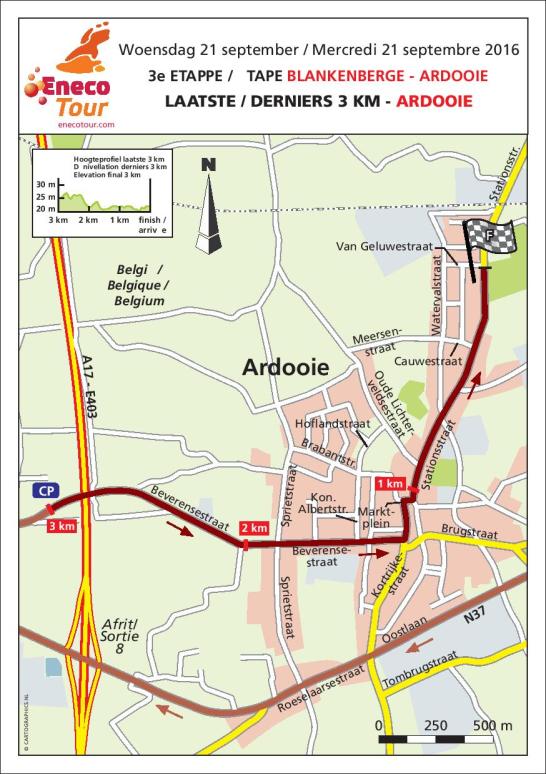 The finish itself is a technical one, that causes lead-outs to be disrupted. As we saw on stage 1, a simple run in can cause issues, so you can imagine what might happen here!

That left hand-turn around 1.2km to go is crucial for the riders. If their train can take that first, then they have a very good chance. As long as they have at least two riders in front of them, three would be ideal.

In the video above, you can see the closing kms. Ignore the ticker in the top left of the screen, it’s wrong (classic)! You can see the effect that the sharp left followed by the chicane has on the peloton. It gets very strung out. If a team has a few riders left here, they can keep the hurt on. The video above shows what happens if there is a slowing of the pace once the lead-out men disappear in the final 500m!

As highlighted on stage 1, there are a load of sprinters here so I won’t be going over them individually and in-depth. Instead, I’ll be focussing on the type of sprint we have and who might do well because of it.

Due to the finish being technical, you need to be fearless and have a good lead-out who can dictate the final 2kms. Obviously, this was in issue for every team on stage 1, but I think it will be different tomorrow and some trains will properly form.

Considering the above two conditions, the first name that sprints to mind is Nacer Bouhanni. The Frenchman was the fastest finisher on Monday but was blocked and squeezed out a bit. His train didn’t leave the station so to say and never really got going on St1. I can’t imagine Nacer will have taken that too well, and they’re sure to deliver a better performance tomorrow.

Groenewegen also has to be considered in a finish like this. He proved on stage 1 that he can pick the right wheel and can deliver the result at the end of it. A very fast rider, full of confidence, he’ll fancy his chances of doubling up.

Boonen won this stage last year, but Etixx will be hoping that Kittel can get the required space to flex his muscles tomorrow. His 9th place today on the TT highlights that he has indeed recovered from his sickness bug. Technical finishes aren’t his speciality but he’s by no means bad at them and he’ll accept nothing less than a win.

Sagan will look to get involved too and his incredibly bike handling skills and great tactical nous should see him on the right wheel coming out of the chicane. The way he’s riding, I would not be surprised to see him make the podium again and even take the win.

A rider I like for this stage is Nizzolo. He’s finished on the podium twice so knows the closing kilometres well, plus his lead-out train looks very good. If they can get 3 riders in front of him going into the first left-hander, he should be delivered to a perfect position. Can he hold on for the win?

Modolo and Ewan will find the technical finish much more suited to their abilities, while Kristoff, Greipel and Demare might struggle. Although the Frenchman is probably the best out of that 3.

Going with my gut while the rider might go with his nut! Bouhanni wins.

He’s in the top 3 sprinters here based on pure speed, his train is in the top 3, but most importantly he is fearless and incredibly motivated. I expect the Cofidis boys to sharpen up their act tomorrow, asserting their dominance at the head of the peloton in the final 2km. Managing to drop Bouhanni off in the perfect position and he cruises home for the win.

I say Nizzolo and Sagan round out the podium.

Thanks again for reading! Apologies for this being slightly shorter than normal, there’s just not that much to talk about. Who do you think will win the stage? As usual, any feedback is greatly appreciated. Anyway,