Well, the crossbar was well and truly hit today as Sky pipped Movistar by less than a second! I did think that the British team would be in contention, but that was very close. Both teams rode great negative splits, leaving almost a full complement of riders for the testing final climb. They obviously had read the preview 😉

The biggest loser on the day has to be Contador who shipped 52 seconds to Froome and Quintana; 46 to Yates and Chaves; and 45 to TVG/Sanchez/Atapuma. Not catastrophic, but not exactly ideal for the pre-race favourite!

A typical sprinters stage in the Vuelta, where they have to negotiate a tricky Cat 3 climb mid stage. They don’t do pan-flat here! 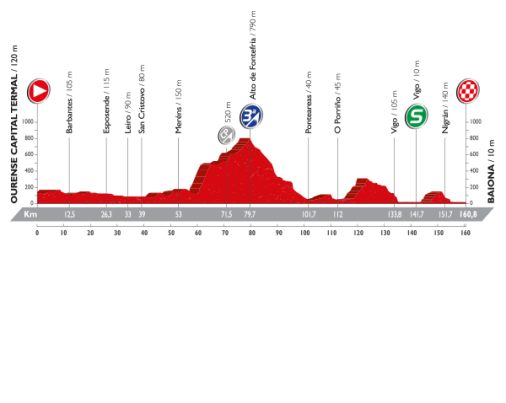 The profiles of the race make writing the blog more interesting, that’s for sure. I was initially intrigued at that little “bump” that crests around 10km from the finish, hoping that we would have another typical Vuelta, non-categorised climb at 5% etc. However, according to the little segment I made on Strava, it’s more a case of 6km at 2% average. Even going off of the Vuelta road book, it’s 4.2km at just over 3% average. This shouldn’t be a problem for the sprinters, especially the one’s we have here!

The riders will also be happy to see that it’s a flat run in, with no real turns at all within the final kilometre.

It looks to be set up perfectly for a pure and “proper” sprint where lead-outs, timing and raw speed will be important. Let’s have a look at the potential stage winners!

Due to the incredibly tough parcours this year, we don’t have any of the big name sprinters here. Instead, we have a lot of younger riders who will get a chance to show what they have on the big stage. All of the guys that are here can climb fairly well so the little bump aforementioned shouldn’t be a serious challenge for them.

The team with the best lead-out here is Giant-Alpecin, and they’ll be supporting young German sprinter, Nikias Arndt. They did a pretty poor TTT but oddly enough, one of the riders seemed to be smiling (looked like big T Ludvigsson) as they crossed the finish line. Maybe keeping something in the tank for tomorrow? De Koert & Waeytens will look to pilot Arndt in the final 500m, with the rest of the team doing work beforehand. He’ll probably start as favourite.

Arguably the fastest rider here, Niccolo Bonifazio has had a fairly poor season since his move to Trek, picking up only one win. However, he does have the raw talent and speed to go well if he’s on form. I just don’t think he’s there yet, he was a bit “meh” in Norway and I’m not convinced he’ll go well this early in the race. He’ll need to build in to it. In fact, Trek may turn to his team-mate Felline who as I pointed out in my San Sebastian preview will be one to watch this race. The flat finish doesn’t really suit him though!

A veteran in this field, Gianni Meersman will be Etixx’s chosen man. A rider with so much promise, he’s flattered to deceive as of late and I can’t see that changing here. Although in saying that, he will have a great powerhouse of a lead-out. Maybe he can hold on for a podium.

Magnus Cort Nielsen will get a rare chance to sprint for Orica in a Grand Tour. The young Dane was excellent towards the end of last month, but has had a few weeks off getting ready for this race. He’ll be able to count on a solid lead-out, including Tuft, Gerrans & Keukeleire. Orica are great at positioning their sprinters. I expect him to go well, but again, he maybe would have preferred a tougher finish.

Kristian Sbaragli will be Dimension Data’s option for the sprints. His one and only pro win so far came at this race last year. He’ll have an OK lead-out, not great, and might have to surf the wheels. My worry is that he’s too much of a “top 10” sprinter, and not a winner!

BMC will have to face the decision if it’s Gilbert or Drucker that they’ll work for, potentially even Dillier. Too many chefs? It will more likely be the latter on the flat sprints. However, like a few others, I think he flatters to deceive and goes well in the smaller races, going missing on the big stage. I could well be proved wrong here, but I doubt it 😉

Who else is left? Van der Sande, Van Genechten and Bennati will all be in or around the top 10. I look forward to seeing Goncalves (#GoOnCalves) have a go in the sprint, he should also be in the mix but isn’t fast enough on the proper flat stages. A top 10 would be a good result for him!

The opening sprint stage of a Grand Tour is often a chaotic affair, so I’m turning to a team who are great at timing the run to the line perfectly and are capable of positioning their rider well inside the final 200m. Therefore, I think Magnus Cort of Orica BikeExchange will win tomorrow’s stage. He looked incredibly strong in Denmark, and if he’s maintained his form he will be a real threat. I wouldn’t expect the OBE train to hit the front until the final 2/1.5km, guided by the experienced Sven Tuft. Then Gerrans and Keukeleire will take over, dropping Cort off perfectly with 150m to go and he won’t be caught! By doing so he’ll take the race lead as well. 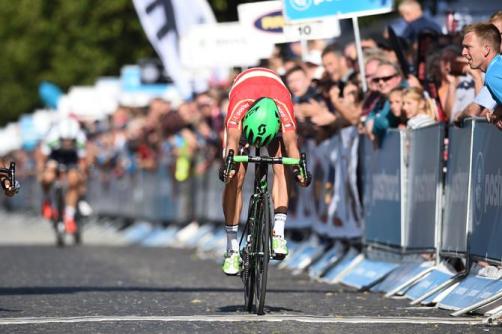 Confidence is key, but all of the sprinters will fancy their chances so it could end up being a messy one. Just making an early excuse for myself…

Hope you enjoyed the preview! Who do you think will win the sprint? As usual, any feedback and discussion is greatly appreciated. Anyway,