Another weekend and another women’s one-day race preview! This time we have the sister event to the men’s Ride London Classic that takes place on Sunday. Following its inauguration in 2013 the race has had a talented list of riders claim the title with Trott (2013), Bronzini (2014) and Guarischi (2015) all coming out on top.

This year the race has taken a step up, and has been granted Women’s World Tour status. Furthermore, the organisers have taken great steps towards equality in cycling by offering the same prize-pool (€100,000) for the men and women. Making the event the most lucrative one-day race in the world!

Now let’s have a look at the course.

The actual course itself isn’t overly challenging, a 5.5km circuit around some of London’s most famous landmarks/tourist destinations. 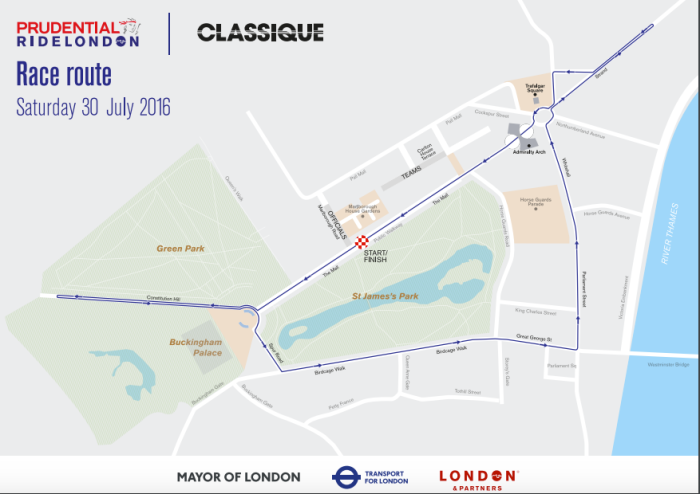 They complete 12 laps of the circuit, totalling 66km of fast racing. The race does gain some elevation. It’s nothing too worrying for the riders but it could be the springboard for some attacks.

As we saw last weekend, these short and sharp women’s races are full gas from the gun! The wide streets of Paris made it difficult for riders to sneak away, however, the roads here give the opportunists more of a chance tomorrow. There are a few narrow, technical sections where gaps can be made. This is particularly evident at the section of the route near Trafalgar Square. You can be sure that Drops Cycling will be very attacking!

Conversely though, the long sections of straight roads do not lend itself to a breakaway sticking to the finish line, with the most likely outcome being some kind of punch sprint. The startlist is packed full of sprinters who will fancy their chances of taking the win. Nonetheless, we may see a break stick if a large proportion of the strong teams have representatives in it, as unlikely as this may be.

I say a sprint finish is 90% the most likely outcome.

We have our winner from last weekend here: Chloe Hosking.  As usual, the Wiggle High5 team look very strong and much like last weekend, I can imagine Pieters will be given a free role to mark moves in the final 15km. Hosking herself will be very hard to beat in a straight up sprint, she delivered a very impressive and long sprint last weekend. Can she double up here? 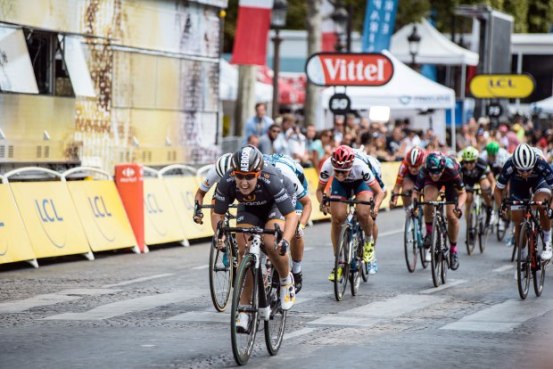 Her biggest threat could be Lotta Lepistö, last weekend’s runner-up. They both produced a similar sprint in France, taking it up from far out. The Cervelo lead-out was a bit all over the place then but I expect it to be better here. The key for Lepistö will be Joëlle Numainville who will no doubt act as the final rider in the train. She finished 4th herself last weekend, but was sprinting behind the Finnish rider. If they get it right here, they could be tough to come round.

Hitec Products main sprinter Kirsten Wild chose not to race at La Course last weekend. On paper, she is probably the fastest rider here winning the Tour de Yorkshire earlier in the year. She will definitely be heavily marked in the sprint and I’d expect a fight for her wheel from some of the sprinters without strong teams.

Canyon SRAM come here with only 4 riders but have 2 who can challenge on this type of course/finish: Hannah Barnes and Tiffany Cromwell. The latter managed to sprint to 7th last weekend and has been in good form lately, claiming a win at the Giro. Her young team-mate Barnes is British Champion and will want to go well on home roads. The criterium style racing will suit her.

Leah Kirchmann was left bitterly disappointed last weekend. Most of her team were unfortunately taken out in crashes so she was left to fly solo in the final sprint. She started too far back and could only manage 12th. Ably supported by an all-Dutch team, the Canadian will hope to right the wrongs here. A podium will be her minimum aim.

Other sprinters to look out for include Fournier, Rowney, Bastianelli & Confalonieri.

Who could spoil the sprinters party?

Some teams come here without any out and out sprinters so will hope to try and break the race up. The main team in this situation is Boels Dolmans. They have two very capable riders who can win from smaller groups or solo; Lucinda Brand & Thalita de Jong. Brand is probably the stronger of the two in a sprint so I imagine she’ll be the more protected rider, but I expect De Jong to try and make the moves throughout the race.

Cylance Pro Cycling will also no doubt try something similar with Carmen Small and Alison Tetrick being the more aggressive riders.

One team I’m looking forward to watching in action is Drops Cycling. The self-proclaimed “most professional amateur team” are a mix of mainly British riders who have been given the opportunity to race on the international scene, competing at the Women’s Tour etc. Their forte however is criterium racing, with Alice Barnes (Hannah’s younger sister) being their key rider. They’ll be prominent towards the front of the field, always trying to be in the moves. I expect a very attacking race from them!

As I’ve said above, I think we’ll get a sprint tomorrow. It may not be a full peloton, but it will be of at least 30 riders.

Cervélo (Lepistö) has the best leadout, Wiggle (Hosking) has the rider in form and Hitec (Wild) has the experienced sprinter. However, I think we’ll see a different rider win. Got to stick to blog tradition after all!

After a disappointing result last weekend, I think Liv-Plantur and Kirchmann turn it around here. An incredibly consistent rider, she’s really found her feet in Europe after her transition from American racing. Capable of climbing well, her main asset is her strong sprint. She took a strong sprint win earlier in March, but hasn’t taken a win since then, just numerous podium places and Top 10s. That changes here. Floorte Mackaij will deliver her perfectly within the final 200ms and no-one will catch her! 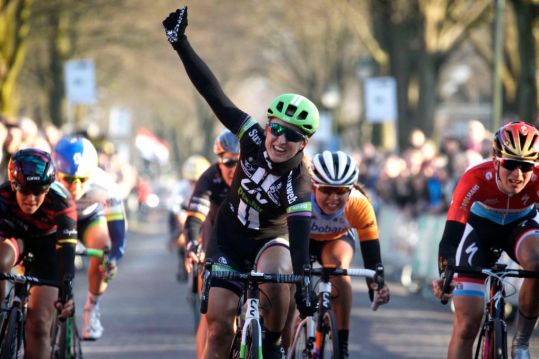 Who do you think will win tomorrow? As always, any feedback is greatly appreciated! Anyway,

mytwospokesworth Final year student at the University of Stirling studying Marketing and Sports, with a passion for professional cycling.
Published July 29, 2016July 29, 2016