Well, where do I start?

The stage started off frantically again and we only got a proper break on the Tourmalet itself. Only Pinot, Majka and TMartin managed to get any kind of gap. However, they were reeled in on the penultimate climb and Team Sky did their thing. On the Peyresourde we got some attacks near the top, with Henao and Quintana probably looking the strongest. Yet, it was Froome who made the winning move just over the summit of the climb. He made a daring descent (although was helped by those stalling behind, Quintana will be kicking himself as he should have covered the move) and held on for the win.

I remember hearing a while ago that Sky had a “secret training camp” during the Winter. I think we can all agree that it was descending (among other things) that their main focus was on. They’ve made a real improvement in that area this year.

As for the stage itself, the length of time that the break took to form was its own downfall. If it was established after only 30kms then the pace wouldn’t have been as high for the rest of the day. As it took until the Tourmalet to form, only the best riders could get away. It also meant that the time they could build up was limited. The blog picks never really had any chance because of this. Plaza and Clement were with the peloton over the Tourmalet but weren’t there for long.

The final stage in the Pyrenees will see the riders cross the border into Andorra, and another tough climbing route awaits them. 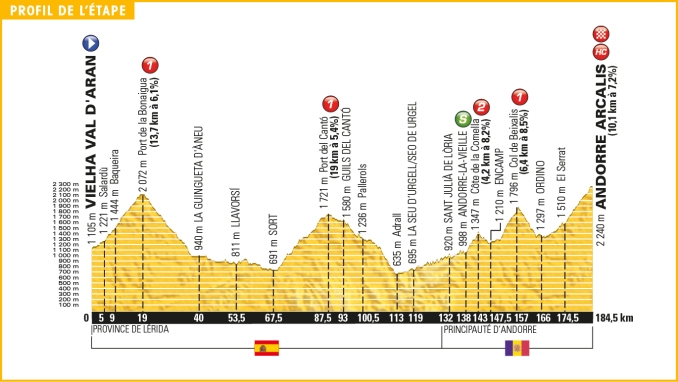 Starting off with a Cat-1 ascent straight out the blocks will not be music to the sprinters ears. Once again, there is no profile of this climb in the road book, but there is a Strava segment for it that you can see here. Going off the strava segment it’s 19.4km long at 6% with a fairly steady gradient. However, the stage profile seems to start further up the climb, and suggests it’s 13.7km at 6.1%. Either way, it’s a long and potentially (most likely) painful start to the day.

Once over the summit they have a long descent followed by another long period of flat/descending before the 2nd Cat-1 of the day: Port del Cantó. Again, there is no profile in the road book, so strava once again becomes useful. View the profile here. Both stage profile and strava seem to agree that it’s around 19km in length and a shade over 5% in average gradient. Not the most difficult but it will sap the legs. The sprinters will hope the peloton is on a go slow and that they can make it over the climb with the bunch. If not, they’ll have difficulties on the following sections.

After they reach the valley from the descent the road constantly rises up the intermediate sprint point. Three climbs are then tackled over the closing 50km.

The first two of these climbs both have tough stretches (over 9%) within them and average out at over 8%. However, the battle tomorrow will more than likely be left until the final climb of the day. Officially 10.1km at 7.2% this a very tough end to the day. There are a couple of sections of “respite” on the way up where the gradient goes below 6%, however these will only offer a small bit of recovery. It is interesting to note that the final km is shallower than a lot of the rest of the climb but it’s still not flat (averaging 5.3%). Will we see gaps made before here?

After the electric pace the past few days, I hope the peloton takes it easier tomorrow. To put it into perspective, the average speed of today’s stage where there was over 4000m of climbing came in at 37.1km/h. The previous days speed was 42.7km/h. Stage 6 (a sprint stage) was 40.2km/h. We’ll have a very dull 2nd week at this rate.

But with the race starting on a Cat 1 climb I fear we could be in for another fast day. Hopefully the senior riders see sense and call some kind of truce. Although I’m probably being wishful.

The stage tomorrow is a good one on paper for a break to get away. The long descents and flats are great to build up a lead. On the contrary, if someone dangerous gets up the road Sky could in theory control it quite well too with Stannard and Rowe doing the work. It really is 50/50. We could see a situation like Stage 20 of this years Giro where it all guns blazing from the flag drop, but I think it’s too early in the race for that. Remember, the Tour is won in 3 weeks, not 1.

I’ll lean towards my favoured outcome of two races, meaning that a break gets away and manages to stick this time. Sky already have their stage win and are in Yellow so won’t be concerned by the stage getting away. The only team I think who will stop a break tomorrow is Movistar. Mainly because the way Froome and Quintana were climbing today, I don’t think any of the other GC guys will fancy their chances against them up the final climb.

This of course all changes if we do get a GC threat away then Sky will have to chase.

Who are the break contenders?

Pretty much the same type of rider as yesterday’s preview so I’ll keep this fairly short and sweet!

Plaza. It would be sods law that the time I don’t mention him he gets into the break.

Diego Rosa. The Italian had a very easy day today rolling in with the gruppetto almost 40 minutes down on Froome. He’s a very classy bike rider on his day, and won a very impressive breakaway stage at Pais Vasco earlier in the year. Furthermore, he had a good showing at the Dauphiné too, finishing 8th on GC. He’s not done much here, I think that changes tomorrow.

Clement. Made one of the breaks today that was pulled back. I think he’ll give it another go tomorrow.

Tony Gallopin. A disappointing start to the Tour, he’ll now be targeting stage wins. Mountain top finishes aren’t his forte, but he definitely would be a tough one to beat out of the right break.

I’ll not heed the advice and thoughts of others and say that the correct breakaway stays and wins the stage. With a GC battle behind them. The rider who I think can stay out on this type of course is Diego Rosa. Maybe we’ll even see a similar celebration this time round?

I’m hoping for some exciting racing tomorrow but on two fronts. Let’s just hope one of the guys above makes it into the break! Enjoy the race wherever, you’re watching it from. The whole stage is to be broadcast on TV so that’ll be good! Anyway,