After being surprised by the Cavendish win on Stage 1, there was no real surprise with today’s winner: Peter Sagan. He looked so strong and effortless, and you would fancy him to hold onto yellow until at least Stage 7.  With the Green Jersey pretty much sewn up already!

Disappointed with Coquard, who put pressure on himself by saying that he was going for the stage etc. It was just too tough for him in the end, which I wasn’t expecting to be honest. Although in hindsight, he is the worst climber of the AGR contenders such as Matthews and Alaphilippe. Anyway, onto tomorrow!

A long day in the saddle and a relatively boring affair for the viewers. Glad it’s on the Monday, definitely one to tune in to in the last 20km.

Although the road rises and falls a lot, this is definitely a day for the sprinters and is all about the run in.

The first thing to note is that it’s not a flat final km.

It appears to rise 2.5% on average for that kilometre, although going off of the profile above the second part looks steeper with the first 500m being more shallow.

This will change the type of sprint that it is. You really can’t go too early otherwise you’ll burn up. Patience/a tactical brain and a strong lead-out will be very useful here. Speaking of which…

The run-in is also fairly technical too, with a roundabout and a few sharp turns, not to mention a 90-degree right within the final 400m. I wonder if as many of the riders will complain about this like they did in Switzerland recently!  Being well positioned through that final corner will be key, as coming from far back on an incline finish will really sap the legs and take a monumental effort.

The two Germans get their regular mention. Kittel will be hoping to go better than his 2nd on the opening stage. He could well do so, but off the top of my head I can’t remember him being overly convincing on a finish like this. Yes, he went well on Hatta Dam but they’re too different types of effort. However, with his characteristics he should be up there challenging but I just think there are other riders who are better at these finishes. For example, his compatriot Greipel.

He won a very similar finish at the Giro earlier in the year and with his better climbing ability (compared to Kittel) if I was a bookmaker I’d probably have him as favourite over Kittel. But I’m not a bookmaker, so that’s why he’s not my favourite 😉

Cavendish should be considered for this stage, but with all of his track work that he’s done, I think that will be a detriment to him on this type of finish. He won’t be top 5.

Someone who will definitely come top 5 is Sagan. Today’s winner has a very good chance of going back to back tomorrow. As I said in today’s preview, I don’t even think his sprint is at his best yet. A podium should be the least that he’s expecting.

Theuns went very well on stage 1 to come 5th and this type of sprint should suit him even more. With the crash on that stage hampering others lead-outs, I’m intrigued to see how he goes in a full sprint. He’ll be hoping to go top 5.

Our man from today, Coquard, will be hoping to bounce back in tomorrow’s sprint.

If you’ve read this blog for a little while, you’ll know how much of a fan I am of the “local rider” idea! He should be able to skip up this finale, and with Petit positioning him well, he’ll be hoping for a podium at least.

Others who could go well are Groenewegen, Kristoff and possibly Degenkolb.

I was hesitant to back the Aussie for today’s stage because of his crash yesterday, however he got through unscathed. It would have been an unfruitful back because he finished in 5th but it shows that he’s going well. This finish really brings him closer to the proper fast men, his stage win earlier in the year against Bouhanni proves that. I think he can go very well here tomorrow.

More of an outsider, I think pocket rocket Samuel Dumoulin could cause a bit of an upset and a stir here.

He had an exceptional end to May, but was a bit below par at the Dauphiné. However, he seems to be on the right track after coming 4th at the French National Champs on a very tough circuit. The incline at the end of the race will be no problem for him.

I’m finding it hard to narrow down this stage, but the name that keeps appearing in my head who could win out of several situations is the same: Peter Sagan. The World Champion finally got his Yellow Jersey and I’m sure he’ll be determined to get a stage win in it. Tomorrow represents a very good chance for that. 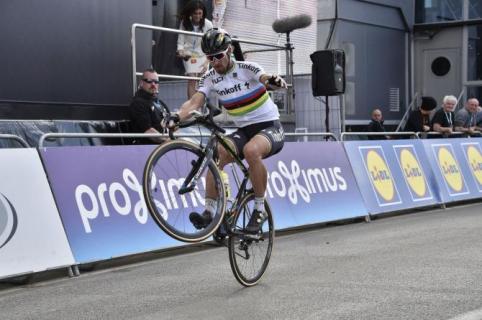 In a massive surprise, Coquard and Matthews to round out the podium with Sam Dum sneaking a top 5.

Doing something I haven’t done for a while and backing 4 riders for a sprint stage.

I wouldn’t be overly annoyed if you didn’t catch the majority of this stage, just make sure you see the final 20km!

Hope you enjoyed the preview, feedback as usual is great! How do you think it will pan out? Anyway,