Alaphilippe set the early benchmark but that was beaten by Froome, whose time stood all day until we got the rest of the GC favourites at the end. Contador put in a masterclass, toppling Froome and beating him by 13 seconds. Very ominous for the rest of the race! 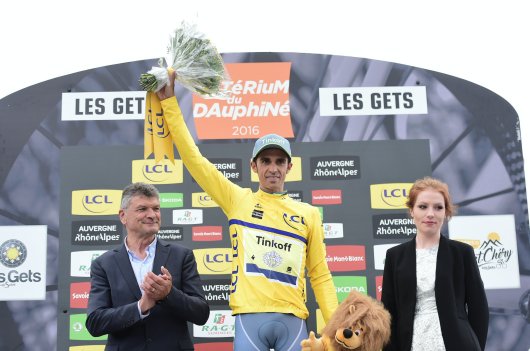 Credit has to go to Richie Porte who finished second. In the preview I wrote him off, but it looks like I’m having to eat my words. Some humble pie will be consumed later!

Our pair of Martin and Alaphilippe ended up 4th and 5th respectively. Close, but no cigar. Starting a blog with a 4th place finish is becoming a common occurrence (Ludvigsson at the Giro). Have to say, I’m disappointed with Aru’s time but there’s still plenty of racing left to come. Onto tomorrow! 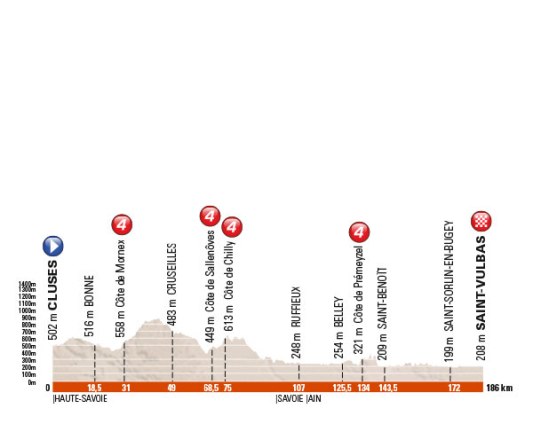 The usual morning break will build up a large advantage with the Pro-Conti teams being represented and one of them will pick up the KOM jersey. I say that’ll be Antoine Duchesne from Direct Energie.

A combination of Tinkoff and sprint teams will ensure the gap doesn’t get ridiculous and they’ll slowly be reeled in over the final 60km.

The finish in Saint-Vulbas is fairly straight forward.

As you can see, there are a few roundabouts in the final 5km but the last of those comes at 3km out. A few 90-degree turns follow but we have a long straight run in to the line. This sprint is all about speed and lead-out trains.

Bouhanni and Kristoff have to come into this stage as the clear favourites. They’ve both recently shown form and in this type of pure top-end speed, flat sprint, they’re a class above the competition.

Bouhanni has his favoured #2 with him here Soupe. I expect the Cofidis train to be Vanbilsen -> Laporte -> Bozic -> Soupe -> Bouhanni. A solid lead-out train but by no means amazing, they don’t have the power to take it up too early. One thing is for sure, the Frenchman won’t go down without a fight.

Kristoff has Vicioso -> Morkov -> Haller -> Guarnieri. As we’ve seen in previous races; if Kristoff gets left at the front with 150m to go, then he’s very hard to come round!

They’ve both been going quite well recently, but on a bigger stage here, will they continue their good form or flop?

Away from the top 2 there are other fast riders here. A lot of them. Every team has a sprinter of sorts.

Trek are greedy and have two! Both Bonifazio and Theuns could compete here and have the closing speed to beat the favourites. The main issue with them is that they’ll both want to lead the team. They had the same issue at Scheldiprijs when both of them seemed to sprint with Theuns finishing 4th and Bonifazio 3rd. Therefore it’s impossible to call who’ll be sprinting. I hope for their sake that one of them gets leadership for this stage and the other for stage 4. A nice clear-cut decision from the Trek management is needed!

Away from Trek, young Irishman Sam Bennett has a decent turn of speed. He also has his key lieutenant with him Shane Archbold (a.k.a The Flying Mullet). Bennett has had an underwhelming season so far, could he turn the page here?

Mountain-goat one day, sprinter the next? Julian Alaphilippe will be Etixx’s hope for the sprint stages. He has very good TTers to put him in position behind Kristoff or Bouhanni. The question is if he has the speed to come round them? I think not. 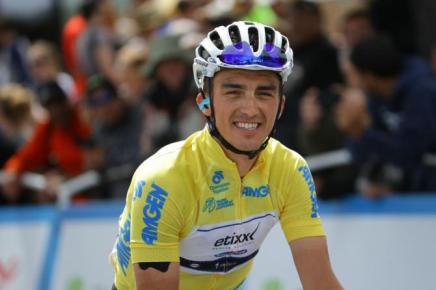 Gerrans or Impey could get involved for Orica, while EBH will be Dimension Data’s man. However, I think he’ll be targeting stages later in the week. He doesn’t have the top end speed to win here.

Moreno Hofland will have Teunissen at hand to lead him out, possibly try to copy Lampre’s one man lead-out tactic. While GVA will be BMCs man for the fast stages.

Has Degenkolb recovered from his injury at the start of the year? He did well in California so looks to be heading in the right direction.

Lotto Soudal will count on the Belgian Jens Deubscherre.

IAM will have to decide between Holst Enger and Van Genechten for the sprints. A top 5 would be a good result for them.

Finally, Samuel Dumoulin has won two sprints on the bounce, can he manage something against a step up in opposition here?

So in summary, Kristoff & Bouhanni on paper are the best, but there are a plethora of riders ready to take the limelight.

There will be a massive fight to get on the podium and we could even get a surprise winner, especially with neither of the favourites being overly convincing this season. However saying that, I think the feisty Frenchman has enough in the tank to win this one. He seems to be on better form on the pure flat sprints compared to Kristoff this year and is undoubtedly one of the fastest riders in the World if he’s up for it. He’ll want a win on home soil and on the big stage, reminding everyone that he’ll be there fighting at the Tour.

Back Bouhanni straight up for the win @3/1 (with Paddy Power) 2.5pts stake

Hunt around when more bookies price up, there’s a chance you might get better odds.

Hope you enjoyed the preview as usual! It will be interesting to see how the sprint unfolds tomorrow with so many contenders. Anyway,