Well, the idea of a breakaway succeeding was quickly thrown out the window and we got some more GC fireworks on today’s stage. It looked for a while that Chaves was going to be the major loser, with the race splitting massively on the first climb and the young Colombian being left in the second group on the road. However, it ended up being Nibali who was the main loser as those in the front group rode away from him, and Chaves who came up from behind, dropped him too. Up ahead, Valverde took a good win, meaning he now has stage victories in all of the Grand Tours. Kruijswijk was second and Zakarin 3rd. 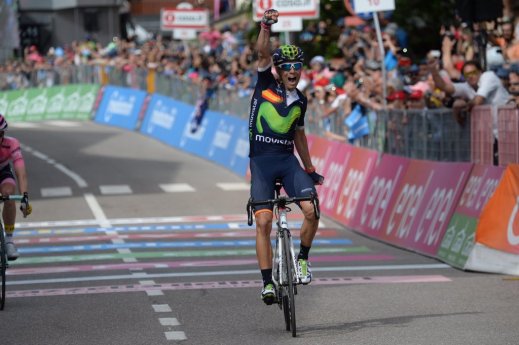 Annoyingly all three of the riders I mentioned in the preview were up the road at some point. Boswell was apparently in a big move at the start of the day that was brought back by Nippo. (Here’s a link to an interview with him post stage.)

Kudus escaped briefly along with Pirazzi and one other rider I can’t remember just at the bottom of the first climb of the day. They were quickly brought to heel as well.

And of course Dombrowski had made it into the elite group of 10 who had escaped up the road. Then he lost contact with the group on the flat. Some people are speculating that it was team orders, but it looked to me as if he’d taken a big turn at the front swung over and nobody came through. At this point there was a slight gap between the first five in the group and the second five. After Dombrowski had swung off to the side of the road I think he was caught napping and the remaining four powered away to catch up with those in-front. However, that’s all speculation/my opinion, so I guess we’ll have to wait for a press release from Cannondale to see exactly what happened.

Nothing much to discuss here, with only one cat-4 climb on the route and that shouldn’t cause the peloton any difficulty. Cunego will be looking forward to a day where he can have a rest and not try to get in the breakaway.

The actual finish isn’t that difficult either. The organisers have been kind to the peloton/sprinters here.

So a nailed-on sprint then?

Well you’d assume so. Both Modolo and Nizzolo haven’t won a stage yet and will be keen to get one in the bag before the final stage in Turin. Their main rivals have all went away, leaving them as easily the fastest sprinters here. There are some other teams with second-rate sprint options but they don’t compare to the two Italians.

A two-horse race then.

If there were more top-tier sprinters here then it’s a sprint day guaranteed. However, with there only being the two, other teams aren’t going to work to help bring the break back. In fact, the best move for them is to get a rider in the break, so that they can save themselves for the finale.

Lampre only have 8 riders, but they won’t use up Ulissi or Ferrari for the chase. Minus Modolo, they only have 5 left and they’re not exactly the strongest rouleurs in the World, they’re much more suited to hilly routes. Plus, we’ve seen Lampre cock-up a situation like this before (Final stage at the Giro last year).

Trek only have 6 riders, but again they won’t use up Alafaci (who I assume will be doing lead-out duties with BVP gone). Leaving them 4 riders to commit to a chase. They have stronger riders on the flat but will be shouldered with more of the work due to Lampre’s incompetences and the fact Nizzolo is the faster of the two.

Other teams are supposedly targeting the sprints, Dimension Data and Giant Alpecin namely. But as I said above, I don’t see them contributing to a chase when they’re really fighting for third place. Unless of course they miss the break of the day and get made to work on the front.

The real interesting team tactic for me though is how Lampre are approaching the Maglia Rossa competition.

After today’s stage, Ulissi has moved within striking distance of Nizzolo. Modolo really seems out of the picture and would need to win tomorrow and in Turin, hoping that Nizzolo does terribly in both sprints. I get the impression that all of Lampre’s eggs are in Ulissi’s basket. Ulissi I can envisage going on to win the stage into Pinerolo which would gain him some more points but with the points being weighted towards the sprint stages, he would need Nizzolo not to score any tomorrow. (Or very few).

Now, Ulissi could go in the break and try to take the 40 points on offer at the intermediate sprints, but that would be foolish. Doing so would mean Trek definitely would chase the break down, resulting in a sprint of some sort at the end and more points for Nizzolo. What Lampre really need to do is get someone in the BOTD and not chase, hoping that the likes of DD and Giant get someone in there too. Leaving all the onus on Trek to do the work. It’s a risky tactic, but after a tough, all guns blazing day like today, then it might just come off. The only thing with this approach is that Modolo has to be on side 100% and I think he will be. Sacrificing his own personal ambitions for the good of the team. Sprinters aren’t all that selfish, are they?

What does this all mean?

On a day where most will say sprint, I’m going to be my usual bold self and say a break makes it. (Because hey, it’s definitely worked so far this Giro…! 😂 😂 😂).

As said above, there will be too many teams that don’t want Modolo and Nizzolo dragged to the line as their rider will be sprinting for third. They’ll have a much better chance of the win from the break. Plus, with Lampre (and Ulissi’s) eyes fixed firmly on the Maglia Rossa they won’t want to gift Nizzolo 50 or 40 points.

If it’s hard enough predicting who’ll get in a break on a mountain stage, it’s nigh on impossible picking someone on a flat day with any confidence. The wild-card teams will feature, along with those who don’t have a stage yet. The IAM boys will be keen to get in the break to show their worth to new employers. Any Italian will fancy their chances. The list is endless. Well, once you go through all the riders I suppose it ends, but I digress…

I’m going to choose my rider, purely for the poetic nature of it all.

On National Escargot Day, Van Zyl never managed to get in the break. Like all snails, he’s a bit slow to the party and will make the break a day late, taking a most unlikely, but memorable victory. 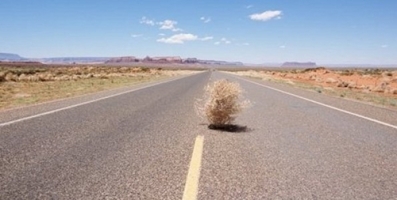 I can’t really advise bets for a stage like this. It should really be a no bet day, unless you want to back some breakaway candidates. I’ll probably have a look at the exchanges and see if I can get some riders at 500 or 600/1 + for fun.

Hope you enjoyed the racing today, because we could be in for a bit of a snooze fest tomorrow. As always, any feedback is greatly appreciated. Anyway,