Ronde van Vlaanderen, De Ronde or the Tour of Flanders. No matter what you call it, this race is one of the highlights of the early calendar and the first of the cobbled Monuments. It is a race steeped in history, celebrating its 100th year of participation in 2016.

With a mixture of cobbles and climbs (hellingen) it’s always a lively affair and only the strongest riders win, such as Roger De Vlaeminck (pictured above) who was on his way to win the 1977 edition of the race.

The pre-amble for the cobbled classics starts almost from the first few events of the year with hopefuls such as Alexander Kristoff, Greg Van Avermaet and Edvald Boasson Hagen all taking part in the Tour of Qatar way back at the start of February. However, the first indicator of what may lie ahead at the end of March comes with the double header of racing at Omloop Het Nieuwsblad and Kuurne-Brussels-Kuurne during the last week of February. From these races early season form can be judged and speculation around who’s in form and who’s not in form starts to circulate around the cycling Twittersphere. Early showings of intent were made by Van Avermaet, Peter Sagan, Tiesj Benoot and Luke Rowe at Omloop, surging clear of the pack on the Taaienberg. The strength of Rowe on this climb surprised me. I’d always had him down as a strong rider (in fact i had a bet on him at 50/1 for Omloop) but in my head he was more of a Roubaix man than a Flanders man, that attack made me think a bit more. Nonetheless, GVA bet Sagan in the up-hill sprint with Benoot 3rd and Rowe coming home in 4th. In consideration for De Ronde, KBK should be taken lightly as the latter is much more of a “sprinters” race. However, special mention must go to the young Jasper Stuyven who soloed away from a group (once again containing Rowe, with others such as cobbled-classic legend Tom Boonen) and the chasing peloton for an incredible win.

After that weekend, the riders go their separate ways, either doing Paris-Nice, Tirreno-Adriatico, some of the smaller one day races or going into training blocks. Glimpses of form once again could be noted from these races, i.e. Sagan and GVA looking strong in TA, plus a particular Swiss rider putting out awfully impressive numbers in that races final ITT…

All goes quiet in terms of cobbled racing until just over a week before De Ronde with a great selection of 3 races taking place over Wednesday-Sunday; Dwars door Vlandereen, E3 Harelbeke and Gent-Wevelgem.

Dwars was won in a sprint by Lotto’s Jens Debusschere after GVA’s late attack was reeled in with about 400m to go. GVA then went onto skip E3 due to illness. Michal Kwiatkowski ended up taking a superb win (I had backed him at 40/1) beating Sagan in a sprint, with fellow Team Sky team-mate Ian Stannard rounding out the podium. Two main talking points that arose from this race that people were keen to discuss are as follows;

Firstly, in my opinion when Sagan and Kwiatkowski went everyone else was on their limit, they were simply put, the two strongest riders on the day. Yes, Etixx had numbers but it was a 2v2 TT (Terpstra and Stybar were doing the majority of the work) and with the stronger riders up the road the gap stayed in equilibrium. Only when Boonen committed to the chase, along with a bit of help from Daniel Oss did they make any in-roads into the gap but by then it was too late.

Secondly, Sagan was just caught napping by Kwiatkowski. The Pole attacked when Sagan had just looked away from him and by the time he launched a sprint, it was too late. This on the outside seems very amateurish from Sagan, but Kwiatkowski was producing some big numbers… 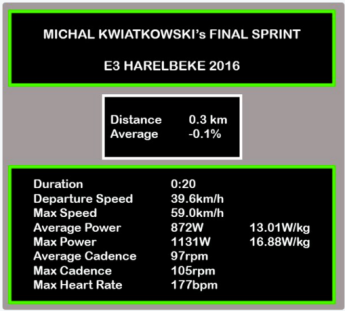 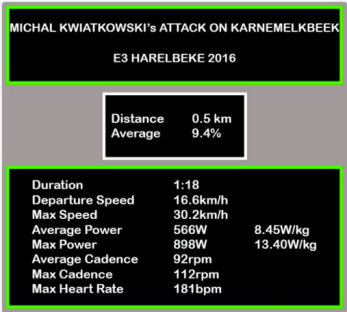 However, I made my opinions very clear at the time on Twitter that i thought there was something more to it than Kwiatkowski just being the better man. 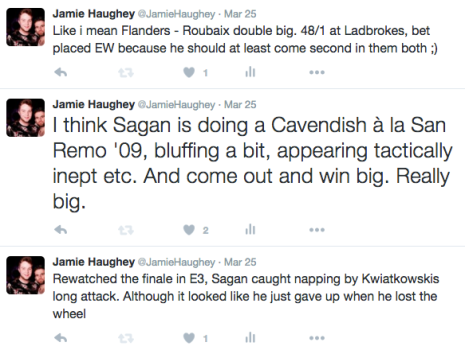 This wacky and pretty bold theory gained some traction after Sagan then went on to win Gent-Wevelgem on the Sunday: out-sprinting Cancellara, Sep Vanmarcke and Viacheslav Kuznetsov (?!) from a 4-man break. It was once again the manner of the attacks from that group that should worry the rest of the peloton come this Sunday. Cancellara, Sagan and Vanmarcke seemed to glide up the incline, with GVA and Rowe not too far behind. Sagan looked particularly effortless in my opinion.

Now that the build-up is over its onto the main event. I could bore you with an endless route preview and go through all of the favourites, however, I think there are others out there much better at that than myself. So go check out the guys at CyclingHub who have a very in-depth video run through of the starters and their favourites for the race. Or if something written is more your style (I kind of hope so if you’re reading this 😉 ) then go check out the super detailed preview from CyclingQuotes.

One reason why I find this sport so fascinating to watch is trying to predict the un-predictable. If everything goes according to form and plan on Sunday, I’d suggest a top 3 of 1-Sagan, 2-Kwiatkowski and 3-Cancellara. However, bike racing never exactly goes to plan. Some looking around and stalling by the a-list favourites could allow for one of the smaller riders to get away and take a memorable win, this opens the gate to a whole host of riders. I’d need about 25 or 30 if I wanted to list every possibility…

Team Sky have the strongest squad here in my opinion, they should have at least 4 riders left in the last 50km:Kwiatkowski, Thomas, Stannard and Rowe (if Stannard has recovered from his illness). They even could have Puccio or Moscon up there too. They will be the team to shape this race. They have to be in every move that goes, then once that gets brought back, go again. They have to wear down the likes of Sagan, Cancellara and Vanmarcke who will be devoid of team-mates or have very few at the end. I’d expect their 2 captains should be Kwiatkowski and Thomas (with Rowe and Stannard lieutenants/they’ll be leaders for Roubaix). The first two are specialists on the cobbled climbs and will be very hard to get rid of. Rowe and Stannard should be used as satellite riders and to cover attacks by other teams.

But after all that, I still can’t see them getting rid of all 4 of GVA, Sagan, Cancellara or Vanmarcke. And i can’t shake the idea of Sagan winning a Monument

In his Rainbow Jersey.

From a betting perspective, I have several ante-post bets that have been placed since the end of last year; Terpstra 20/1, Kwiatkowski 40/1, Thomas 50/1, Edvald Boasson Hagen 80/1 and Rowe 200/1. Plus I have that Sagan Flanders-Roubaix double. Therefore, it’s very unlikely that I’ll place any more bets before the race on Sunday, however, i may back some Head-to-heads but i’ll suggest those on my Twitter.

Looking at the odds as of now (late Friday evening/early Saturday morning), if you were looking to have a bet on the race then it’s hard to find value. However, I would suggest backing Sagan straight up for the win at 4/1 with Bet365 (or EW if you desire, you should get your stake back as he should podium). Or if you want an outside shot then I’d say someone along the lines of Luke Rowe at 50/1. He was strong in Three Days of De Panne earlier in the week but pulled out after he could no longer win GC and in a tactical race he may just deliver Team Sky’s first monument.

Congrats if you managed to get this far! Was unsure of how this would go and decided on more of an early season cobbled round-up than a proper race preview. Thanks again for reading and I’d very much appreciate any Retweets or feedback (positive or negative) on Twitter! If you enjoyed i’ll do more in the near future as I’m now practically finished University and have some (a lot of) free time on my hands…anyway,

mytwospokesworth Final year student at the University of Stirling studying Marketing and Sports, with a passion for professional cycling.
Published April 2, 2016March 30, 2017