Now a yearly staple for my blog, the Italian Cup starts this weekend with the 56th edition of Trofeo Laigueglia on Sunday. A tricky race for this early in the season given the punchy climb on the closing circuit, it is often a race decided by a reduced bunch sprint or a solo rider escaping over one of the climbs and arriving at the finish ahead of the rest. In 2018 we saw a rather electric attack from Moreno Moser on the penultimate climb, which completely blew everyone else away. By the end the Astana man, riding for the Italian national team on the day, finished with a 43 second buffer over the remnants of the peloton: the biggest winning margin in recent years.

Moser arrives here to defend his title and looking to complete a hat-trick of wins at this race. First though, let’s have a look at what is in store for the riders.

Identical to 2018’s parcours, the organisers obviously liked the one extra lap around the closing circuit that they added last year.

The early climbs of the Paravenna (6.6km at 5.9%) and Testico (8.47km at 3.7%) won’t be decisive but they’ll certainly sap the legs of the peloton. I’m thankful for the figures on the profile above as trying to find the length/gradients of the latter climb was a real ball-ache last year…

Moving swiftly on, the crux of the race is the circuit that we have around Laigueglia itself. 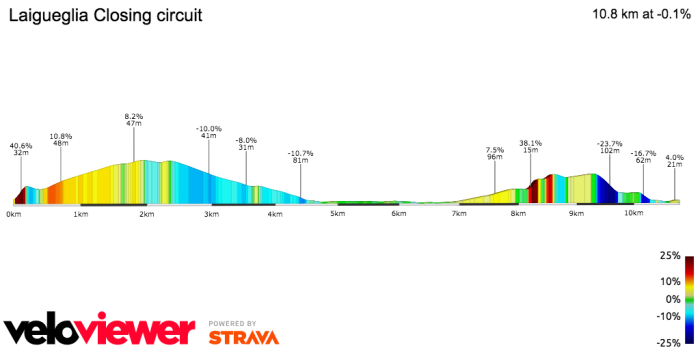 The toughest part on the course is the climb of Colla Micheri and that is the point at which Moser launched his winning attack last year, with Felline doing the exact same before going on to win in 2017. 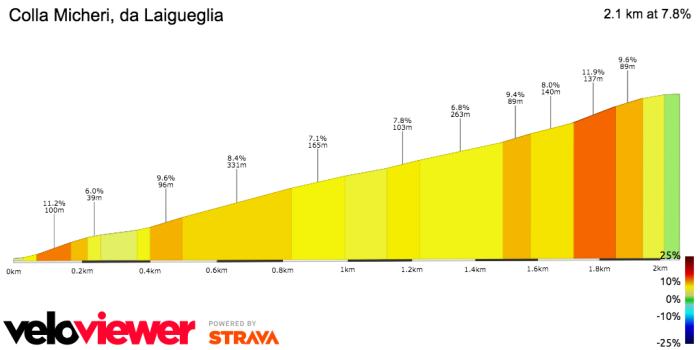 Averaging almost 8% for 2kms it will be attacked at a ferocious speed. Not long enough for a pure climber to make a difference, it certainly suits a puncheur that can hold a good amount of power for the 5 minutes it takes to get up it. Last year showed that the differences can be much greater on the final time up the ascent because of the extra lap and the more tired legs because of it. With the final 500m being the most important part and the area where the most hurt can be put on.

A fast descent follows before a few kilometres of flat and a final little kick up Capo Mele. It’s not a tough climb averaging only 3.5% for 1.9km but there are a few steeper ramps that can act as a launchpad if riders are stalling and looking at each other; just like Andrea Fedi did in 2016 before going on to win the race.

Once over the crest of Mele, the riders only have 2kms left of shallow descent and a flat run in to the finish.

Despite the race being .HC in category, we only have two World Tour teams at the start of the race. Although to be fair, that is an improvement on last year’s one! Consequently, it could potentially be an open race that is difficult to control but I think we’ll see things kept in relative check until the closing couple of laps as some of the Italian Pro Conti teams will more than happily share the pace making.

On the team of the defending champion, I think Canola offers Nippo their best chance of taking the race. A consistent rider after his return to the European peloton, his 2018 failed to live up to the incredible 2017 he had, although several top 10s and podium places to his name so it wasn’t too bad a year; it was just a win that eluded him. He can climb well on the short slopes and with his fast sprint, he is a good candidate for this type of parcours. Having already got some racing in his legs over in Valenciana, he’ll be wanting to put that to good use tomorrow.

The current French champion will most likely be Groupama’s man for the day but without any racing for him so far this year, it is hard to know where his form is at. Last season was re-breakthrough (if I can call it that) year for the 31-year-old with him managing to take three victories and some other strong results including an impressive 3rd place in San Sebastian. If he is close to a similar level like he was on that day, then he should be in the mix here. I’m just not too sure if he will be.

The 2017 U23 World Champion had a solid neo-pro year with AG2R in 2018, with the highlight being a 3rd place in his last race of the season at Paris Tours. Spending the opening part of the season in Australia saw the Frenchman get some racing in his legs, where he picked up an 11th place finish in Cadel’s race. A bit of a punchy all-rounder, he theoretically should be able to go well here and I imagine he’ll lead the AG2R squad.

Fabio Felline and his Trek buddies.

Winner in 2017, the Italian will once again ride for the national team and as a “squad” they are looking for their third win in a row at this race. With a mix of youth and experience in the team to help him, Felline will be confident of being at the pointy end of things come the finale. His 2018 wasn’t as strong as his 2017, but he did seem to finish the year off well and pick up a few good results. This season he’s already been racing in Spain and France, with a 9th place finish overall in Bessèges. One of the massive advantages that Felline has is the strength of his team, with both Ciccone and Brambilla potential winners of this race as well. With all three of them riding for trade-team Trek Segafredo, they should be able to communicate and work well together on the day. Whether that admitting your legs aren’t good, or bouncing attacks off of each other. I would be very surprised if we didn’t see one of them on the podium.

The whole of Androni, basically.

Looking at the teams, Androni have the most amount of riders who I think could win this race with Gavazzi, Cattaneo, Busato and Montaguti all potential candidates. Without any real fast climbing-sprinters at the race, I think Gavazzi would be the team’s best shot at winning in a reduced gallop to the line. However, I do expect them to be one of the teams to animate the race so they might try to avoid that outcome if possible, with maybe Cattaneo or Montaguti riding solo to the line.

In the twilight of his career, Visconti switched teams in the winter and returned to his former PCT outfit now known as Neri Sottoli, in the search for some more personal success and to help the younger Italian riders. On paper, this is a parcours that is made for the Italian with the short punchy climbs suiting his characteristics. He made a slow start in Argentina but now back on home soil he is a threat and one that most of his opposition will have an eye on.

Given the large amount of Continental teams here, there are a few riders who could pull out a surprise performance. Others to watch include Paolo Totò of Sangemini who was second here last year; Marco Tizza of Amore & Vita; plus youngster Andrea Bagioli (Team Colpack) who I think will be a star of the future.

Looking at the strength of their team, I would be surprised not to see the Italian Trek conglomeration make it three wins in a row and I’ll go with Felline to be that man. 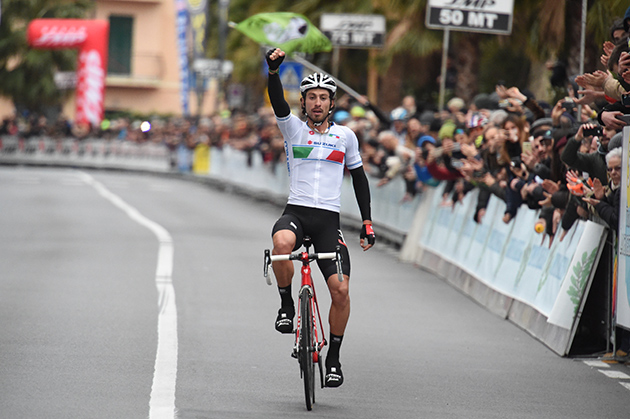 Thanks as always for reading, who do you think will win tomorrow? Anyway,