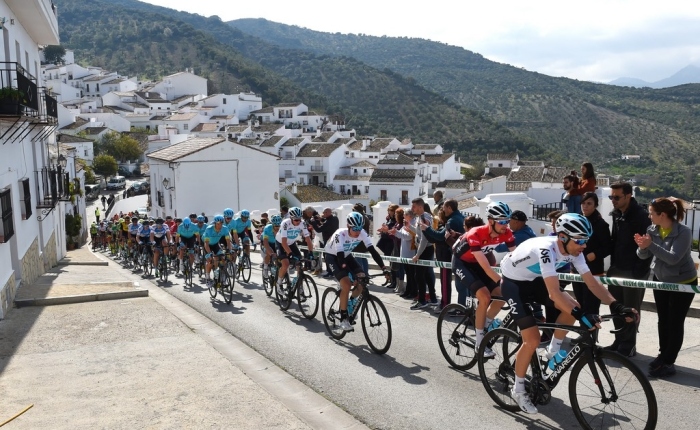 As I’m doing both Andalucia and Algarve previews this afternoon, no GC funny business here – straight into the opening day it is!

With no real mountains the stage looks quite simple on paper, but given the constant rolling nature of the parcours and the sting in the tail that awaits the riders: it certainly isn’t the easiest start they could have had.

We’ll no doubt see a fight between some of the Pro Continental teams to get into the break and try to take the KOM jersey but in terms of other action for the stage, don’t expect much until the closing 10kms, with everything building to a crescendo.

Some of you may recognise the finish climb from last year’s edition of the race, with it being the finale of Stage 4, which saw Tim Wellens power away from everyone. However, the approach into the town itself this year is a little different. 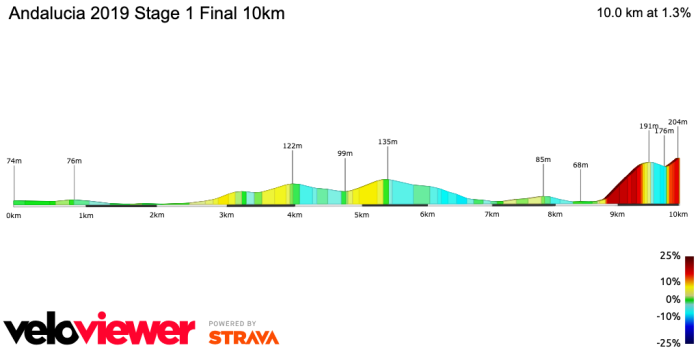 Last year it was mostly all a steady downhill until the foot slopes of the climb but as you can see on the profile above, there are a few short rolling kickers to contend with first. Nothing to worry about for the peloton as they’re all roughly 500m long and average about 5-6% but they will be taken at race pace and probably sap the legs a little as the fight for position begins.

With around 2.6km to go it is the exact same finish that we had last year so it is worthwhile to watch that again. You can find a video of the finish here, just skip along to around the 42 minute mark for those closing kilometres. 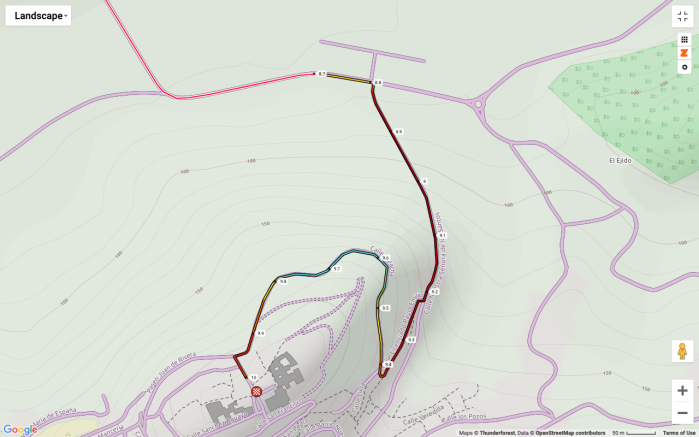 The fight to get to the right hand turn with 1.3km to go will be very important, as the climb starts in earnest as soon as you leave the main road with immediate double-digit ramps. Consequently, being at the front of the bunch allows you to carry more speed through turn and saving you a vital bit of energy. 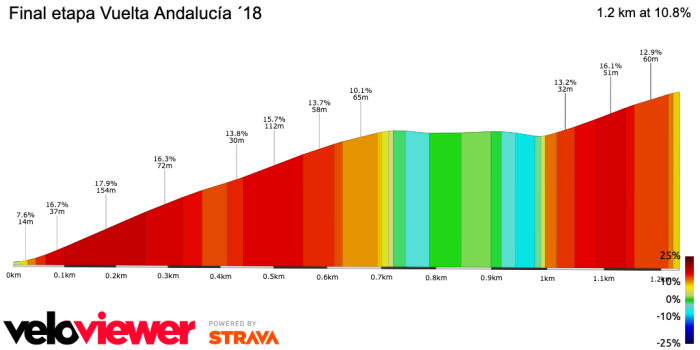 Having team-mates in the opening few hundred metres is helpful and we saw Lotto Soudal utilise that tactic well last year but with it being Wellens and Landa at the head of the race with 1km still to go – this is a stage about pure power and climbing legs.

The road surface on some parts of the climb is pretty terrible too with riders having to use storm drains for a smoother ride. This again highlights that being at the front of the peloton is a pretty good idea for this climb!

One crucial point of the climb that I picked up on last year was this slight turn off of the shallow descent. Landa led Wellens through here, but the latter carried a lot more speed and was in a better gear to power himself past the Spaniard as the road started to rise again. It looked as if Landa had to alter his pedal stroke to change gear and that ultimately cost him the stage as he couldn’t get back onto Wellens’ wheel again.

I really enjoyed the finish last year and I’m more than happy to see it return this year! Let’s have a look at who might be competing for the win and the first leader’s jersey of the race. 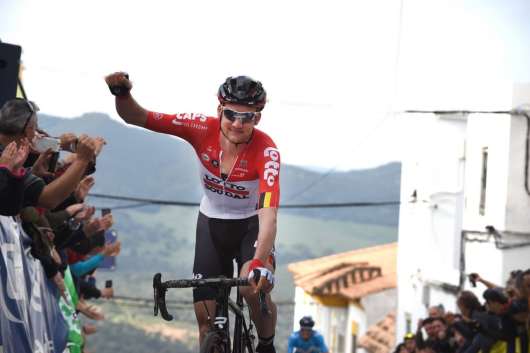 It’s only fair to start with last year’s winner with the Lotto rider hoping to double up this time round. As seems to be tradition now, Wellens started his 2019 very strongly in the Spanish Trofeo races winning one of them, with the other two results being 2nd and 5th. He was meant to ride Etoile des Besseges but had to skip it due to a viral infection and consequently missed almost a week off the bike. However, his coach seems to think that it shouldn’t be an issue and that he’ll be ready to contest for stage wins and a good GC placing this year. We’ll have to wait and see but a fit Wellens would be a favourite for the stage once again.

With a win already under his belt this year in Valenciana, taking the day at the very tough and steep finish in Alcossebre, Yates will be relishing another opportunity on a short but steep climb here tomorrow. He normally is good on these shorter steep ramps and after a slightly disappointing 2018 where he was in his brother’s shadow, he’ll want to step up again this year. The finish tomorrow provides a great opportunity for him to get an early second win under the belt this season.

Would it be fair to say he was the breakthrough rider of the year in 2018? Although he was a strong rider before that with good GC places in the Tour and Vuelta, it was last season that he really upped his level. With the well documented cracking at the Giro, Yates bounced back with a very mature and strong ride to win the Vuelta. Like his brother, he can fly up the steep slopes when he wants to but given this is his first race of the season, I’m not sure where his form is at. On the team’s website, he says to get some racing in his legs and support Haig and his brother. Just a bluff or is he being truthful? We’ll find out tomorrow.

One of the early form teams, the Kazakh outfit are flying at the moment and I don’t see that changing here. They have an incredibly strong group with them at this race and on their day I could feasibly see any of Sanchez, Bilbao, Izagirre or Fuglsang win tomorrow. Honestly, trying to pick who out of them will go the best is tough but I would possibly argue Bilbao as he looked the strongest on the steepest finish in Alcossebre. I imagine they will all be given a free role tomorrow in the hope that they can be near the top of the order to put the pressure on the other teams later in the week. 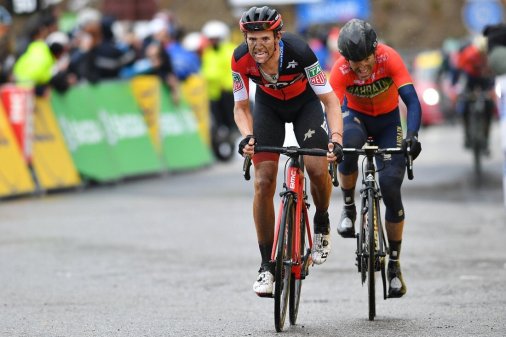 He was my pick to surprise everyone with an attack on Alcossebre but after apparently suffering a puncture with just less than 10km to go he had wasted too much energy fighting back and couldn’t follow the best. As a rider who has contending for the win and finished on the podium at Fleche Wallonne, a 1.2km steep climb tomorrow looks perfect for him and I fully expect him to be in the mix. With Colbrelli taking the team’s first win in Oman today, the pressure is somewhat off them a little tomorrow. Will that help Teuns out?

I named the young Colombian as my wildcard for Alcossebre and he certainly continued to impress there. His diminutive stature and low weight should theoretically help on the steep slopes compared to those more gravitationally challenged but with the dodgy road surface tomorrow, he might actually struggle to get the power down if he’s dancing on the pedals. Nonetheless, I expect another top 10 from him with another strong performance.

It’s weird to see Movistar with such an underwhelming GC team for a race in Spain but they do have a possible outsider for the opening stage. Prades had a breakthrough year in 2018 winning the GC in Norway and Turkey, while picking up some good stage results throughout. Already this year he’s taken his first victory with a stage win in Provence, on a day that featured a brutally steep climb before the finish. Obviously that’s different from a race actually finishing up a steep climb but he’ll be hoping to improve on his 12th place here last year.

I think it will be a Wellens vs A Yates vs Teuns vs Astana battle, but I think the former might still be a little flat after his illness. Hmmmm, it’s got to be Adam Yates, doesn’t it? 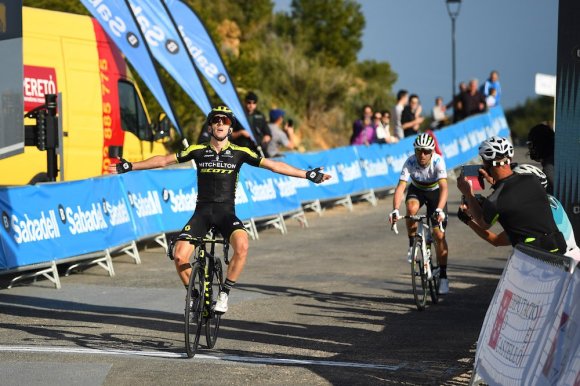