De Gendt does a De Gendt!

The Belgian breakaway expert attacked from the morning move on the final climb of the day and managed to hold off the chasing pack behind. A counter-attack from some GC riders was caught by the peloton just on the line but Simon Yates and Pinot sprinted from that group to podium places.

The result means that De Gendt is the new race leader as the race heads towards the mountains tomorrow.

We have the now traditional finish atop La Molina.

A stage that is very back-heavy with climbing, it becomes the new Queen stage in that sense after today’s re-routing.

The Coll de Creueta is a long, long climb and is the first HC test of the race. It really depends where you start the official categorisation but the road rises from the feed zone.

According to the profile above, the climb is 20.5km at 5.2% in length and it climbs all the way to 1925m of altitude. It’s actually quite an irregular climb with a kilometre at 9% followed by a kilometre at 3% for example. The steepest 3kms to come at the top and given there are just over 30kms to the finish from the summit, will it entice some attacks?

A long descent is briefly interrupted with a kilometre or so of climbing before the riders once again take the plunge down the valley and head towards the last challenge of the day.

The La Molina climb can be split into two parts; the longer first two-thirds before a short descent and kick up to the finish. 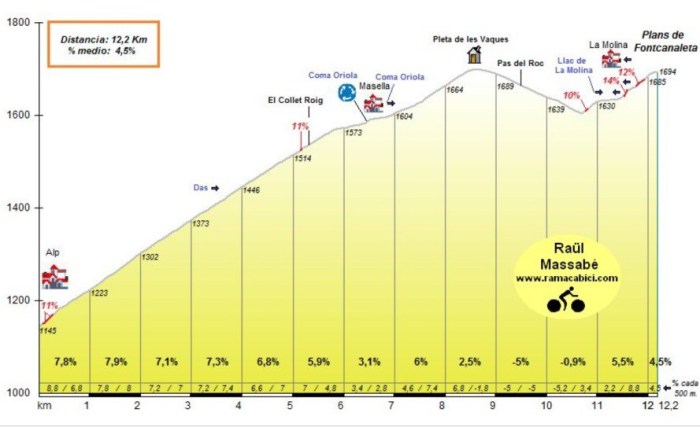 As a whole it averages 4.5% for 12.2kms but the opening 8.6km average a tougher sounding 6.5%. Nonetheless, it isn’t the most difficult climb when taken in isolation so if teams want to make it difficult for Valverde, then they’ll need to be aggressive on the penultimate climb of the day.

There will be a slight headwind for part of the penultimate climb but fortunately for us the viewers it will be mostly crosswind. Then once we get onto La Molina it will be a cross-tail wind which I’m hoping will make things more exciting!

It has to be raced aggressively, otherwise Valverde will probably win on La Molina or at the very least podium (gaining more bonus seconds) and he’ll more than likely do the same on Stages 5 and 7 if they make them GC days as well.

The unfortunate thing is that most teams don’t have several GC cards to play but more importantly, Movistar have three themselves!

If an attack does go on the penultimate climb, expect either Valverde, Quintana or Soler to follow. Ideally if you were on another team you would want Quintana as you might fancy your chances in a sprint against him, but then again, it does come after a lot of climbing and the Colombian did look sprightly today.

I think we’ll see an attack go on the penultimate climb and with a rider from each of the big teams (FDJ, Sky, Movistar and Mitchelton) then the move might just well stick. If only two of those teams are represented then I think it will be brought back on the footslopes of La Molina but otherwise it will stay the whole distance.

Given how open the race still is, a lot of teams have quite a few guys who are still in contention for the overall.

Then we have teams where there is only one guy who really will be able to challenge such as Kirby’s favourite buzzword at the moment “Latour”.

In hindsight, taking away Vallter today has made tomorrow a lot more interesting. Or at least in my head it is going to be interesting which inevitably means we’re going to get a dull day of racing where everyone waits for La Molina!

An attack goes on the climb of Creueta that destroys the GC group leaving a group of 9 up ahead that includes all three Movistar riders. Once onto the descent and the footslopes of La Molina the gap continues to grow to those behind as the majority of the other teams have riders represented.

We see more constant attacks on La Molina as no one wants to tow Valverde to the sprint but every move is followed by a Movistar rider. Eventually the elastic snaps and we see Quintana, Gaudu, Woods and Valverde escape the group; they are kept on a fairly tight leash but those behind can never close it down fully.

Quintana buries himself in an effort to drive the group and help Valverde take the win but he is caught napping by a flying Canadian who shows that same explosive kick he had in the Vuelta last year, attacking early in the final 500m to take the win. Valverde nearly catches him on the line but it is too late, however, the bonus seconds are enough to see him move back into the GC lead!

Thanks as always for reading! Who do you think will win tomorrow? Will we see an exciting and explosive stage or will it all come down to La Molina? Anyway,